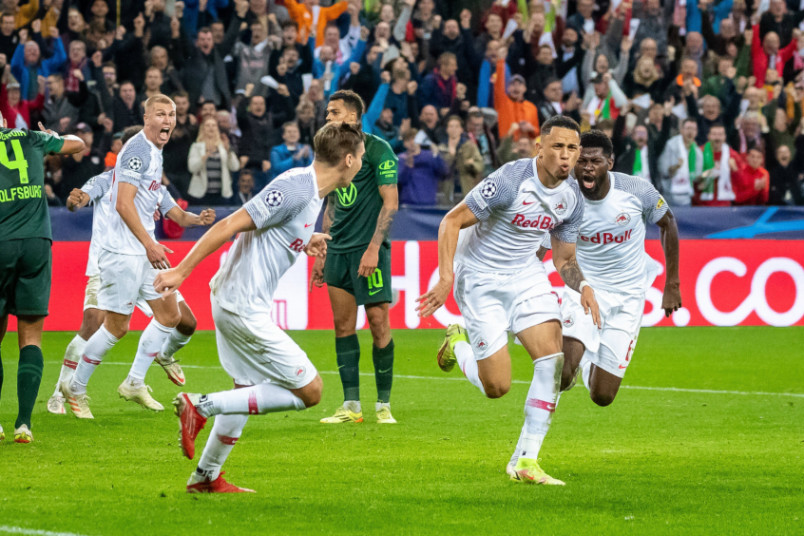 “I think it was a fast-paced game where we played our way on the pitch for almost 90 minutes,” Red Bull Salzburg coach Matthias Jaissle said. “I am extremely proud of the team. In the second-half, we brought on a few more horsepower onto the pitch. A win like that gives the team a lot of self-confidence. Now it’s finally time to be able to enjoy Champions League games because the results are right this year too. A really great evening!”

Staying in group G, Timothy Weah subbed on in the 82nd minute of Lille’s 0-0 home draw with Sevilla. Sevilla finished with six shots on target to Lille’s two. Red Bull Salzburg leads group G with seven points from three games. Sevilla is in 2nd-place with three points with the tiebreaker separating Lille and Wolfsburg on two points.

Jordan Pefok subbed out in the 69th minute of Young Boys’ 4-1 home loss to Villarreal in group F. Trailing from goals in the 6th and 16th minutes, Meshak Elia scored for Young Boys in the 77th. Villarreal added goals in the 88th and two minutes into stoppage time.

Moving to the Championship, Tim Ream and Antonee Robinson’s Fulham shutout Cardiff City 2-0 at home. Tom Cairney scored in the 57th and Aleksandar Mitrovic doubled the lead in the 63rd minute.

“It was important, the first goal,” Fulham coach Marco Silva said. “It is always important for us, the game will be more open. We know the space will be there as well. 2-0, we deserve the three points clearly for us, clean sheet and important to see an important player like Tom come back and help us with the first goal.”

Duane Holmes subbed out in the 87th minute of Huddersfield Town’s 0-0 home draw with Birmingham City. Matthew Olosunde wasn’t in the squad for Preston North End’s 2-1 home win over Coventry City. Trailing from the 45th, Patrick Bauer equalized for PNE in the 61st and Emil Riis Jakobsen scored in the 69th minute.

In the soccer news, the MLSPA updated its MLS salary guide through the end of September. MLSsoccer’s Andrew Wiebe goes through what we learned in MLS week 31. The Guardian’s Paul MacInnes reports on the situation with the biennial World Cup plan. ESPN’s Rob Dawson works through Manchester United’s situation so far this season. The Ringer’s Ryan Hunt asks why FIFA and UEFA are pushing for more games.

Premier League on NBCSN: Arsenal vs Aston Villa at 3pm. Ligue 1 on beIN Sport: St Etienne vs Angers at 3pm. Primeira Liga on GolTV: Vitoria Guimaraes vs Maritimo at 3:15pm. Liga MX on TUDN: Mazatlan vs Queretaro at 10pm ET.