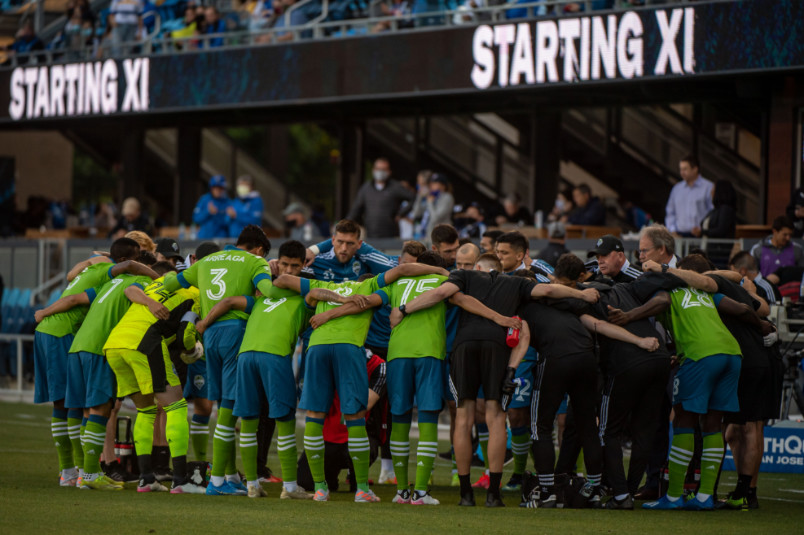 Tuesday’s soccer news starts with the Seattle Sounders back in action later tonight at LAFC (10:30pm ET – ESPN). Considering how dominant Seattle was over the opening months of the season, it’s tempting to call their current situation a dip in form. Except we’re talking about the team in 1st-place in the Western Conference. The Sounders are on a three-game winless streak, most recently losing at home to 2nd-place Sporting Kansas City. Their lead is still three points, but it’s Sporting with a game in hand and the momentum heading into the full Wednesday schedule.

Should Seattle and Sporting win their remaining games, they’d be level on the total wins tiebreaker. That would push the Western Conference title to goal difference, where Seattle currently leads +23 to +20. That’s the long way round to get to a not insignificant issue for the Sounders. Right now, they’re not completely in control of their own destiny. Winning out might not be enough.

With that in mind, the schedule and the situation once again throws the spotlight on a Seattle game. As much as LAFC needs the points to even make the playoffs, Seattle is holding onto 1st-place right now. Inserting desperately into that sentence is easy enough, but consistency has been an issue for the Western contenders. That’s the reason we’re not talking about the 3rd-place Rapids in the same scenario. They’re tied on points with Sporting with an extra game played, but trail on total wins.

Colorado’s scenario requires an opening. If all three teams collect the same number of points over their remaining games, the Rapids remain 3rd. They need more points to pass the teams in front of them, not helped by playing at New England on Wednesday. Houston is no longer a given either, considering that they beat the Sounders. The Rapids finish at home to LAFC on Decision Day.

After tonight’s game at LAFC, Seattle is home to the Galaxy and then at Vancouver. Sporting KC hosts the Galaxy on Wednesday, is at Minnesota, at Austin, and closes out the regular season with a home game against Real Salt Lake. All three of those schedules present issues. Houston already showed that a team out of the playoffs can disrupt the top of the table.

“We’re pretty consistent,” Seattle Sounders coach Brian Schmetzer said. “So yes, it was a gut punch. The Houston game we drop points. We dropped points earlier on in the year. There was a stretch of games we took one point out of nine at home or something like that. So we’ve had those little bumps in the road, but we’ve always come back. And look, let’s be honest. We’ve got three games to go. There might be a blip in these three games. But that doesn’t, I still have confidence in. Nobody’s going to want to play us in the playoffs home or away.”

Mix Diskerud subbed out in the 84th minute of Omonia’s 1-0 loss at PAEEK in Cyprus. PAEEK scored in the 34th minute. Romain Gall wasn’t in the squad for Orebro’s 2-1 home loss to Degerfors in the Allsvenskan. Trailing from goals in the 25th and 33rd, Agon Mehmeti scored for Orebro three minutes into stoppage time.

DFB Pokal on ESPN Deportes: Gladbach vs Bayern Munich at 2:45pm. SPL on CBS Sports: Hibernian vs Celtic at 2:45pm. Ligue 1 on beIN Sport: Nice vs Olympique Marseille at 3pm. MLS on FS1: Sporting Kansas City vs LA Galaxy at 8:30pm. UniMas has the Mexico vs El Salvador friendly at 9pm ET.