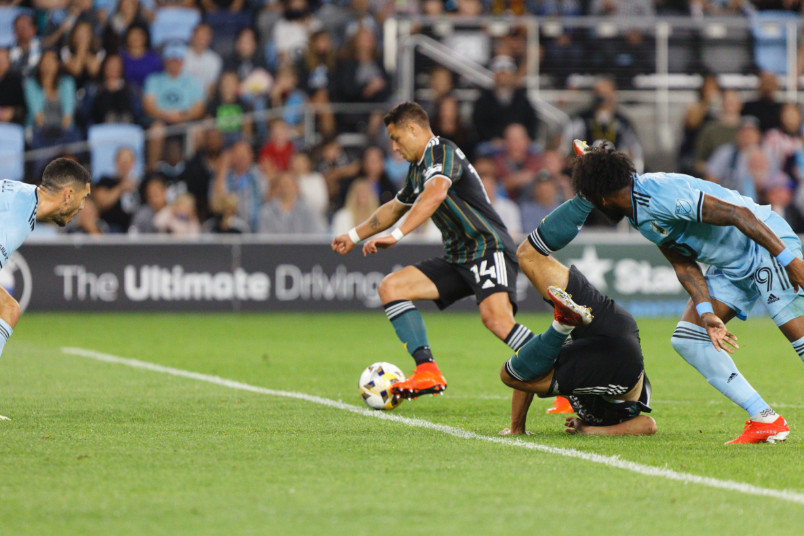 By Luis Bueno – RIVERSIDE, CA (Oct 27, 2021) US Soccer Players – At the start of the 2021 MLS season, the LA Galaxy looked like a team within reach of its old identity. The one where they’re a Western Conference contender from the start of the season, grouped in with the best teams in Major League Soccer. Under new coach Greg Vanney, the club met early expectations. Through 10 games, the Galaxy had seven wins and three losses. That contender status seemed likely. The return to prominence was well under way.

After not winning a game in September and finishing the month on a three-game losing streak, October looks like a turnaround of sorts. It’s worth the reminder that LA carried two losses and a tie into September, eventually going nine games without a win before beating Portland on October 16. A result at Sporting would mean the Galaxy finishes the month undefeated. While it’s easy to look at all of those dropped points, the Galaxy remains in contention for a playoff spot.

LA is currently in 5th-place with three games remaining, tied on points with 4th-place Portland. That may not hold for either of those clubs. Given the state of the Western Conference table, the nine points will represent the difference between the postseason and disappointment. To say it won’t be easy is an understatement. The Galaxy is at 2nd-place Sporting Kansas City on Wednesday night, hosts the 1st-place Sounders on Monday, and finishes at home to 6th-place Minnesota on Decision Day.

They’re in a group of six teams vying for the final four playoff positions in the West. Seattle, Sporting KC, and Colorado have all clinched postseason spots, though the order of finish is now wide open. The rest of the field could remain undecided until Decision Day.

Portland and the Galaxy each have 46 points, while Minnesota has 45. LAFC, fresh off its 3-0 win over Seattle, has 44 but now has one more game played than the rest. Vancouver sits in eighth place on 44 points while Real Salt Lake has 42 but with a game in hand over the others and two with LAFC.

The Galaxy’s schedule will do it no favors, but they’re more than a potential spoiler for the team that finishes in 1st-place. Consistency has been an issue across the conference, with every team in a position to wonder what if when looking back at their schedule.

LA got another one of those games last Saturday. With points at a premium, they drew 2-2 at home with FC Dallas, a team already out of the playoff picture. That required LA putting together a two-goal comeback to get that point. Without it, they’d enter the midweek matchday tied on points with 6th-place Minnesota rather than 4th-place Portland. That’s how close the standings are in real terms, ready to punish teams late in the season.

Perhaps the biggest change from the Galaxy of yore to this current version is games like that. The Galaxy used to win in those scenarios almost at will and would not leave crucial points on the table against weak teams, much less at home. Knowing how to gut out wins was a hallmark of Galaxy teams from roughly 2009 through 2016.

This year’s team has stars – Javier “Chicharito” Hernandez, Jonathan Dos Santos – and veterans who have been with the team for some time – Sebastian Lletget, Daniel Steres – but there are too few of those players. The continuity has just not been there. The advantage play of squad familiarity isn’t what it was, but maybe that will change with Vanney around.

Vanney found great success at Toronto FC, a reclamation project that was unlike the task he took on with the Galaxy. At best, the Galaxy is a reclamation of its former status. Toronto didn’t have that history. Instead, Vanney had to create it as he pushed his vision for the club forward. Three MLS Cup finals and one title in his six-plus seasons at the helm became Vanney’s resume in this league.

Like Toronto FC, the Galaxy has deep pockets and not afraid to pay millions of dollars for players. It’s not just the high-priced talent that will lead the way for the Galaxy. It’s also the rank-and-file, most likely to be the players willing to grind out a result or two. That may already be in progress. LA had to turnover whatever insecurities came with that long winless streak. Self-belief only goes so far when the results aren’t there. Eventually, it takes doing enough to get through. If they figure that out now, the Galaxy can change the scope of this regular season and the Western Conference.