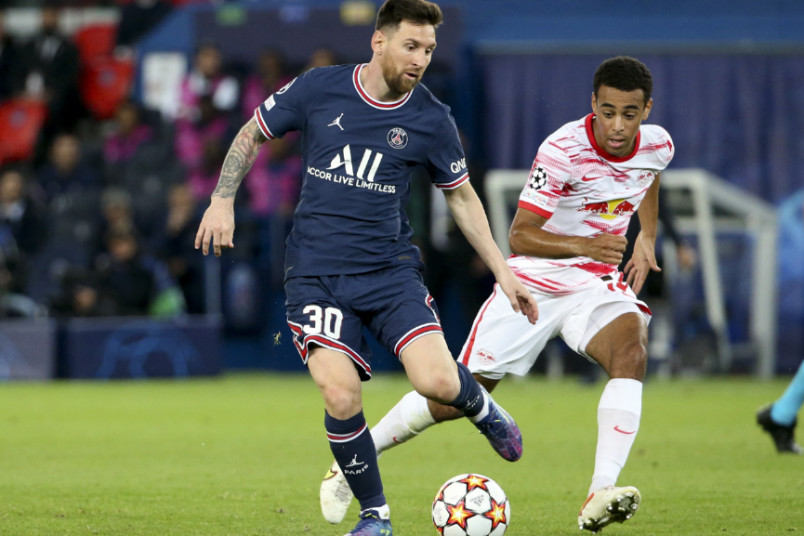 Wednesday’s soccer news starts in the Champions League. Tyler Adams’s RB Leipzig lost 3-2 at PSG in group A. Trailing from the 9th minute, Andre Silva equalized for Leipzig in the 28th and Nordi Mukiele put them ahead in the 57th. PSG equalized in the 67th and converted a 74th minute penalty. Adams saw yellow in the 84th minute. Leipzig is in last place in the group with no points from three games. PSG leads Manchester City 7 to 6 with Club Brugge in 3rd-place on four points.

“We played well and were in control for the majority of the game,” RB Leipzig coach Jesse Marsch said. “After taking the lead, we were in a good position but made a bad mistake. Messi and Mbappe don’t need much time or space to score. There are a lot of positives to take away. We were brave and played well out of possession. We created a lot of chances and were also dangerous at set pieces. However, we’ve got our backs against the wall here, it will be difficult. We need to make fewer mistakes in the upcoming games.”

Zack Steffen was on the bench for Manchester City’s 5-1 win at Club Brugge. Owen Otasowie wasn’t in the squad for Club Brugge. City’s Joao Cancelo opened the scoring in the 30th and Riyah Mahrez converted a penalty in the 43rd. Kyle Walker made it 3-0 in the 53rd and Cole Palmer added a goal in the 67th. Club Brugge’s Hans Vanaken scored in the 81st, but City responded quickly with another Mahrez goal in the 84th minute. Gio Reyna is recovering from injury and missed Borussia Dortmund’s 4-1 loss at Ajax. The scoring started with an 11th minute own-goal and Ajax added goals in the 25th, 57th, and 72nd minutes.

In the Europa League, Cameron Carter-Vickers’s Celtic beat Ferencvaros 2-0 at home. Kyogo Furuhashi opened the scoring in the 57th and an own-goal doubled the lead in the 81st minute. Celtic is in 3rd-place in group G with three points from two games, trailing Bayer Leverkusen and Real Betis tied at the top with six points from two games and playing on Thursday.

“I’m really pleased,” Chelsea manager Ange Postecoglou said. “I thought it was a good performance, a strong performance as they are good team. I thought from the start we didn’t let them get in the game, we controlled it and they had to work awfully hard to try to stifle us in the first 45 minutes. So we knew if we kept at it, we’d get the opportunities. Our players stuck to their task, they were disciplined, and in the end we got a well-deserved victory.”

Moving to the Championship, Ethan Horvath was on the bench for Nottingham Forest’s 2-1 win at Bristol City. Trailing from a 39th minute goal, Forest’s Lyle Taylor scored a minute into stoppage time and converted a penalty a minute later. Lyndeon Gooch wasn’t in the squad for Sunderland’s 4-0 win at Crewe Alexandria in League One. An own-goal opened the scoring in the 25th and Ross Stewart added goals in the 32nd and 55th. Leon Dajaku scored Sunderland’s fourth goal in the 73rd with Ron-Thorben Hofmann keeping the clean sheet. In Spain’s Segunda Division, Shaq Moore was on the bench for Tenerife’s 1-0 home loss to Eibar. The goal came in the 75th minute. Tenerife’s Victor Mollejo saw red in the 86th.

Europa League on Galavision: Lazio vs Marseille at 12:45pm and PSV vs Monaco at 3pm. TUDN has Real Betis vs Bayer Leverkusen at 12:45pm. Napoli vs Legia Warsaw is on UniMas at 3pm. ESPN2 has the US Women vs Korea friendly at 8pm ET.