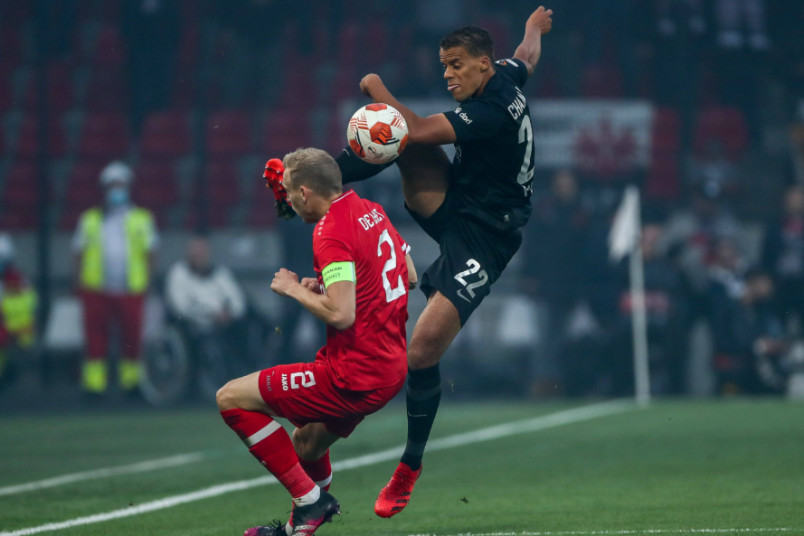 Friday’s soccer news starts in the Europa League where Timothy Chandler’s Eintracht won 1-0 at Royal Antwerp in group D. Goncalo Paciencia converted a penalty a minute into stoppage time for the game’s only goal. Eintracht goalkeeper Kevin Trapp made four saves to keep the clean sheet. Sam Vines wasn’t in the squad for Antwerp.

“It was a very intense game that we deserved to win,” Chandler said. “I am very proud of the team. It’s great that we made it. The fight prevailed. We had a chance of more goals. It was important that we threw ourselves into every duel. Goncalo’s goal shows how important every player is in our squad.”

Konrad de la Fuente subbed on in the 79th minute of Marseille’s 0-0 home draw with DeAndre Yedlin’s Galatasaray in group E. Yedlin subbed on in the 67th minute. Cameron Carter-Vickers’s Celtic lost 4-0 at home to Bayer Leverkusen in group G. The goals came in the 25th, 35th, a 58th minute penalty, and four minutes into stoppage time.

Mark McKenzie was on the bench for KRC Genk in their 3-0 home loss to Dinamo Zagreb in group H. Dinamo scored in the 10th, adding penalties in first-half stoppage time and the 67th minute. Genk’s Daniel Munoz saw red in the 65th minute. Richy Ledezma wasn’t in the squad for PSV’s 4-1 win at Sturm Graz in group B. Ibrahim Sangare scored for PSV in the 32nd and Eran Zahavi doubled the lead in the 51st. Sturm Graz pulled a goal back in the 55th, but PSV added two through Philipp Max (74th) and Yorbe Vertessen (78th). PSV finished a man down when Sangare saw red in the 89th minute.

Bryan Reynolds was on the bench for AS Roma’s 3-0 win at Zorya Luhansk in group C of the Europa Conference League. Stephan El Shaarawy opened the scoring in the 6th. Chris Smalling made it 2-0 Roma in the 66th and Tammy Abraham scored in the 68th minute. Mix Diskerud wasn’t in the squad for Omonia’s 4-1 home loss in group H. Jan Lecjaks gave Omonia the lead in the 40th minute. Qarabag responded with goals in the 52nd, 73rd, a 79th minute penalty, and scoring again four minutes into stoppage time.

MLSsoccer’s Charles Boehm with USMNT coach Gregg Berhalter’s comments about the October roster. The Atlanta Journal-Constitution’s Doug Roberson talks to Carlos Bocanegra about his National Soccer Hall of Fame induction. The Athletic’s Felipe Cardenas and Sam Stejskal work through the issues with the Leagues Cup revamp. Soccer America’s Paul Kennedy on the situation with the NWSL. ESPN’s Derek Rae asks about Jesse Marsch at RB Leipzig.

Saturday has the Premier League on NBCSN” Manchester United vs Everton at 7:30am and Leeds vs Watford at 10am. Chelsea vs Southampton is on USA at 10am. NBC has Brighton vs Arsenal at 12:30pm.

Ligue 1 on beIN Sport: Montpellier vs Strasbourg at 11am and Nice vs Brest at 3pm. Primeira Liga on GolTV: Porto vs Pacos de Ferreira at 1pm and Arouca vs Sporting at 3:30pm.

MLS on UniMas: Austin vs Real Salt Lake at 3:30pm. Liga MX on TUDN: Leon vs Atletico San Luis at 6pm. NBCSN has Chivas vs Atlas at 10pm.

Sunday has the Premier League on NBCSN: Crystal Palace vs Leicester City at 9am and Liverpool vs Manchester City at 11:30am.

Ligue 1 on beIN Sport: Rennes vs PSG at 7am, Monaco vs Bordeaux at 9am, Lille vs Marsellie at 11am, and St Etienne vs Lyon at 2:45pm. Primeira Liga on GolTV: Benfica vs Portimonense at 1pm.

Liga MX on Univision: Toluca vs Queretaro at 1pm and Club America vs UNAM Pumas at 6pm. UniMas has Tigres vs Necaxa at 8pm. Tijuana vs Cruz Azul is on ESPN Deportes at 10pm. MLS on TUDN: Sporting KC vs Houston at 4pm. FS1 has Portland vs Inter Miami at 5:30pm. LA Galaxy vs LAFC is on ESPN at 8pm.