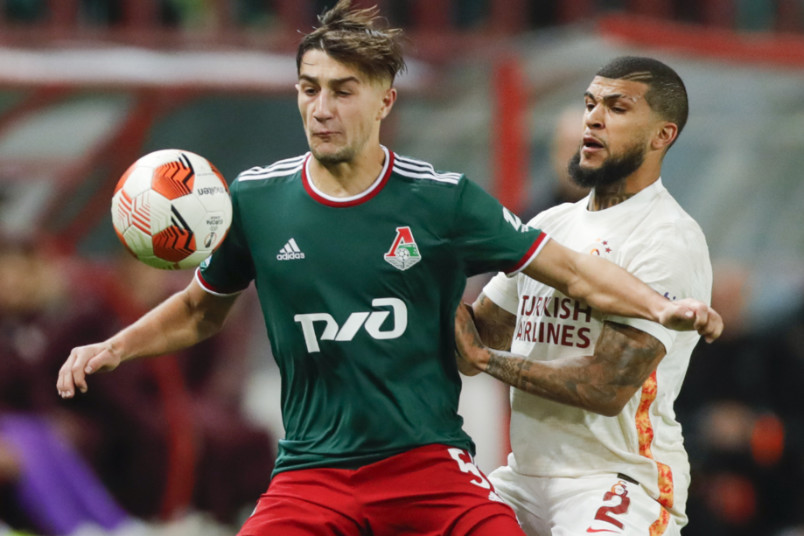 Friday’s soccer news starts in the Europa League. DeAndre Yedlin’s Galatasaray won 1-0 at Lokomotiv Moscow in group E. Kerem Akturkoglu scored in the 82nd minute with Lokomotiv finishing with no shots on goal.

“I always aim for the three points, no matter who we play.” Galatasaray coach Fatih Terim said. “I’m obviously happy with the result but not so much with the performance, especially in the first half. But we’ve shown character and the right mentality, that’s what is really important.”

Sam Vines’sRoyal Antwerp drew 2-2 at Fenerbahce in group D. Mbwana Samatta scored for Antwerp in the 2nd minute. Fenerbahce equalized in the 20th and converted a 45th minute penalty. Antwerp equalized from a Pieter Gerkens goal in the 62nd.

“I am generally happy what my players did on the pitch tonight,” Royal Antwerp coach Brian Priske said. “Statistically, the result might look fair, but I think my players’ performance has deserved a win.”

Konrad De La Fuente was on the bench for Marseille’s 0-0 draw at Lazio in group E. Timmy Chandler wasn’t involved in Eintracht’s 3-1 home win over Olympiacos in group D. Rafael Borre converted a 26th minute penalty for Eintracht. Olympiacos equalized from the penalty spot in the 30th. Eintracht went ahead for good from an Almamy Toure goal two minutes into first-half stoppage time. Daichi Kamada finished off the goals in the 59th minute.

Richy Ledezma wasn’t in the squad for PSV’s 2-1 home loss to Monaco in group B. Trailing from the 19th minute, Cody Gakpo equalized for PSV in the 59th. Monaco scored again in the 89th minute. Mark McKenzie was on the bench for Genk’s 3-0 loss at West Ham in group H. The goals came in first-half stoppage time and the 57th and 58th minutes.

Mix Diskerud subbed out at halftime of Omonia’s 3-1 loss at Basel in the Europa Conference League group H. Down a goal from the 19th, Jordi Gomez equalized for Omonia in the 26th. Basel converted a 41st minute penalty and scored their third goal in the 88th. Bryan Reynolds’s AS Roma lost 6-1 at Bodo/Glimt in group C. Falling behind in the 8th minute, Roma’s Carles Perez equalized in the 28th. Bodo/Glimt added goals in the 20th, 52nd, 71st, 78th, and 80th minutes.

“On an artificial pitch, in weather conditions like these, I decided to rotate a lot of players,” Roma coach Jose Mourinho said. “Then, we lost to a side that was better than us. It’s simple. The Bodo first team is better than the one that started the game for us.”

Saturday has the Premier League on NBCSN: Chelsea vs Norwich City at 7:30am and Leeds vs Wolverhampton at 10am. USA has Everton vs Watford at 10am. Brighton vs Manchester City is on NBC at 12:30pm.

La Liga on ESPN2: Valencia vs Mallorca at 8am. Ligue 1 on beIN Sport: Nantes vs Clermont at 11am and Lille vs Brest at 3pm. Primeira Liga on GolTV: Tondela vs Porto at 1pm and Sporting vs Moreirense at 3:30pm.

MLS on Univision: Seattle vs Sporting Kansas City at 3:30pm and LA Galaxy vs FC Dallas at 10pm. Liga MX on TUDN: Puebla vs Leon at 6pm. Fox Deportes has Monterrey vs Necaxa at 6pm. Club America vs Tigres is on Univision at 8pm. Telemundo has Chivas vs Cruz Azul at 10pm.

Sunday has the Premier League on NBCSN: West Ham vs Spurs at 9am and Manchester United vs Liverpool at 11:30am.

Ligue 1 on beIN Sport: Nice vs Lyon at 7am, Reims vs Troyes at 9am, Monaco vs Montpellier at 11am, and Marseille vs PSG at 2:30pm. Primeira Liga on GolTV: Vizela vs Benfica at 1pm.

Liga MX on Univision: UNAM Pumas vs Tijuana at 1pm. Santos Laguna vs Toluca is on FS2 at 8pm. TUDN has San Luis vs Atlas at 8pm and Pachuca vs Juarez at 10pm. MLS on ESPN: Austin vs Houston at 5pm. FS1 has Orlando City vs New England at 7:30pm.

Monday has the Super Lig on beIN Sport: Besiktas vs Galatasaray at 1pm. All Times Eastern