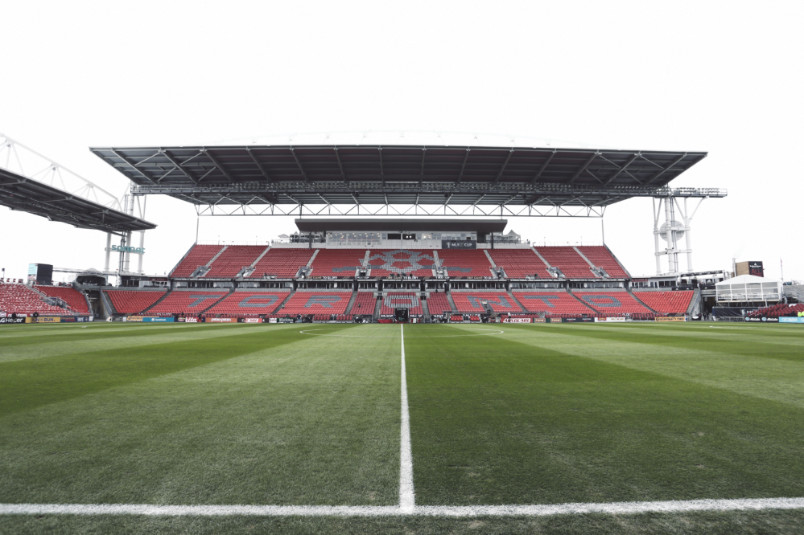 By Charles Boehm – WASHINGTON, DC (Nov 25, 2021) US Soccer Players – While most of the United States gears down for one of the country’s major holidays, it’s a full work week across Lake Ontario at Toronto FC, and a busy one at that. The Reds concluded their 2021 campaign with a 1-0 loss to CF Montreal in Sunday’s Canadian Championship final, following a second-from-bottom finish in the MLS Eastern Conference table.

On Monday they parted company with general manager and senior vice-president of soccer operations Ali Curtis and confirmed that interim head coach Javier Perez was also moving on. On Tuesday, Bob Bradley was introduced as TFC’s new head coach and sporting director, ending his exceedingly brief phase of unemployment after departing LAFC on November 18. The Canadian club appears to have ended a cycle, and must now set the terms of a new one.

“I don’t want to use the word ‘rebuild’ because a rebuild is a three- or four-year process,” club president Bill Manning told reporters at Tuesday’s unveiling. “I think this will be a bit of a transition here as Bob has the opportunity to make over this roster. We are going to look to make some pretty significant changes to upgrade our talent, and to put together a roster that can play good football and winning football. So, look, I don’t think it’s going to be just minor tweaks. I think we’re going to try to be bold and what we can do to remake this team.”

Even in the franchise environment of MLS, local terroir matters and TFC are on a short list of “big clubs” that cast a shadow both in their city and beyond. That’s meant both big success and big troubles in recent years. The same core group that achieved an historic 2017 treble, advanced to three MLS Cup finals in four years, and came closer to winning the Concacaf Champions League than any other MLS club in history has also missed out on the playoffs twice in the past four seasons.

Toronto has mainstays aging, more than one star player is unsettled, and an academy-driven youth movement in need of guidance. As with Montreal and Vancouver, the pandemic has inflicted a heavy headwind on their past two seasons, mainly via long months based in exile in the United States. Separated from his family for long chunks of his stint at TFC, Curtis felt it just as much as the players and technical staff and will reportedly rejoin MLS headquarters to take a role in its new lower-division league.

The Reds’ 2021 began with the arrival of Curtis’s former New York Red Bulls colleague Chris Armas as their new head coach. That ended on July 4, with Perez taking the job on an interim basis. Now Bradley encounters a very different kind of challenge than the build-from-scratch LAFC project he just bid farewell to.

“I think there’s a lot of work to be done,” the globetrotting Bradley said when asked about his initial evaluations on Tuesday. “This is not an empty whiteboard. This is a whiteboard that still has a lot of names and requires a lot of discussion.”

Widespread reports state that two of TFC’s Designated Players, Jozy Altidore and Yeferson Soteldo, could leave this winter. Richie Laryea and Jonathan Osorio, both regular starters, local products and Canadian internationals, were open about their interest in moving to Europe when speaking to media on Tuesday. Manning pointed specifically to a leaky defense and locker-room chemistry issues as areas in pressing need of drastic improvement.

“I don’t think we had a culture this year. I think we’ve lost this amazing culture that we had built up over the years here,” he said. “We not only got a black eye, we got two black eyes when COVID hit. It was really difficult on this club and going through a transition like we did with a coaching change, some of the culture that was built here evaporated very quickly, and the introduction of some players into the club and some of the guys that were here, it wasn’t seamless. So culture is a buzzword, but it’s also real.”

It’s both good fortune and a fitting narrative for TFC that Bradley became available to rejoin his son Michael for the first time since their time together with the USMNT from 2006-11, a span that included the delirious highs of the 2009 Confederations Cup and 2010 World Cup runs. It’s also a reunion with his brother Jeff, who heads the club’s communications department.

“I didn’t know if I’d have the chance to coach Michael again,” said Bradley. “He and I have shared incredible moments in the game. And those moments came when I coached him, but then they’ve come when we’ve been far apart, watching his games, talking to him.”

Bob said he’s watched every TFC match since Michael’s arrival in 2014, some of them twice. That portends a more advanced starting point for his process than just about any new arrival the club could have hoped for. It’s timely for both parties that the new boss is ready to take on the additional power and responsibility of a director’s role, on a trajectory not unlike his former coworker Bruce Arena’s.

“We spent about three and a half hours together, and things came together very quickly after that,” said Manning of his talks with Bradley. “I think he is the right guy at the right time to lead this club.”

Bradley will need every bit of his incumbent familiarity with the Reds. There’s limited time in which to make headway on all that work. TFC’s preseason opens on January 19, just 54 days after his introduction.