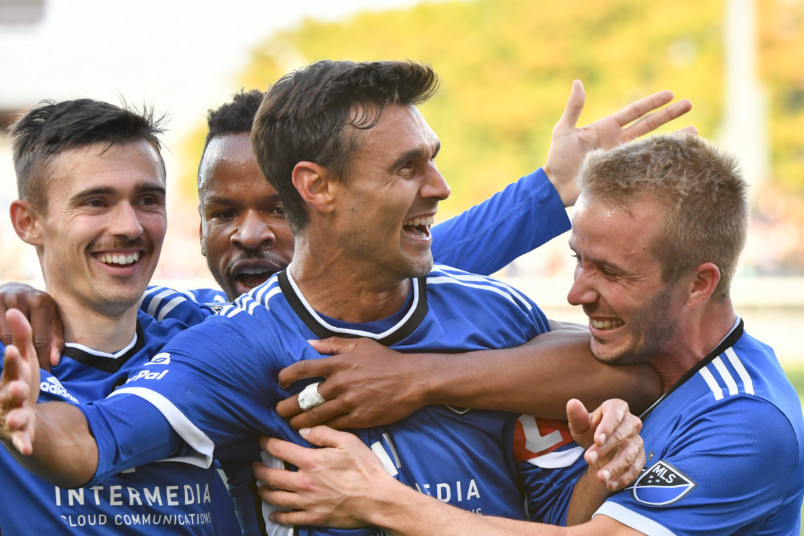 By Charles Boehm – WASHINGTON, DC (Nov 12, 2021) US Soccer Players – When Chris Wondolowski officially made his retirement official this week, it ended an incredible 17-year professional career as the runaway leader atop the all-time MLS scoring chart. While every player’s retirement is fraught with emotion and reflection, his is a story the likes of which we may not see again for a long time, if ever.

Wondolowski rose from NCAA Division II program Chico State to MLS via the fourth round of the 2005 MLS Supplemental Draft, a bygone mechanism of a league now scarcely recognizable from those days. Including the SuperDraft that preceded it, MLS clubs picked 88 college prospects ahead of Wondolowski that year before the San Jose Earthquakes finally took a flyer on a local kid.

Even after catching on as a pro, Wondolowski spent most of his time on the bench for five seasons. He started just 19 league games in that span, often throwing everything he had into the reserve league matches that otherwise tended to be sleepy affairs. Then somehow, everything clicked in 2010. He reeled off 18 goals to win the MLS Golden Boot, the first of an unreal ten consecutive years of double-digit scoring. In Tuesday’s press conference, he said that unparalleled level of consistency and longevity “means even a little bit more” to him than his career total.

It added up to 171 regular-season goals and 42 assists in 413 appearances. Even with his heyday not starting until he was 27, he stacked up five All-Star nods, three Best XI honors, and the 2012 league MVP trophy, a season in which he also led the Quakes to the Supporters’ Shield. At international level, it earned him 35 USMNT caps, scoring 11 times, and roles on the 2014 World Cup and 2016 Copa America Centenario squads.

“[I’m] still, emotionally, getting wrapped around it. I think it’s really going to hit me when preseason starts and guys go back,” Wondolowski said. “I always knew retirement was there. There was always that elephant in the room. It was something that was on my mind, even throughout last year. I always wondered and tried to make sure I could fit in and help the team in any way possible. I think it was just coming to that realization that this is a great time. It’s clean cut. I think that I gave everything I could and that was it – it was time to have this opportunity to move on. I am very lucky.”

As inspiring as his underdog journey has been, as dazzling as his statistics are, one smaller number catches the eye for the wrong reasons. Wondolowski played in just seven playoff games over his entire career.

That’s a sobering indictment of his club. Even allowing for their rough rebirth in 2008 as a de facto expansion team, and the drawn-out pursuit of their own stadium that finally concluded with PayPal Park’s 2015 debut, the Quakes drastically underachieved for much of the Wondo years.

As many goals and memorable moments as he gave the club and its fans, the most efficient, instinctive finisher in modern American soccer history never really got close to winning an MLS Cup with his hometown team. That he earned championship rings as a Houston Dynamo reserve in his second and third MLS seasons may well be both consolation and a painful reminder of what was missing in San Jose.

That’s what makes his next step so significant. The Earthquakes have created a new job just for Wondolowski, naming him the special assistant to new general manager and former teammate Chris Leitch. He’s immediately transitioning into this role, which sounds like it will carry both hands-on and big-picture elements towards elevating an organization rich in unfulfilled potential.

“In this role, he will work in a number of different areas, including spending time working with the academy players and our young pros on our first team, advising me in a number of different areas as well, as we’ve discussed here the last couple of days. And he’ll obviously spend some time in the community,” said Leitch. “He has 17 years of experience, so we’re going to learn from that knowledge and we’re really happy that he’s going to continue with this organization, and continue to make a positive impact with our club.”

Ensuring that Wondolowski sticks around strengthens the Quakes as an institution. It also hints at a higher ceiling for their promising crops of young talent.

“That’s something that I really want to help with, and kind of be that bridge, that middleman between the locker room and the front office and be able to understand where they’re coming from and where the locker room’s heart or mind is at a given time,” said Wondolowski on Tuesday.

“I think that’s something I really have found interest in, and I think that I can be valuable in identifying and helping, especially with the young individuals on the first team or even academy … I think Cade Cowell is on an amazing path and I can’t wait to continue to work with him, but we have a lot of great young individuals that haven’t quite gotten the same minutes as Cade. Even Benji Kikanovic, Gilbert [Fuentes], Jacob [Akanyirige], or Casey [Walls] who just got called into the United State U-20s.”

For all he’s achieved, Wondolowski remains strikingly humble, a grounded human being who repeatedly thanked the organization for keeping him around. That, however, is not just the bare minimum for the Quakes, but an absolute necessity. They owe Wondolowski the staffer a chance to address the shortcomings that so hampered Wondolowski as a player and make his retirement the start of something, not just the end.

“I’m looking forward to what the future holds, especially with this club,” he said. “I love the decisions and the idea of where the future is going. That’s something that excites me and why I still want to be a part of this club, and it’s a part of me.”