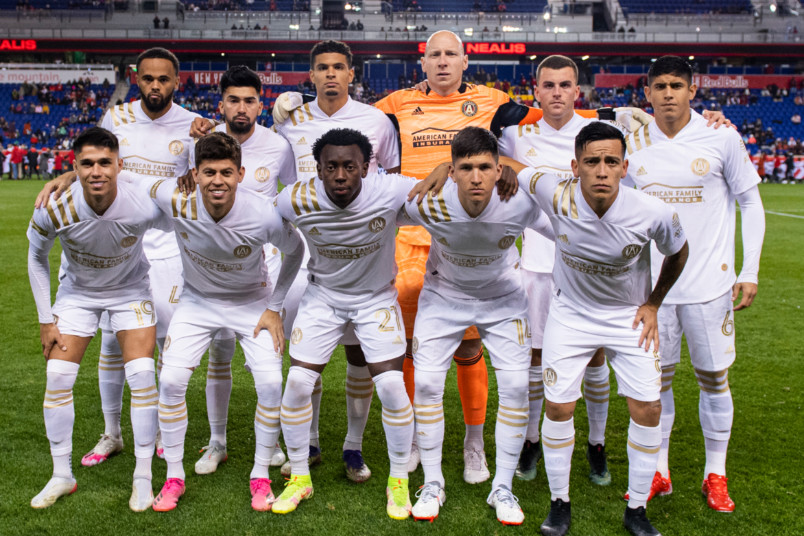 By Jason Davis – WASHINGTON, DC (Nov 5, 2021) US Soccer Players – Like any league, there’s only so much MLS can do about making every matchday count for every team. Part of that is the reality of a playoff league. The 34-game regular season can occasionally feel like low stakes. Normally, there’s always time for a team to bail itself out. Short of a radical rethink of the model, something we already know won’t happen next season, this is the reality. Games in July will continue to feel less important than games in October.

The real drama doesn’t come until the final few weeks of the campaign. The closer the league gets to Decision Day, the more there’s hope for something to play for. A full schedule of games with meaning is the league’s ideal scenario for the last day of the season, as impossible as it might be. It’s right there in the branding: Decision Day.

2021 won’t give MLS everything it wants, but there’s enough left to play for to make this one of the more interesting final days in recent memory. The league even lucked out with the lone team not playing on Decision Day, as the Houston Dynamo proved to be also-rans this season.

This is what’s at stake on Sunday: three unclaimed playoff spots in each conference, with six teams still alive in the East and five teams playing for the trio of positions in the West. Wednesday night’s round of games could have cut the open spots to two for both the Eastern and Western Conferences. Instead, the lack of a winner between New York and Atlanta and Real Salt Lake’s loss to Portland preserves some extra intrigue for the final day.

With Game 34 looming, let’s take a look at four teams who have spots in the postseason on the line—two East and two West—and the journeys they’ve taken to arrive at the decisive 90 minutes of soccer.

We start with Atlanta United, a club that will book its spot in the postseason with a win or draw against FC Cincinnati. The Five Stripes might be frustrated with the way events played out at Red Bulls Arena on Wednesday night, but in light of failing to claim a spot in the penultimate match of the campaign, facing FC Cincinnati is a best-case scenario.

FC Cincinnati is not just bad, it’s historically bad. The third-year franchise has a single win at home in 2021, outscored in its own building 27-16. FCC is on an 11-game losing streak, operating under an interim coach while new general manager Chris Albright takes stock of the challenge he faces.

Atlanta has no excuses. The once struggling club has a chance to control their fate and make the playoffs represents a triumph. The club remade itself as a contender late in the season, putting together eight wins in August and September. Now, the playoff scenario creates an expectation. They need to qualify, then the lofty hopes for this team return.

Down the table in the Eastern Conference is a club that will need to win and have other results to go its way to get in. DC United’s season is a study in measured expectations and the path back to relevance. The club gave new head coach Hernan Losada a chance to grow into his new job, getting everything he could out of a limited roster with a high-pressing style of play.

The Black and Red need to beat already-eliminated Toronto FC at BMO Field on Sunday to have a chance. DC also needs the Red Bulls to lose versus Nashville and Montreal to not win versus Orlando to claim a spot.

Not making the playoffs would be a mild disappointment in DC, but it wouldn’t undercut the progress made by Losada for most fans. Regardless of how the final day goes, DC is in building mode. That should mean spending in the offseason to add to Losada’s high-pressing style.

There are two teams in the West with clear requirements facing them on Sunday. Win and book a spot in the playoffs. One can still get in even with a loss if other results go their way, but that might take some of the joy out of reaching the postseason and undercut the step forward it took in 2021.

That club is the LA Galaxy. In Greg Vanney’s first season in charge, the Galaxy regained some of the swagger that marked the franchise during the heyday of Beckham, Donovan, Keane, and company. It’s Chicharito Hernandez pushing the club forward with 15 goals in 20 games played.

New signings and a clear identity pushed the Galaxy back into the Western Conference conversation. A late-season swoon pulled the club back into the morass of teams fighting for the final few playoff spots. On Sunday, the Galaxy will make the postseason field with a win over Minnesota United in Carson. The game has all the makings of a tipping point.

Real Salt Lake’s next tipping point as an organization probably won’t come on Sunday. That’s with a chance to make the playoffs hanging on a win at Sporting Kansas City. Making the playoffs would validate the work of interim head coach Pablo Mastroeni. It would also bring some good feelings to a club waiting on a change in investor/operator.

RSL missed its chance to book a playoff spot with a loss on Wednesday at home to Portland. Decision Day isn’t a referendum on Mastroeni or the team he inherited. It’s only a chance to prevail over incredibly difficult circumstances and become one of the best stories of the postseason.

Not every game matters on Decision Day, but enough do. On the 34th and final matchday of the season, MLS will get what it always hopes for: pressure, stakes, and most importantly, drama.