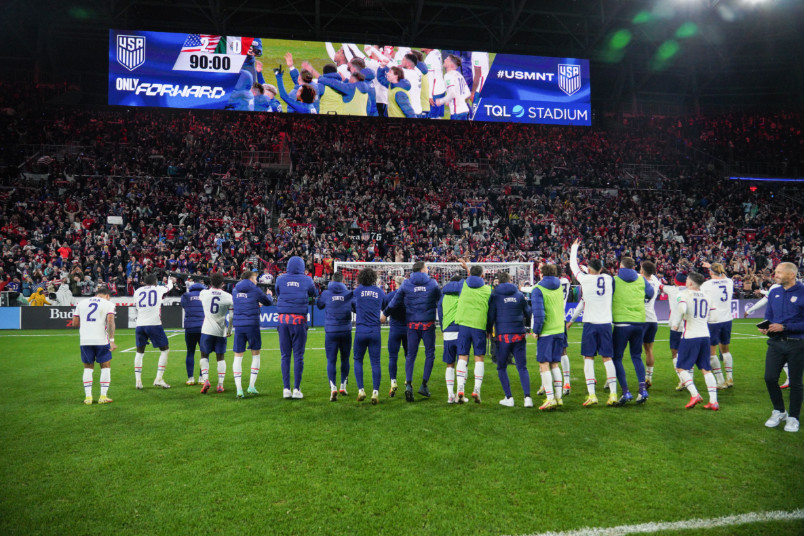 By Charles Boehm – WASHINGTON, DC (Nov 18, 2021) US Soccer Players – After eight matches per team crammed into three hectic international windows, the Concacaf Octagonal World Cup qualifying race entered its back half this week. The pandemic-condensed schedule has changed the scope of qualifying for players and fans. It’s been a fascinating ride so far, with the peak drama still to come over the final six matchdays. Here are four burning questions as the region’s road to Qatar approaches the home stretch.

Can anyone in the trailing pack catch the front-runners?

When the confederation shifted from the six-team Hexagonal round of old to eight finalists for this repeatedly-disrupted 2022 cycle, no one was sure whether or how the dynamics would change. At this point, we can clearly see a top-half/bottom-half phenomenon.

Undefeated Canada leads the group on 16 points, churning ahead at a two-points-per-game clip, with the United States just behind at 15 points. Mexico and Panama are level in 3rd-place one point back of the Yanks, with El Tri owning the goal-difference tiebreaker. If the competition ended tomorrow, that would be who advances, with the three automatic slots going to the continent’s three largest countries and Panama destined for an intercontinental playoff.

From there, it’s a steep drop to 5th-place, currently held by Costa Rica on nine points, followed by Jamaica in 6th, El Salvador in 7th, and winless Honduras bringing up the rear on just three points. Every team has a maximum of 18 points still within their reach, yet it’s hard not to wonder if that gap is already too broad for the stragglers to close.

The Reggae Boyz have been inconsistent and prone to conceding goals at untimely moments. The Salvadorenos’ tenacity has been commendable, albeit betrayed by their meager scoring, with an Ocho-worst four goals so far. And just about everything that could go wrong has gone wrong for Los Catrachos.

Long one of the region’s chronic overachievers, Costa Rica looks the most out of place at present. While the aging Ticos have the pedigree to mount a late charge, they have frittered away any room for error whatsoever. If they maintain their current 1.1 PPG pace, they’d have just 15 or 16 points or so by the end of qualifying. That would pretty clearly not get them anywhere near the playoff place.

The January-February window looms particularly large for them and their most realistic target, Panama. The two sides will face off in San Jose on January 26, a must-win for Los Ticos, who visit Mexico and then Jamaica to close out the window. Meanwhile, Los Canaleros can look forward to home dates with Jamaica and Honduras that look like good opportunities for full points, balanced against visits to Mexico and the US still to come.

Why didn’t Concacaf adopt this format years ago?

Maybe it’s too easy to say in hindsight, especially since the current qualifying format won’t happen again. Still, this more inclusive approach to the final round of qualifying feels like a big upgrade on the Hexagonal. Of the three participants who had to earn their Ocho place via the marathon of the first two rounds, Canada and Panama have shown they belong and then some. That’s perhaps due to the extra games just to get here.

Les Rouges have been a fearsome newcomer, taking points home from their trips to Mexico and the United States. They turned Edmonton of all places into a new Concacaf fortress, beating Costa Rica and El Tri in November.

Panama has extended their often-overlooked Central American Cinderella story, hanging tough against far larger nations with a sturdy defensive shape and rugged physicality across the pitch. El Salvador is the third qualifier. While their odds for Qatar look long, they certainly haven’t looked out of place.

The Octagonal offers the same sort of long, arduous, multi-seasonal path and balanced home-and-home slate as the Hexagonal, with a bigger and more diverse field. We’re watching an upgrade on what we thought we knew about the final round of Concacaf World Cup qualifying.

Has anything really changed for the USMNT?

Every team in the Octagonal carries the baseline objective of reaching the 2022 World Cup. For the US, that’s only part of the context.

Gregg Berhalter has often spoken of his program’s desire to “change the way the world views American soccer” in the wake of the last cycle’s disappointment. There are moments when that ambitious mission statement feels quite attainable, even likely. Last week’s assertive win over Mexico in Cincinnati was one.

The young team returned to earth a bit with the 1-1 draw at Jamaica. It was an unsatisfying outcome in many ways. Berhalter was honest enough to admit that it was one they were happy to fly home with, especially given the Reggae Boyz’ disallowed goal and other close looks in the second-half. It sent the US into the winter in a much better place than this time in the 2018 cycle. Back then, they were only in 3rd-place even after a home win over Trinidad & Tobago and a brave draw against Mexico at the Azteca.

“We’re not looking at it as a disappointing result, we’re looking at it as a good result,” the coach said following the draw with Jamaica. “Any time you get a point away from home is a good thing in Concacaf qualifying, and I want to be very clear by saying that. I think for the guys to have their heads down because we wanted more is completely natural, but this is a point that we’ll absolutely take on the road.”

Those words only further infuriate a perfectionist subset of the fan base that sees performances like last week’s as expected and normal rather than a high-water mark of the past several years. Are they right to have such sky-high expectations? Tim Weah asked for patience and positivity post-game.

“I felt like we could have done more in the game but when you come to these hot countries, fatigue does play a part, playing these games so close to each other,” said the young winger. “That played a huge part to the conditions and all that stuff. But we really have to forget about all that stuff, and take the positives away from the game as we take the negatives, and just continue on this positive note that we have. Obviously the fans want us to win, we want to win as well, but the ball’s round, you know? Things happen. We just have to continue doing what we’re doing. I think we’re on a great path right now.”

Will Mexico hold its nerve?

Perhaps no one had a more demanding November window than Mexico. El Tri entered the month undefeated and led the Ocho before losing to the United States and Canada. That means pressure across the program.

“It is not a question of losing three games [in 2021] against the United States… it is not a personal confrontation against the United States,” Mexico coach Tata Martino said after the loss in Cincinatti. “I understand the importance of this being a clasico, having three defeats against a rival that all Mexicans want to beat. But what we have to worry about the most is getting back on track in qualifying.”

Martino has usually been quick to remind everyone that his job is about delivering the elusive “quinto partido,” the fifth game in a World Cup that their long sequence of round-of-16 exits has turned into a national obsession. El Tri is more than likely to book yet another successful qualification in the months ahead. From there, it’s a different level of pressure. Just like for the rest of the Concacaf teams advancing to next November’s World Cup.