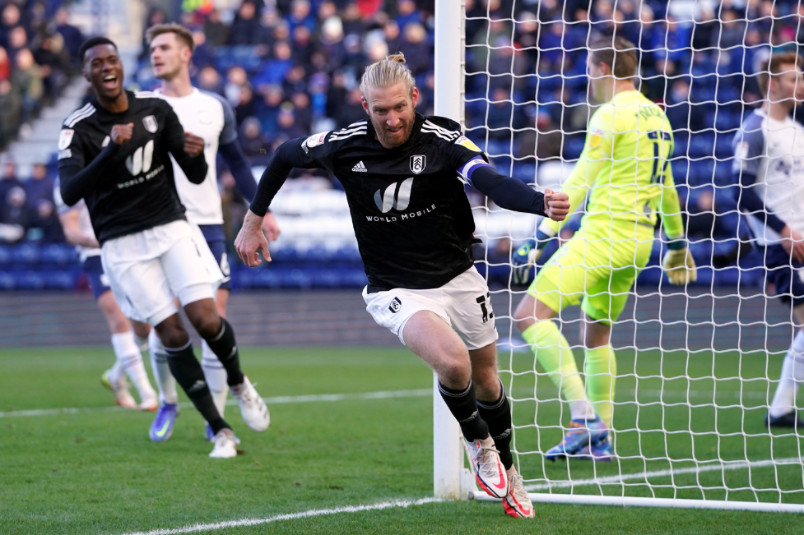 The roundup of USMNT players in Europe and Brazil starts in England’s Championship. Tim Ream and Antonee Robinson’s Fulham drew 1-1 at Preston North End in the Championship. Ream put Fulham up in the 15th minute and PNE equalized in the 72nd. Robinson saw yellow in the 48th.

Duane Holmes subbed out in the 60th minute of Huddersfield Town’s 2-1 home loss to Middlesbrough. With Huddersfield trailing from goals in the 16th and 23rd, an own-goal made it 2-1 three minutes into stoppage time.

Christian Pulisic subbed on in the 78th minute of Chelsea’s 1-1 home draw with Manchester United in the Premier League. Down a goal from the 50th minute, Chelsea’s Jorginho converted a penalty in the 69th. Josh Sargent subbed out in the 68th minute of Norwich City’s 0-0 home draw with Wolverhampton.

Tyler Adams subbed on in the 73rd minute of RB Leipzig’s 3-1 home loss to Bayer Leverkusen in the Bundesliga. Down 2-0 from goals in the 21st and 34th minutes, Andre Silva scored for Leipzig in the 62nd. Leverkusen scored again in the 64th minute.

“We definitely missed the fans tonight, that was obvious,” RB Leipzig assistant coach Achim Beierlorzer said. “It’s weird to have to play in an empty stadium. We will work hard to become more consistent, that’s something we work towards every day with the lads. It’s our task to guide the team to victory even in important games such as this.”

Chris Richards subbed on in the 63rd minute of Hoffenheim’s 6-3 win at Furth. Trailing from a 22nd minute Jamie Leweling goal, Ihlas Bebou equalized for Hoffenheim in the 32nd with Georgino Rutter doubling the lead in the 40th. Timothy Tillman equalized for Furth in the 46th. Rutter scored again for Hoffenheim in the 40th. Bebou got his second in the 62nd, and an own-goal made it 5-2 in the 66th. Branimir Hrgota pulled a goal back for Furth in the 67th. Bebou finished off his hat-trick in the 80th minute.

Andrew Wooten subbed out in the 57th minute of Osnabruck’s 1-0 home loss to Freiburg II in the 3.Liga. Freiburg II scored in the 33rd minute. Terrence Boyd’s Hallescher lost 2-0 at Viktoria Koln to goals in the 2nd and 20th minutes. Hallescher played a man down from the 87th.

Weston McKennie subbed out with an ankle injury in the 64th minute of Juventus’s 1-0 home loss to Atalanta in Serie A, giving up a goal in the 28th. Gianluca Busio started and Tanner Tessman subbed on in the 71st minute of Venezia’s 2-0 home loss to Inter Milan. The goals came in the 34th and from a penalty six minutes into stoppage time.

Konrad De La Fuente subbed out in the 69th minute of Marseille’s 1-0 home win over Troyes in Ligue 1. Pol Lirola scored in the 74th minute. Tim Weah subbed on in the 76th minute of Lille’s 1-1 home draw with Nantes. Burak Yilmaz scored for Lillte in the 9th with Nantes equalizing in the 24th. Lille played a man up from the 78th minute. Nicholas Gioacchini subbed out in the 56th minute of Montpellier’s 1-0 home loss to Lyon. The goal came in the 17th minute.

Cameron Carter-Vickers’s Celtic beat Christian Ramirez’s Aberdeen 2-1 at home in the Scottish Premiership. Jota put Celtic up in the 20th with Lewis Ferguson converting an Aberdeen penalty in the 33rd. Celtic’s Callum McGregor scored in the 60th.

Tyler Boyd subbed out in the 73rd minute of Rizespor’s 1-0 home win over Kayserispor in the Super Lig. Selim Ay scored the game’s only goal in the 48th minute. DeAndre Yedlin’s Galatasaray drew 0-0 at Yeni Malatyaspor.

Brenden Aaronson subbed out in the 61st minute of Red Bull Salzburg’s 2-1 loss at Austria Klagenfurt in the Austrian Bundesliga. Trailing from goals in the 30th and 80th, Rasmus Kristensen scored for Red Bull a minute into stoppage time. A league down, Ulysses Llanez scored in St Polten’s 1-0 win at Rapid Vienna II. Llanez’s goal came in the 86th minute.

Johnny Cardoso subbed out at halftime for Internacional in their 1-1 draw with Santos in Brazil’s Serie A. An own-goal put Internacional up in first-half stoppage time. Santos equalized in the 47th. Cardoso saw yellow in the 36th minute.