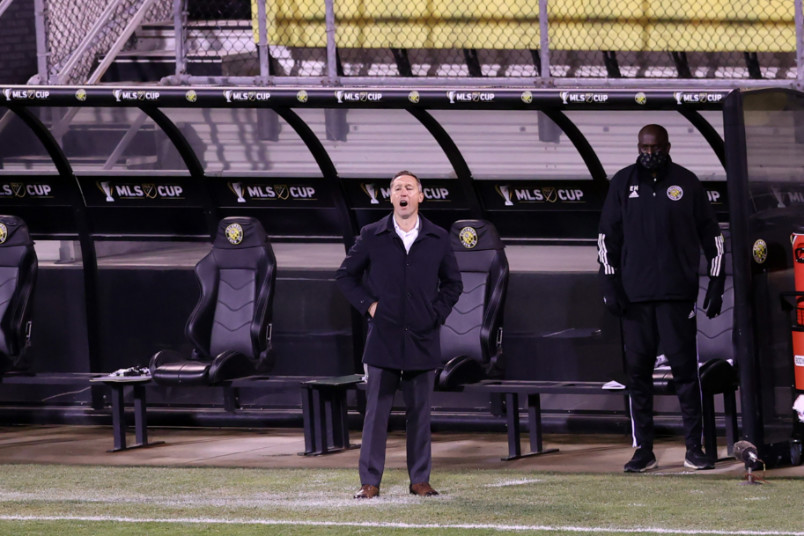 By Clemente Lisi – NEW YORK, NY (Nov 1, 2021) US Soccer Players – Coaches don’t play the game, but in the best cases, they’re its architect. They’re hired, fired, feted, and maligned depending on the fortunes of their teams. In MLS, parity makes quick turnarounds possible. It also puts additional pressure on coaches to deliver over short time frames in a league with significant financial controls. Then there are the coaches that seem to have this league figured out.

The legendary Bruce Arena of the New England Revolution, for example, could win another MLS title after putting together two dynasties with DC United in the mid-90s and the Los Angeles Galaxy in the 2010s. Two current MLS coaches, Greg Vanney and Caleb Porter, reached the 100-win club this season, while Jim Curtin fell short this fall but will certainly hit the mark in 2022. It’s a story about how longevity and solid tactics can lead to personal and team success.

This is an exclusive club if you consider that just 10 coaches have reached the century mark when it comes to league victories over the past 26 years. The three newest members of that club represent a new generation of MLS coaches who emerged at the same time as the sport found mainstream popularity. In the case of Vanney and Porter, both reached where they currently are by taking different roads, proof of the many possibilities available in the modern US game.

Vanney, a former MLS standout and assistant coach at Chivas USA, found success as head coach at Toronto FC before moving to the LA Galaxy this season. Porter, meanwhile, had a short MLS playing career but became a standout coach at the college level before coming to MLS, first with the Portland Timbers and eventually the Columbus Crew.

The two coaches reached the 100-win plateau in starkly different seasons. The Crew, defending MLS champions, had a relatively mediocre season but can still make the playoffs. The Galaxy has largely been a .500 team with a better shot at making the postseason.

“If it was the one that clinched the playoffs, and got us into the next phase of things, I’d be happier,” Vanney told reporters following a 3-0 win against the Houston Dynamo on October 20 to reach the milestone. “We’re still grinding away at that and we’re going to keep building. Hopefully 101 or 102 will be the one that seals the deal for us in the playoffs.”

Vanney, 47, needed seven and a half seasons to get to 100 wins. He won MLS Cup with Toronto FC in 2017, part of a historic treble that also saw the team capture the Supporters’ Shield that season. No surprise, Vanney also won the MLS Coach of the Year award that season.

“This profession is about a journey, and in this journey, we have different experiences,” Vanney said when he left Toronto FC at the end of last season. “I’ve taken every ounce of what I can from this experience and I think it’s time for myself and my family to move on.”

Leading Akron to the 2010 NCAA Championship and developing a group of standout players, Porter, 46, made the move to MLS in 2013. That first season his team won the Western Conference title, and Porter won Coach of the Year. By 2015, the Timbers were MLS Cup champions. Taking the 2018 season off, Porter, 46, returned to MLS with Columbus and a season later led the Crew to the 2020 MLS Cup.

The tactical approaches from Vanney and Porter are different. Vanney has primarily used a 4-4-2 or 3-5-2 with Toronto and a 4-2-3-1 with the Galaxy. With both squads, Vanney likes his midfielders to push up in a more advanced position whenever they gain possession. He is an advocate of attacking soccer, but he’s also pragmatic. Vanney’s players have lauded him for changing tactics based on the opponent and in-game decisions in relation to injuries or the score.

Porter relies heavily on a passing game in a 4-2-3-1 setup once he took over at Columbus. He used a similar style in Portland, but it often resembled a 4-3-3.

“I’ve been very fortunate to be with two excellent clubs with very good players, and I’m proud of the fact that I won a trophy at both of those clubs, but I do this for the players,” Porter told his club’s official site. “It’s all about them. I’m a good coach with good players and a bad coach with bad players.”

Xs and Os aside, Porter said he has the players to thank for helping him reach the century mark on October 16 following a 4-0 victory against Inter Miami.

“One hundred wins and all that and guess what, I don’t win anything without good players and a good staff,” Porter said. “It’s that simple.”