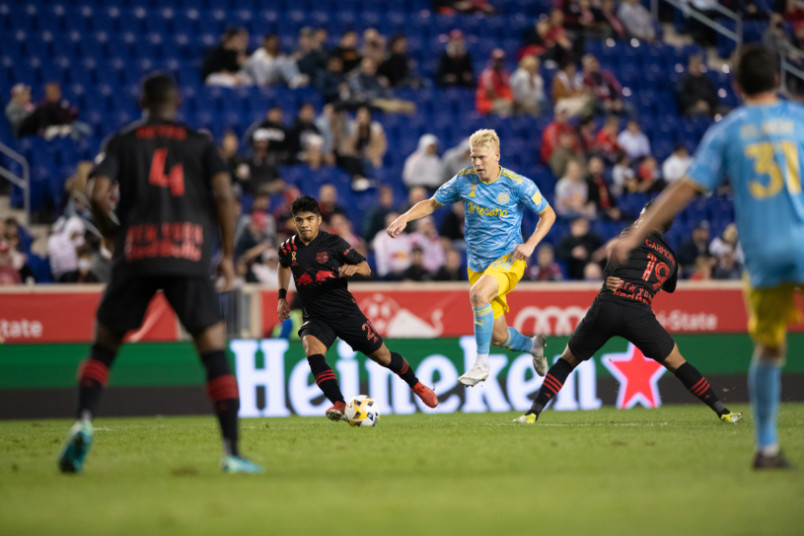 By Jason Davis – WASHINGTON, DC (Nov 19, 2021) US Soccer Players – The wait for the playoffs ends on Saturday with two first-round games, one in the Eastern Conference and one in the Western Conference. Each will pit a top-three seed against a team that needed a run of good results at the tail end of the regular season just to sneak into the playoff field. There’s ambition and expectation on one side and a sense of “anything is possible” on the other.

The two matches also have something else, something surprising, in common. In each case, the head coach of the visiting team has guaranteed a victory. The contexts differ, but the substance is essentially the same. Believing that form matters and that an “us versus the world” mentality can carry the day in a one-off match with advancement on the line, a pair of coaches with little to lose threw down the gauntlet.

Vancouver Whitecaps interim manager Vanni Sartini was the first to promise a win over his club’s first-round playoff opponent. Following a Decision Day draw against the Seattle Sounders at BC Place, an exuberant Sartini let fly with a dose of the over-the-top positivity he’s become known for in British Columbia.

“No, we’ll beat Sporting Kansas City – it’s different,” Sartini said on the post-game video conference when the Whitecaps’ communications director set up the playoff match-up. “If you were at the stadium today you would be confident, if you watched this team play the last 10 games, you would be confident because every stat says we are one of the best teams in the last 15-20 games,” he said following the direct prediction. “So, I would be wrong if I wouldn’t be confident.”

Vancouver has the tools necessary to beat Sporting, chief among them Scottish attacker Ryan Gauld. Since arriving in Canada, Gauld is among the league’s best for expected goals and assists per 90 minutes. It was Gauld’s goal on Decision Day against the rival Sounders that ensured the Caps would get a chance to play for an MLS Cup.

Gauld’s good work was a boon to striker Brian White, another one of Vancouver’s mid-season additions. White’s 12 goals led the Whitecaps and set a new career-high for a player who never found his footing in the Red Bull system. The connection of White and Gauld fundamentally changed the direction of Vancouver’s season. Though it couldn’t save Marc Dos Santos’s job, it allowed Sartini to navigate the team to an unlikely playoff spot.

Make no mistake, Sporting is the favorite on Saturday. Throughout the 2021 season, SKC was a scoring powerhouse. Only New England scored more goals in 34 games than Sporting, and Children’s Mercy Park gives the home team a decided advantage.

But this is the MLS playoffs. Upsets are par for the course. It wouldn’t be shocking if the red hot Whitecaps showed up in Kansas and took down the conference’s third seed. If Vancouver lives up to Sartini’s promise, it might cement his ascension to the permanent coaching job and set up a tasty Cascadia clash with the Sounders.

The other guarantee didn’t come until just two days before the Eastern Conference first-round game between the Philadelphia Union and the New York Red Bulls. In this case, Philadelphia is the favorite, the home team, and New York is on a late-season run into the postseason.

“We don’t drive to Philly just because ‘oh it’s nice to be in the playoffs.’,” Red Bulls coach Gerhard Struber told the media on Thursday. “We come because we think we belong in the next round. All respect to Philly, but we win on Saturday.”

New York’s improbable run to the postseason continued a streak of 12 years making it into the tournament. Famously, the New York franchise has never won an MLS Cup. While this year’s team, a 7th-seed playing in the same conference as the club that set a new points record, is a massive underdog, optimism is flowing from the club’s coach.

“We have a big confidence, a big conviction in our style of play. We know how dangerous (our tactics) can be for every team in this league, and we have to use that. We have the weapon in our hand and on Saturday we have to use it in a merciless way.”

Struber’s push back to the high-pressure tactics of Red Bulls teams of old is a significant part of the club’s success down the stretch. The Red Bulls are young, with only one regular, Sean Davis, older than 25 when the season began. Young legs make the Red Bull press go. Struber intends to unleash them on the Union on Saturday.

The game may come down to whose press is most effective. Jim Curtin’s team utilizes its own version of the tactic. While Philadelphia isn’t as relentless as New York, the Union will work to force the visitors into mistakes.

Despite New York’s consistent presence in the playoffs, the Union passed the Red Bulls by and now holds the upper hand in a geographic rivalry that lacks somewhat for real heat. New York has been around longer. Its academy was the first in the region to produce high-quality professionals. The club now has a massive corporate owner and should, by all rights, be a power in American soccer.

However, Philadelphia’s deft touch for recruiting coupled with investment in its academy turned it into a model MLS franchise and now has the Red Bulls playing catch up.

Saturday represents a chance for Struber’s team to knock the Union down while continuing its own surprising story. The Red Bulls may have several built-in advantages they aren’t using to good effect, but starting over with a young group of overachievers is a story fans can get behind. They have reason to believe.

It’s MLS playoff season, and guarantees are in the air. On Saturday, the wait ends. We’ll find out if Sartini and Struber’s bold words will turn into the fall’s first postseason upsets.