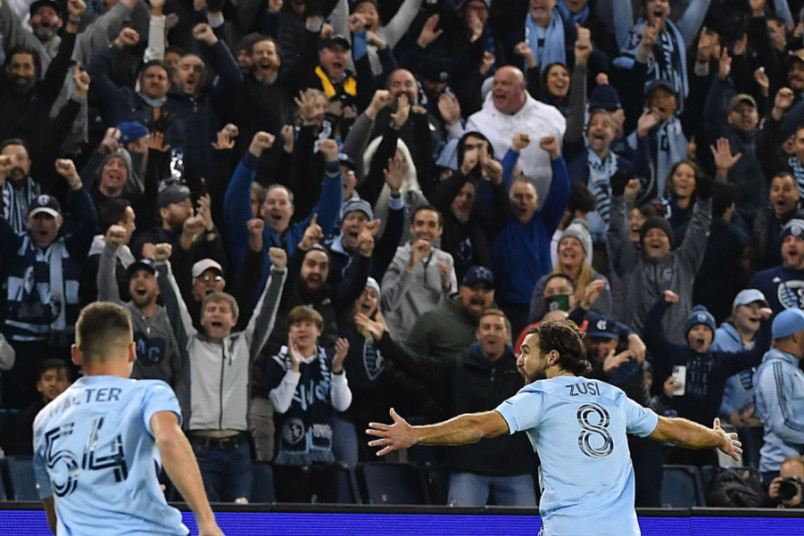 Monday’s soccer news starts with the MLS playoffs. Philadelphia needed extra time to advance past the New York Red Bulls 1-0 at home. With the game scoreless through 120 minutes, Jakob Glens scored in stoppage time of extra time. The Red Bulls exited with one shot on goal.

Sporting Kansas City beat Vancouver 3-1 at home to advance in the Western Conference. Khiry Shelton put Sporting up in the 17th with Vancouver’s Cristian Dajome converting a penalty in the 39th. Sporting went ahead for good through a Nicolas Isimat-Mirin goal in first-half stoppage time. Graham Zusi scored for Sporting in the 58th minute.

“The first game of the playoffs is always kind of a tricky one,” Zusi said. “The energy is just so high and the games can be a bit hectic. I thought we were very smart in our play tonight. We didn’t try to force anything while playing out of the back initially and then our guys up top, when we did play long, were fantastic in their hold-up play. They allowed the rest of us to come up there and help them as well.”

“Well, it’s the playoffs,” Atlanta coach Gonzalo Pineda said. “There are mental breaks at times, and you have some periods where you aren’t as focused as you should be. Those moments, we talked before about managing those moments. It happens. It’s about whether you can take advantage of those moments when you are ahead in the game or trying to stay calm and solve the pressure in a better way when the opposition is dominating you.”

Portland came back to knockout Minnesota 3-1 at home. Franco Fragapane put United up in the 11th minute. Portland equalized through Larrys Mabiala in the 43rd. Sebastian Blanco put Portland up in the 46th and extended the lead in the 66th.

Also in the soccer news, Manchester United is looking for a new manager after the departure of Ole Gunnar Solskjaer. “Ole leaves with our sincerest thanks for his tireless efforts as Manager and our very best wishes for the future,” the club statement read. “His place in the club’s history will always be secure, not just for his story as a player, but as a great man and a Manager who gave us many great moments. He will forever be welcome back at Old Trafford as part of the Manchester United family.”

Champions League on Galavision: Dynamo Kyiv vs Bayern Munich at 12:45pm. TUDN has Villarreal vs Manchester United at 12:45pm and Barcelona vs Benfica at 3pm. Concacaf League on FS2: Guastatoya vs Comunicaciones at 10pm. MLS playoffs on FS1: Nashville vs Orlando City at 8pm and Seattle vs Real Salt Lake at 10:30pm ET.