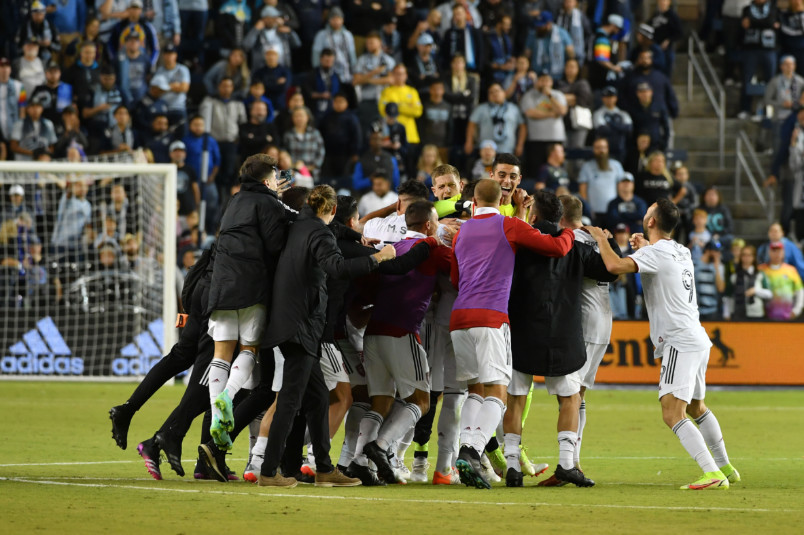 By J Hutcherson (Nov 9, 2021) US Soccer Players – The 2021 version of Decision Day played out with 5th through 7th-place at issue in both conferences. As far down as 10th-place in the East and 9th in the West could’ve ridden a confluence of results to make the playoffs. As it turns out, 5th through 7th stayed the same in the East, with Real Salt Lake passing the LA Galaxy for 7th in the West. Making it to game 34 with something to play for is only an accomplishment if it was more than a club reasonably expected. Where that wasn’t the situation, it ended up just another problem.

“Such an improbable year,” LAFC coach Bob Bradley said following a loss that decided 1st-place and kept his club out of the playoffs. “In so many games, we still were the tram pushing the game, creating the chances. Still, we’ve said so many times though, that we didn’t execute well enough. Take advantage of the chances we created. We still hurt ourselves with mistakes and not always getting some saves. That inconsistency is most disappointing.”

Unless we’re talking about New England, inconsistency was a hallmark across the league this season. Clubs that looked to have things turned around would have just enough games left to rip that perception apart. Up and down the tables, teams couldn’t seem to pull it together for long enough to lock in a playoff position.

As always with so many teams, there were a variety of reasons. Health of the squad, contributions from key players, roster adjustments that ended up destabilizing, technical staff choices. These contributed to stops, starts, and outright stalls across the league. From week-to-week, MLS parity loomed but not due to any normal version of competitive balance. Instead, it was waiting on teams to under-perform when they needed points. That trend left the top of the Western Conference open on Decision Day alongside 2nd-place in the East.

Reliably good became the high water mark in MLS over the summer, lasting through the end of the season. So few teams were able to embrace that for an extended amount of time that it became easy to see any team except New England slipping.

Even the Revs are well aware of the degree of difficulty right now. Following their 1-0 home loss to Inter Miami in a Decision Day game that wasn’t going to change anything for either team, New England coach Bruce Arena talked about one-goal games.

“I think there’s similarities to the playoff games,” he said. “Yeah, playoff games aren’t going to be 5-0. They’re going to be one-goal games. A lesson we learned tonight is that we better finish our chances and that’s always been the playoffs. They’re tight games. They’re intense. I should go over and bring some beers over to the Miami locker room because they gave us a good practice game for the playoffs. I think this is very similar to a playoff game and we fell short. So, that’s a good lesson for us.”

From the top playoff spot in the East to the last, that has to resonate. The New York Red Bulls’ social media team is reminding people that they only lost once over their final ten games, but it was to the team they finished a point ahead of in the table. Meanwhile, 8th-place DC played six games in October and lost four of them. All it would’ve taken was another point last month, and it’s DC in the playoffs on the total wins tiebreaker.

DC finished tied on points with 9th-place Columbus. Following a five-game losing streak in August, the Crew had to play themselves back into relevance and then contention. They came close, with coach Caleb Porter well aware that this is about a season and not just its final game.

“(E)very single game matters and every point matters and usually it comes down to the last day,” Porter said. “Most years, that’s what happens in this league with the parity, and sure enough, it came down to the last day, and we missed the playoffs by a point. I think when you get that close, and when you’re in the form that we’re in, it makes it hurt even worse.”

What it also does is make it more difficult to ask reasonable questions. There’s a balance between expectation and situational awareness. Seattle early on, and then New England from July 17 showed an opening for dominance this season. It simply took too much to take advantage of for the rest of the league.

Occupying a strange position where contenders would lose to stragglers week-by-week, teams began to show their weaknesses rather than strengths. Seattle’s fade was emblematic of that, not resetting expectations but showing how even good teams could become surprisingly vulnerable. Combine that with technical issues, and it produces the kind of soccer that leaves teams too close to each other in the table.

That’s the real story of MLS in 2021, trying to match an understanding of this league’s parity with a new version of pragmatism. 26 out of 27 teams did more than necessary to complicate their seasons. For the teams already starting to work toward a more controlled 2022, that means embracing the unknowables in this strange era of MLS while resisting the urge to rip apart what might work.