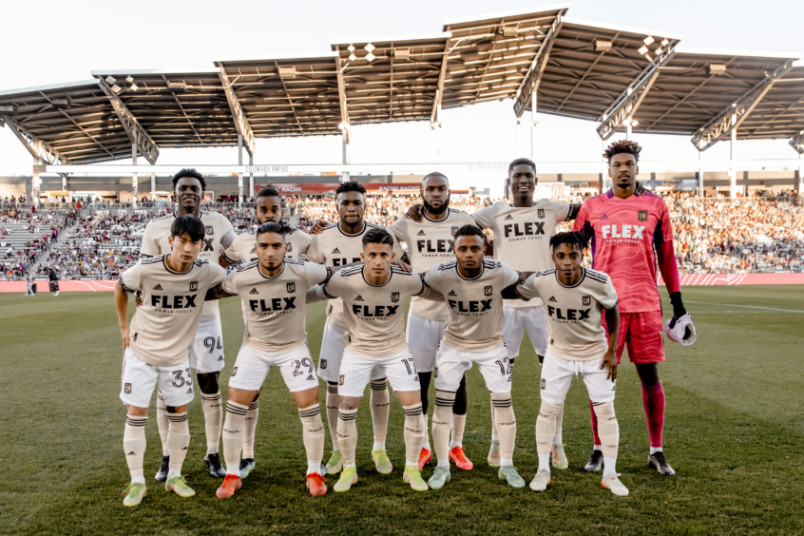 By Luis Bueno – RIVERSIDE, CA (Nov 10, 2021) US Soccer Players – If Los Angeles wants to be the center of the MLS universe, it’s going to need more from both of its teams. After the Covid-19 pandemic upended the 2020 season, things were set to return to normal. It was a fair expectation that would include LAFC and the LA Galaxy returning to their winning ways.

LAFC, of course, dominated the rest of MLS during the last normal season, winning the Supporters’ Shield and filling the nets an insane amount of times in 2019. Meanwhile, the five-time champion LA Galaxy added Greg Vanney to guide the team, certainly the last piece that would help restore their contender status.

Things seemed to line up perfectly for the Los Angeles teams to flex their collective muscle and dominate the league. We know now how it didn’t work out that way. In a league where there’s a dividing line between in and out of the playoffs, both LA teams ended up out. It wasn’t by much, but it means no playoff soccer in Los Angeles.

It’s easy to argue that this season ended up the worst for LA since MLS began in 1996. Sure, there have been years where no LA team made the postseason, but this is an issue of how it happened. The city is home to two teams backed by deep-pocketed investor/operators unafraid to spend money. Yet neither team is one of the last seven standing in the Western Conference.

Missing out on the playoffs is one thing, but coming up empty against teams with half the payroll when you are a major-market franchise and fancy yourself as the cream of the crop in MLS is quite another. That happened not once but twice this season.

The Galaxy has the bigger gripe for seeing their season end on Sunday. A 3-3 home draw with Minnesota would’ve paid off if Sporting Kansas City vs Real Salt Lake ended differently. It was a safe expectation that Sporting wouldn’t lose in pursuit of the Western Conference title. Unfortunately in 2021, there’s no such thing as a safe expectation in MLS.

Given the opportunity to handle their own business, the Galaxy took a point when it needed three. Looking back over the last three months, and it’s easy to play “find the missing point” that would’ve had them finishing in 7th-place. Instead, it was 8th tied on points with RSL but out of the playoffs. Three points behind them in 9th was LAFC.

Let’s give that some context. LAFC and the Galaxy are done with their seasons while other unheralded teams broke through this season despite longer odds than the LA teams. The Colorado Rapids, with the league’s lowest payroll, finished first in the regular season. Minnesota lost its opening four games of the season but finished 5th overall. Vancouver did not play a home game until August 21 and dealt with a coaching change but still made the postseason. Real Salt Lake also dealt with a coaching change, although unlike the Whitecaps this one was a surprise to the team. After a lifeline from a no-call on a penalty the Professional Referee Organization later apologized for, RSL made the playoffs on a dramatic goal late in stoppage time, eliminating the Galaxy.

Colorado claimed the Western Conference title with a 5-2 home win over LAFC, but that game opened up with LA looking for goals. Should either team have ended up in those Decision Day scenarios? Payroll information released by the MLSPA in September did them no favors.

The Galaxy has the league’s highest team payroll, at around $20 million, highlighted by Javier “Chicharito” Hernandez and his $6 million salary. LAFC has the highest-paid player in the league with former league MVP Carlos Vela earning $6.3 million this year. LAFC’s total has them in 5th-place overall and 2nd in the West to their city rivals.

While it would be easy to point at what both teams paid their top designated players, it’s more than that. Chicharito Hernandez and Carlos Vela both lost playing time with injuries. That changed the scope of their abilities to make the difference for their respective clubs. Both ended up winning games.

Chicharito had two of the LA goals in that 3-3 season-ending draw with Minnesota. That gave him 17 this year, an impressive figure surpassed by just two players this season. Add to that Chicharito doing it in just 21 games played. A calf injury kept him out from June 26 until September 11.

Vela’s injury issues left him with just ten 90 minute appearances this season. He finished with five goals and six assists, last playing a full game on August 15. Over the last ten games, Vela played four times for a total of 104 minutes. Loaning out Diego Rossi left LAFC without the same offensive push it expected to have. Injuries happen, but even in a roster-limited league like MLS, there need to be contingencies.

That said, it’s tough to know what either team will take away from missing the playoffs in 2021. Making the playoffs only to exit immediately can be as disruptive as missing out on them entirely. There has to be some eight given to externalities like injuries to key players stalling a season. At the same time, big-spending clubs expect returns in a league where that separates them.

Regardless of what happens over the offseason across Major League Soccer, it shouldn’t surprise anybody if both the Galaxy and LAFC are preseason playoff picks. It’s an understanding of how this league can work based on willingness to pay for talent. That’s not likely to change, either for the league or the two LA clubs.