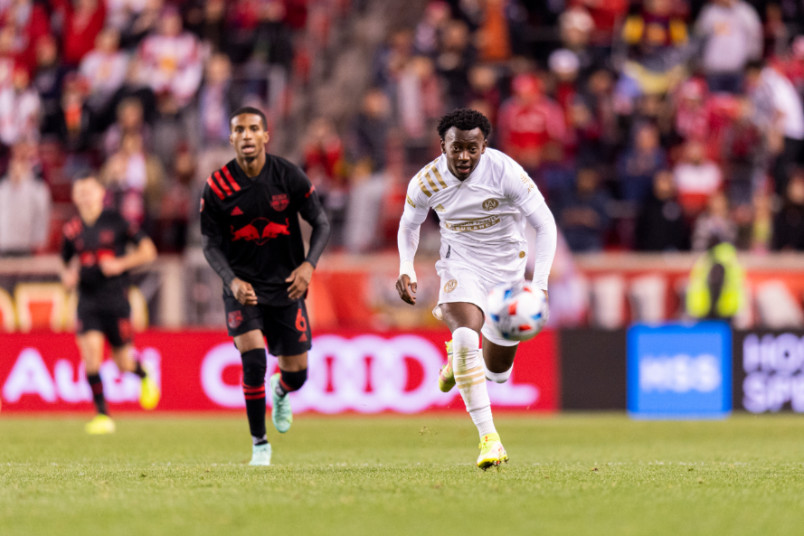 Thursday’s soccer news starts with every team in Major League Soccer set to play their 34th game of the season. The famously unbalanced schedule is now balanced, with more than most expected left to play for on Sunday. Decision Day looms after another midweek matchday in MLS.

Montreal shutout Houston 2-0 at home. Rudy Camacho scored in the 58th and Kamal Miller doubled the lead in the 62nd. Sebastian Breza kept the clean sheet with three saves. Montreal enters Decision Day in 8th-place, a point out of the final playoff spot. They host 6th-place Orlando City.

The Red Bulls and Atlanta drew 0-0 at Red Bull Arena. New York finished with three shots on goal to Atlanta’s one. The Red Bulls are in 7th-place, playing at Nashville. United is in 5th and is at Cincinnati.

“We need to respect Cincinnati, and also still need to try and get ahead of some teams in the standings,” Atlanta coach Gonzalo Pineda said. “Do our job and go to Cincinnati for another final and prepare the team for making the playoffs.”

In the season that keeps on giving when it comes to upsets, 12th-place Austin beat 2nd-place Sporting Kansas City 3-1 at home. Sebastian Driussi scored for Austin in the opening minute with Julio Cascante doubling the lead in the 22nd and Jaren Stroud scoring in the 60th. Johnny Russell pulled a goal back for Sporting in the 65th. Sporting hosts Real Salt Lake on Decision Day.

“You can’t give up the ball like we did off the kickoff and then receive a goal,” Sporting KC coach Peter Vermes said. “They come right down the middle of the field and they wind up scoring. You bring them into the game. The crowd gets into it. They’re into it. And then we give up a silly set piece goal and then we’re chasing the game. We’re chasing the game from the opening minute of the game. That’s what went wrong.”

Portland beat Real Salt Lake 3-1 away to clinch 4th-place in the Western Conference. Sebastian Blanco put the Timbers up in the 17th and an own-goal doubled the lead in the 38th. It was Blanco again in the 45th. Real Salt Lake’s Albert Rusnak converted an 88th minute penalty. Portland’s playoff position is locked. They host Austin to close out the season. Real Salt Lake is in 8th-place, two points out of the final playoff spot.

Tyler Adams subbed out in the 74th minute of RB Leipzig’s 2-2 home draw with PSG in group A. Christopher Nkunku scored for Leipzig in the 8th minute. PSG responded with goals from Georginio Wijnaldum in the 21st and 39th. Dominik Szoboszlai equalized for Leipzig two minutes into stoppage time. Adams saw yellow in the 25th minute.

“We really played well from the start,” RB Leipzig coach Jesse Marsch said. “And at the end, I think we were better. It’s a little disappointing that we only got a point from two good performances against such a good team, but it’s still a big step forward for us.”

Zack Steffen was on the bench for Manchester City’s 4-1 home win over Club Brugge. Phil Foden put City up in the 15th but an own-goal leveled the score in the 17th. Riyad Mahrez (54th) and Raheem Sterling (72nd) put the game away for Manchester City and Gabriel Jesus added a goal two minutes into stoppage time. Owen Otasowie wasn’t in the squad for Club Brugge.

Gio Reyna wasn’t in the squad for Borussia Dortmund’s 3-1 home loss to Ajax in group C. Dortmund’s Mats Hummels saw red in the 29th minute and Marco Reus converted a penalty in the 37th. Ajax left it late, but equalized in the 72nd and added goals in the 83rd and three minutes into stoppage time.

In the Championship, Tim Ream and Antonee Robinson’s Fulham had no issues at Blackburn Rovers, winning 7-0. Already ahead from a 6th minute Neeskans Kebano goal and Aleksandar Mitrovic scoring in the 19th, Fulham went a man up in the 30th minute. Harry Wilson added goals in the 54th and 58th and Kebano scored again in the 79th. Rodrigo Muniz finished off the goals in the 81st and a minute into stoppage time.

Matthew Olosunde wasn’t in the squad for Preston’s 2-1 win at Bournemouth. Benjamin Whiteman scored for PNE in the 52nd with Bournemouth equalizing in the 60th. Preston got its winner from Alistair Mccann in the 78th minute.

Ligue 1 on beIN Sport: Lens vs Troyes at 4pm. Liga MX on TUDN: Puebla vs Toluca at 9pm and UniMas: Mazatlan vs Chivas at 11pm ET.