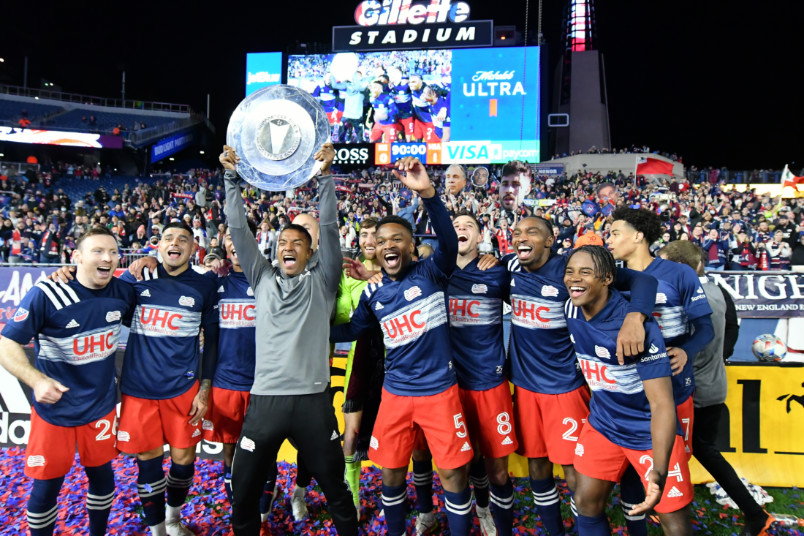 By Clemente Lisi – NEW YORK, NY (Nov 8, 2021) US Soccer Players – It’s playoff time in Major League Soccer. Well, it would be except for the international break and MLS not yet announcing the schedule. That slight pause in the action aside, Decision Day delivered in 2021. It put a cap on an interesting regular season where only one club ended up separating itself from the rest. Sunday’s final day schedule was the coda to plenty of drama that determined who would make the postseason in addition to seeding.

The ongoing pandemic and the return of crowds were the main themes of MLS in 2021. That’s no surprise, as any version of normal is dependent on the situation. On the field, it was the New England Revolution putting together the most dominant season in league history, setting the new record with 73 points. They won the Supporters’ Shield in easy fashion as their only potential rival Seattle faded in the West. As a result, the Revs, coached by Bruce Arena, will host all their playoffs matches, including the MLS Cup Final should they get that far.

Putting together a Shield and Cup double is tough in this league. Toronto did it in 2017, the last of seven teams to pull it off. So calling the Revs the clear favorite carries that caveat. Winning a lot over the course of the 34-game season may not carry into a single-game elimination tournament.

Meanwhile, the Colorado Rapids edged the Seattle Sounders and Sporting Kansas City to clinch the top seed in the Western Conference on Decision Day. It’s a different twist on the same question. How much does regular season success count in the postseason?

The MLS Cup Playoffs start on November 20, following the international break, with two first round matches. All matches are single-elimination, meaning anything can happen. For example the Revs play the winner of NYCFC vs Atlanta United, two teams that can pull off a surprise this fall. The MLS Cup Final will take place on December 11. Here are five stories to follow during the playoffs.

Red Bulls make the playoffs again, but can they do more?

The New York Red Bulls were left for dead just a few weeks ago, but they pulled off the improbable by finishing 7th in the Eastern Conference to grab the final playoff spot. It was the 12th straight year that the Red Bulls made it to the postseason, the second-longest streak in league history behind Seattle’s 13.

But the surging Red Bulls have also become known for their futility no matter how good or bad they have been during the regular season. The team put together a 7-4-1 record in their final 12
matches to end the regular season. RBNY now needs to keep winning in the postseason, where they face rivals and 2nd-seed Philadelphia. History isn’t on New York’s side, once again raising the question about how much difference making the playoff may make when it comes to building a true contender.

Amid a series of highs and lows, Philadelphia’s 2nd-place finish speaks to a team finally getting it together. This comes after the team lost in the semifinals of the Concacaf Champions League, further than anyone could have predicted months earlier. Now the Union hopes to embark on a similarly deep run in the MLS Cup Playoffs.

No strangers to late-season collapses, the Union finished strong thanks to largely to a 11-3-3 home record. Head coach Jim Curtin has proven to be a tactical mastermind, utilizing a midfield diamond that has lent support to Kacper Przybylko. He recorded 12 goals and four assists and will need to stay consistent in the postseason should the Union want to go far.

The Sounders may have missed out on the top seed in the Western Conference by a single point, but they remain a very dangerous side to play in the playoffs. While it’s true that teams look to finish the regular season strong so they can hit their stride in time for the games that really count, the Sounders enter the postseason in poor form.

Still, this is a team that has made the final in four of the last five seasons winning two titles. They have the players, particularly team top scorer Raul Ruidiaz and a healthy striker in Jordan Morris, to make a run. Yes, their defense has been suspect, and the front line not always healthy, but coach Brian Schmetzer usually finds a way to win the big games. It’s easy enough to turn that around on the missed opportunities over the past few weeks, but as Schmetzer has asked, would you want to face them in the playoffs?

NYCFC versus Atlanta is the first round’s toughest match-up

There are plenty of tasty games to look forward to later this month, but nothing will match the intensity of when 4th-seed New York City FC takes on 5th-seed Atlanta at Yankee Stadium. NYCFC have looked like MLS Cup contenders for the past few years, while Atlanta is coming off a particularly difficult season after the firing of head coach Gabriel Heinze back in July. NYCFC had the better of the regular-season match-ups: a 1-0 win on June 23 (when Heinze was still at the helm) in New York, while the teams played to a 1-1 draw on October 20 in Atlanta.

New York features league top scorer Valentin “Taty” Castellanos, with 19 goals this season to take the Golden Boot. Atlanta, however, have Martinez, one of the most lethal strikers in the league. It will be a battle between two offensive-minded sides aiming to give the Revs a go at it in the Conference Semifinals.

Can anyone stop the Revolution?

This remains the biggest question of them all. Arena has revolutionized this team and found a way to win with players that were often unheralded in the past. Yes, Supporters’ Shield-winning teams have struggled, but you have to give this team respect after shattering the regular-season points total.

New England isn’t perfect, but they have dominated many games and gotten a lot out of goalkeeper Matt Turner and midfielder Carles Gil, who led the league in assists with 18. Arena has shown that he can get tons out of his players as he looks to capture a sixth MLS Cup. Much of that depends on whether New England can make the most of their scoring chances and translate dominance and possession into wins.