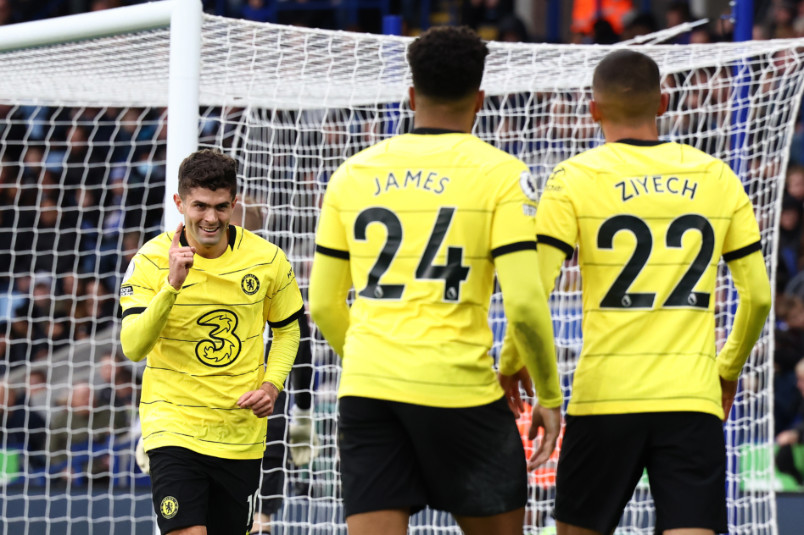 The roundup of USMNT players in Europe and Brazil starts in the Premier League where Christian Pulisic subbed on in the 62nd minute and scored in Chelsea’s 3-0 win at Leicester City. Chelsea’s Antonio Rudiger opened the scoring in the 14th and N’Golo Kante made it 2-0 in the 28th. Pulisic scored Chelsea’s third goal in the 71st and had a goal disallowed in the 81st.

“For me it’s just good to be back playing with the team after quite a long time out,” Pulisic said. “I’m happy I could come in and make an impact in this game and I’m ready to start my season. I’m gaining confidence and feeling much better now.”

Josh Sargent subbed on at halftime of Norwich City’s 2-1 home win over Southampton. Falling behind in the 4th minute, Teemu Pukki equalized for Norwich in the 7th. Grant Hanley put Norwich up for good in the 79th minute.

Tim Ream and Antonee Robinson’s Fulham won 4-1 at home over Barnsley in the Championship. Aleksandar Mitrovic scored in the 24th and Fabio Carvalho doubled the lead in the 34th. Neeskens Kebano made it 3-0 in the 72nd with Barnsley pulling a goal back in the 78th. Harry Wilson scored Fulham’s fourth goal in the 81st. Robinson subbed out in the 85th minute. Lynden Gooch’s Sunderland beat Ipswich Town 2-0 at home in League One. Luke O’Nien scored in the 85th and Aiden McGeady converted three minutes into stoppage time. Gooch saw yellow in the 34th.

Tyler Adams’s RB Leipzig lost 2-0 at Chris Richards’s Hoffenheim in the Bundesliga. Diadie Samassekou put Hoffenheim up in the 12th minute and Mu’nas Dabbur doubled the lead in the 68th. Richards subbed on in the 73rd minute.John Brooks’s Wolfsburg drew 2-2 at Arminia Bielefeld. Trailing from a goal in the 11th and a 54th minute penalty, Wout Weghorst scored for Wolfsburg in the 62nd. Lukas Nmecha equalized a minute later.

“Looking at the final 30 minutes, maybe we could even have taken more from the game,” Wolfsburg coach Florian Kohfeldt said. “But if you’re 2-0 down after 60 minutes, then you have to be happy to take a point. Overall, we just need to play better over the 90 minutes so that we don’t get into the situation where we need to play like we did for the last half an hour.”

Andrew Wooten subbed out in the 72nd minute of Osnabruck’s 3-3 draw at Waldhof in the 3.Liga. Lukas Kunze put Osnabruck up in the 29th minute. Waldhof responded with a 36th minute equalizer and a penalty in the 44th. Ba-Muaka Simakala equalized for Osnabruck in the 65th. Waldhof converted another penalty in the 76th with an own-goal leveling the score in the 82nd. Terrence Boyd scored in the 53rd minute of Hallescher’s 2-1 home loss to Borussia Dortmund II. Dortmund scored in the 30th and 63rd minutes.

Luca de la Torre’sHeracles beat Fortuna Sittard 3-1 at home in the Eredivisie. Trailing from the 9th minute, Ismail Assaoui equalized for Heracles in the 6th and scored again in the 30th. Kaj Sierhuis made it 3-1 in the 67th.

Weston McKennie’s Juventus won 2-0 at Lazio. Leonardo Bonucci converted penalties in the 23rd and 83rd. Gianluca Busio subbed out in the 80th minute and Tanner Tessman subbed on in the 59th minute of Venezia’s 1-0 win at Bologna. Busio assisted on David Okereke’s goal in the 61st minute. Busio saw yellow in the 47th minute. Andrija Novakovich subbed on in the 71st minute of Frosinone’s 0-0 home draw with Lecce in Serie B.

Yunus Musah subbed on in the 77th minute of Valencia’s 0-0 draw at Real Sociedad in La Liga. Valencia played a man up from the 76th minute. Musah saw yellow in the 84th. Matt Miazga subbed on in the 73rd minute of Alaves’s 2-2 draw at Sevilla. Victor Laguardia scored for Alaves in the 5th with Sevilla equalizing in the 38th. Joselu converted an Alaves penalty seven minutes into first-half stoppage time. Sevilla equalized from the penalty spot two minutes into stoppage time.

Tim Weah’s Lille drew 2-2 at Monaco in Ligue 1. Jonathan David converted a 5th minute penalty and doubled Lille’s lead in the 9th. Monaco responded with a goal in the 41st, going a man down in the 78th. Monaco equalized in the 83rd. Weah saw yellow in the 73rd minute. Konrad De La Fuente’s Marseille saw its game at Lyon suspended after a bottle hit Dimitri Payet. Nicholas Gioacchini subbed out at halftime of Montpellier’s 2-0 loss at Rennes. Trailing from goals in the 8th and 28th, Montpellier went a man down in the 41st minute.

Sam Vines’s Royal Antwerp lost 2-1 at STVV. Falling behind to goals in the 31st and 37th minutes, Mbwana Samatta scored for Antwerp in the 82nd minute. Tyler Boyd’s Rizespor lost 3-0 at Konyaspor in the Super Lig. DeAndre Yedlin’s Galatasaray lost 2-1 at home to Fenerbahce. Muhammed Kerem Akturkoglu scored for Galatasaray in the 16th minute. Fenerbahce equalized in the 31st, went a man down in the 82nd, and scored again four minutes into stoppage time.