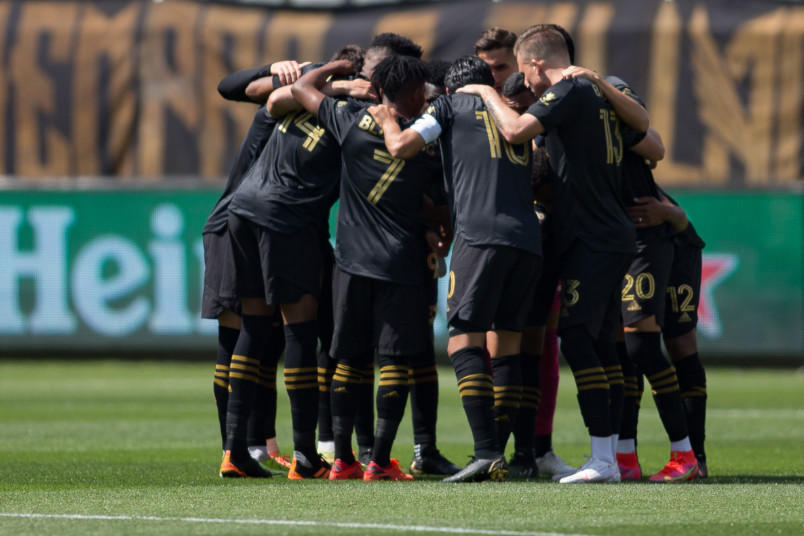 By Luis Bueno – RIVERSIDE, CA (Nov 24, 2021) US Soccer Players – LAFC’s 2021 season did not go nearly as planned. What was supposed to be a continuation of their successful beginning in MLS turned into something else entirely. After a 2020 season where they finished 7th and exited in the opening round of the playoffs, LAFC struggled to be a factor in the Western Conference. Eventually missing out on the playoffs altogether, they’re now planning for the 2022 season without Bob Bradley.

LAFC and Bradley parted ways a week ago, saying goodbye to the only coach in its short history. Bradley was the perfect hire for the expansion club, the kind of person that could build and rebuild. That’s a short list in Major League Soccer, the league that pushes against the idea of dynasties.

Instead, Bradley is now rebuilding Toronto FC as their coach and sporting director. The move to the Eastern Conference puts him in a similar situation to what he left in Los Angeles. It’s a team expecting plenty after disappointing results.

What LAFC learned about itself in 2021 is the question. Reaching the postseason the first three years of its existence meant that the playoffs were not a goal but an expectation. Fueling that were better roster choices than we saw this season. Almost all of those were situational.

The club loaned Brian Rodriguez to Spanish side Almeria, essentially cutting ties with the young Uruguayan. However, it did not sever them. Instead, the move handcuffed LAFC. Rodriguez’s loan was set to become a permanent transfer had Almeria reached the first division. That didn’t happen, with Rodriguez returning to LAFC during the summer.

Instead of using his Designated Player slot on another player, LAFC had to wait on the outcome of Rodriguez’s loan. In the meantime, the club had to redesign its offense. Never one-dimensional given their attacking options, an advantage became a problem for LAFC.

Filling in for Rodriguez by committee, the goals weren’t falling regularly enough to keep the team out of trouble. Last season’s Golden Boot winner Diego Rossi scored six goals before leaving the club on loan to Fenerbahce at the end of August. Rossi was a dynamic part of the club’s attack and could have played a role down the stretch. LAFC management decided otherwise, making a move that complicated Bradley’s forward problems.

Now, had the Covid-19 pandemic not upended the 2020 season, perhaps Rossi would have made the move to the Old World a year ago. Maybe he was playing on borrowed time with LAFC all along. But he was there, certainly capable of making a difference in a playoff push.

The biggest issue, though, was Carlos Vela, the team’s heart-and-soul. Vela is one of the top talents in MLS, no question. His 2019 season was the best in MLS history. When healthy, he’s a difference-maker in this league. Unfortunately for LAFC, injuries limited his availability this season, starting 15 games, playing in 20, and out for the playoff push. Had he been healthy enough to play even 30 of the 34 games this season, we’re not talking about LAFC’s problems.

Depth is always going to be an issue in MLS, and Vela highlighted that for LAFC. It wasn’t just Rodriguez on loan for the start of the season or Rossi’s loan over the final few months. It was an inability to plug in the type of players who can make up for those losses. It doesn’t take matching the output of goals. It takes doing enough to get points.

Since we’re talking about an elite club in MLS, it wasn’t all problems. Far from it. Cristian Arango joined in the summer transfer window. Arango came out of nowhere and was a revelation in the league, scoring 14 goals in 17 games. Rossi’s six was the next highest on the LAFC scoring chart. Arango stepped up, eventually winning Newcomer of the Year.

Imagine him playing in a first-choice LAFC attack, another critical piece joining at just the right time. LAFC is once again a juggernaut, not concerned about the bottom rung of the playoff table. At +2, LAFC finished with a higher goal difference than any team that didn’t make the playoffs and better than three of the teams that did. That’s without full seasons from any of its designated players.

Through it all, Bradley was there pulling the strings. Bradley did what he could to get the team to play cohesive and attacking soccer. Their 5-2 Decision Day loss was LAFC pushing everything towards an unlikely result. The Colorado Rapids took full advantage at home, winning the regular season Western Conference title. If LAFC needed an example of how a team can play beyond its component parts, they lost to one on the final day of the season.

Given the changes we’ve already seen, how long 2021 resonates with LAFC becomes the question. They’ve already made two major moves. The Vela loan and now Bradley making his exit by mutual agreement. It can’t have come as a surprise to LAFC management that a coach of Bradley’s stature wouldn’t be out long, though there might be some solace with him in the other conference.

Still, Toronto in 2021 under Bradley could end up a referendum on LAFC. Should Bradley succeed in what’s a hallmark of this league, the offseason turnaround, it only adds to the pressure on his replacement at LAFC. Whoever takes that job immediately shoulders the same pressure that was on Bradley. Continue what they started in the early years of the club. Anything else is simply not the game LAFC ever intended on playing.