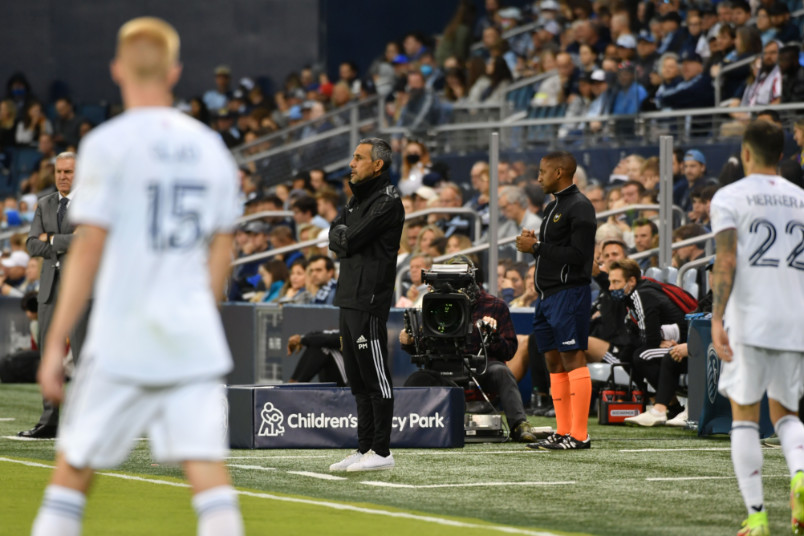 By Jason Davis – WASHINGTON, DC (Nov 10, 2021) US Soccer Players – Decision Day 2021 is in the books. On the final day of the MLS regular season, a few clubs rose to the occasion. A few others crumbled in the face of a challenge. Playoff positions changed hands, with the league now ready to begin its frenzied sprint through the postseason and the MLS Cup final on December 12.

For the clubs that made the field, attention now switches to the first-round match-up and a quest to win a championship. Some of those clubs know they are longshots but will convince themselves they have a real chance. A few started 2021 with big expectations and are still in line to meet them. Those that scraped by and made the playoffs can claim some measure of success. That should play a significant role in coaching decisions over the offseason. The group of teams that missed the playoffs will now go into overdrive to find their next boss.

FC Cincinnati’s new general manager Chris Albright is looking for someone willing to take on the massive task of turning a team with three consecutive last-place finishes into a winner. Newly named Houston Dynamo GM Pat Onstad has a similar challenge in Texas following the decision not to re-sign Tab Ramos. Chicago is starting over, again, amid an attempt to recapture the public’s attention in a big market. FC Dallas made a move that seemed to indicate greater ambition than just developing the next crop of outgoing MLS transfers by firing Luchi Gonzalez but now must find the right replacement.

And then there’s LAFC. Bob Bradley’s contract expires at the end of the season, with the club finishing in 9th-place and out of the playoffs. If nothing else, LAFC enters the beginning of its offseason with significant questions that will dictate the direction of the club in 2022 and beyond.

Bradley is still working to deliver on the promise of, as he calls it, “our football” in four seasons in Los Angeles. 2019’s dominant regular season will remain a part of MLS history even if it’s no longer the record. However, one Supporters’ Shield doesn’t make up for the lack of an MLS Cup.

Whatever does or doesn’t happen with Bradley at LAFC, the club is in an intriguing position. Record aside, it’s still an elite MLS team with the component pieces to contend. Bradley stressed that over the course of this season. A bit of luck with injuries and outcomes, and LAFC is preparing for the playoffs or even waiting for the first round to conclude.

Now, there’s at least the indication of pressure to revamp the squad for 2022. Carlos Vela’s status is unclear with his contract also expiring after the season. It wouldn’t be surprising if LAFC takes a hard look at the current state of the team. Missing the playoffs for the first time in club history will force a reckoning for an organization with such lofty ambitions.

Rumors are already drawing a line between Bradley’s potential availability and the situation at Toronto FC. Toronto has the resources, but finishing 13th in the East shows how that can push up against the realities of the regular season. It’s always how you spend in a league with strict financial controls.

Then there’s the situation in Chicago. Whoever takes over will be working with a very different squad. Chicago announced on Monday a slew of roster moves that will mean the departure of high-salary players like Robert Beric, Alvaro Medran, Francisco Calvo, and Johann Kappelhoff.

The task for Albright in Cincinnati moves into a new phase with the conclusion of the regular season. Since part of what made Albright so appealing is his MLS knowledge, the expectation is that the eventual coaching hire will have a similar experience. That assumption hasn’t led to a list of rumored candidates.

Meanwhile, FC Dallas’s situation is bigger picture. Gonzalez helped build their vaunted academy system. There’s a difference between being the head coach of the first team and a crucial part of a club’s ambitious approach to player development.

Only one other club missed the playoffs and needs a new field general. Ramos exits with a record of 10 wins, 21 draws, and 26 losses. What the club wants under a new investor/operator and a new GM is to win, but how they do it will depend significantly on the coaching hire. The budget should be there to improve the squad, changing the scope of the job Ramos held.

That brings us to two clubs that made the playoffs and the interim head coaches that got them there. Real Salt Lake and the Vancouver Whitecaps both bucked the odds by making it into the Western Conference postseason field. That achievement makes the choice of who to hire for the permanent head coaching position at each club just a little more interesting.

Both RSL’s Pablo Mastroeni and the Whitecaps’ Vanni Sartini have strong claims to the full-time job in their respective teams. Reports have Real Salt Lake interviewing potential candidates while the club’s investor/operator situation plays out. Mastroeni is in charge of a playoff team, capable of making his case by winning games.

Sartini is a different situation. The 44-year-old Italian with the effusive personality and a penchant for choppy English has won everyone over in British Columbia. The run of results is one part of his resume, but perhaps equally important is the change of culture he brought to the job at a club that desperately needed it. That’s not normally the role of an interim coach.