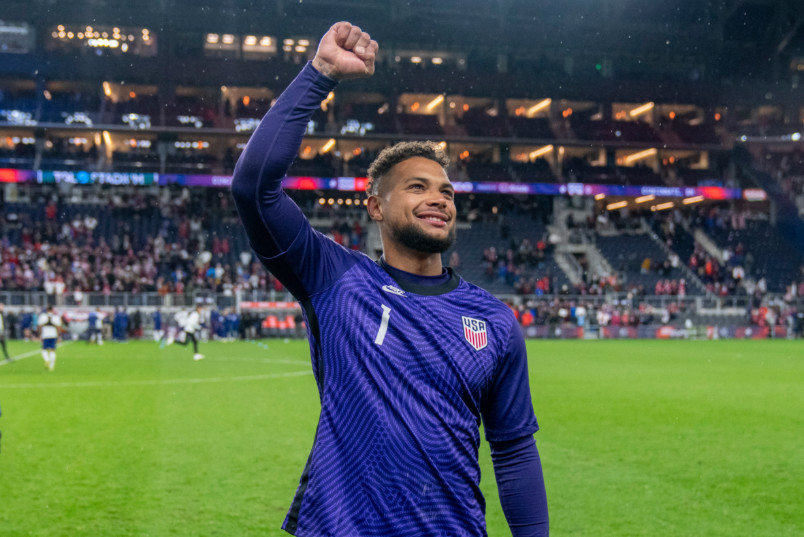 Monday’s soccer news starts with the USMNT’s win over Mexico in Cincinnati. The November schedule opened with three points at home in Concacaf World Cup qualifying. Taking nothing away from how the USA got those points, that’s the clear takeaway from what happened at TQL Stadium. On the road to qualification, points are the only thing that matters.

The win over Mexico has the US entering the second matchday of the month in 1st-place in the Octagonal on goal difference. That’s now the focal point against Jamaica on Tuesday (5pm ET – Paramount+), holding onto what they earned by beating Mexico.

“We’ve earned respect the last couple of times we’ve played them,” Pulisic said during the postgame press conference. “They understand what we’re about. We understand what they’re about. That’s what makes a great rivalry, and I’m just really happy that we could come out on top again tonight. We knew it was always going to be a good game against Mexico, and to get three points just helps us get a lot closer to qualifying for the World Cup.”

It’s also potentially a transitional game in this World Cup qualifying cycle. The US has already shown it can recover from adversity during both the September and October three-match windows. In a two-game scenario, they play at Jamaica needing to quickly rework the starting lineup without Miles Robinson (red card) and Weston McKennie (yellow card accumulation). What USMNT coach Gregg Berhalter faces is the latest version of the selection scenario issue.

Due to injury, suspension, and travel restrictions, USMNT coach Gregg Berhalter doesn’t have the luxury of expecting first choice. Sergino Dest was out for this camp, taking away a unique talent that can quickly shift from defense to attack as his role develops at FC Barcelona. Gio Reyna is still recovering from the injury suffered on USMNT duty in September. What that creates are multiple riffs on first-choice.

Jamaica is another opportunity for players to complicate that first-choice discussion. It’s a stronger version of Jamaica than the one the USMNT shutout 2-0 in Austin on October 7. El Salvador needed a 90th minute goal at home to equalize on Friday. Aston Villa’s Leon Bailey started in that game, and West Ham’s Michail Antonio subbed on. Jamaica only held 40% of the possession and had issues connecting passes, but the expectation is a higher level of play from a team that drew 0-0 at home with Canada last month.

Canada, with their own game-changing Champions League winner, hosts Mexico. While it’s easy to get caught up in criticizing El Tri’s stalled offense in Cincinnati, it’s tough to see them finishing November with no points. That adds to the pressure for Canada following their 1-0 win over Costa Rica in Edmonton. A draw would see them pass Mexico on goal difference for at least 2nd-place. With the Jamaica vs USA game already over before Canada and Mexico take the field, both teams will know exactly what they’re playing for on Tuesday.

“We know we have a tough game coming on Tuesday against Mexico and ultimately, we’re one point off the lead and it’s time to move on and focus on the next match,” Canada’s Samuel Adekugbe said.

Moving to the soccer news, The Washington Post’s Steven Goff’s match report from the USMNT win in Cincinnati. SI’s Brian Straus with a revival game for the USMNT. ESPN’s Jeff Carlisle on a message sent at the midway point of the Octagonal. The Athletic’s Paul Tenorio highlights Tim Weah who had the assist on the Pulisic goal. The Cincinnati Enquirer’s Pat Brennan asks if this was the last great home World Cup qualifier for the USMNT.

World Cup qualifying on ESPN2: Wales vs Belgium at 2:45pm. Paramount+ and Universo have Jamaica vs USA at 5pm. Canada vs Mexico is on Telemundo at 9pm.