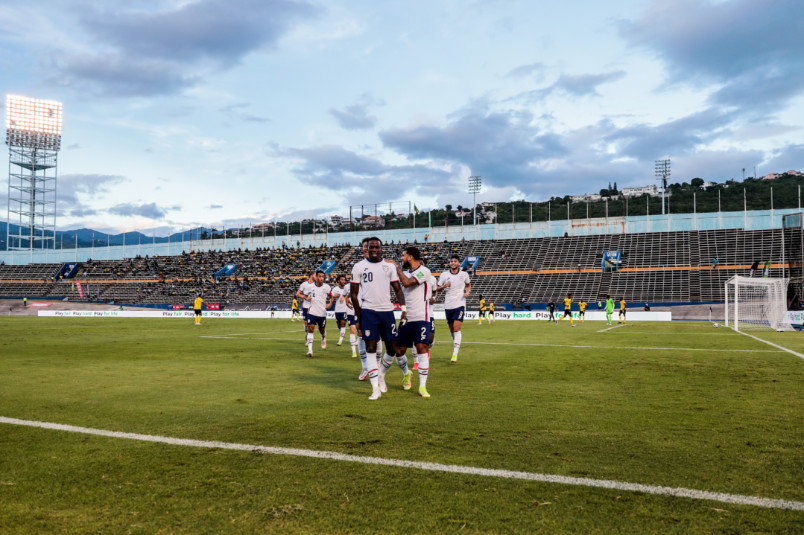 By Jason Davis – WASHINGTON, DC (Nov 17, 2021) US Soccer Players – The United States Men’s National is just fine. Following a 1-1 draw against Jamaica on Tuesday night in Kingston, the Americans sit on 15 points after eight games in the final round of Concacaf World Cup qualifying. That’s good enough for 2nd-place following other results around the region on the final matchday of 2021.

It’s fine. There’s nothing to worry about. Just a few days ago, the USMNT and its fans were reveling in a comprehensive 2-0 victory over Mexico in front of a vibrant crowd in one of the country’s sparkling new soccer stadiums.

That victory raised the ceiling on the potential for a young group still weaving its way through a difficult qualifying process. It’s one that’s throwing new things at both players and coach. That game showed what’s possible not because of the score line, but because the Americans controlled the match through the bulk of the proceedings. It’s one of the more under-discussed story lines of the Octagonal so far. USMNT coach Gregg Berhalter is working through his own steep learning curve.

Tuesday’s result at Jamaica’s National Stadium, a venue known colloquially as “The Office,” served as a reminder that the qualifying process is work. Tuesday’s return to earth muted the highs of Friday night. Rather than the win over Mexico launching the United States to a dominant win over Jamaica, the Reggae Boyz and the playing surface humbled the visitors.

For Berhalter, still tweaking his approach to managing a collection of precocious talents playing their club soccer across Europe and the US, the draw was in his words, “a good result.”

“We’re not looking at it as a disappointing result,” Berhalter said after the match while acknowledging that the players were themselves disappointed. “We’re looking at it as a good result. Any time you can get a point away from home is a good thing in Concacaf qualifying. I want to be very clear by saying that.”

The positive messaging makes sense as Berhalter continues his work with a group that is susceptible to swings in morale simply because of its youth.

“For the guys to have their heads down because we wanted more is completely natural,” he added. “But this is a point we will absolutely take on the road.”

Beating Mexico pushed expectations up, meaning Berhalter must now manage the inevitable letdown. The game played out as so many Concacaf road qualifiers do. Against a physical Jamaica team on a poor playing surface, the Americans struggled to take control of the game.

Of the players who did manage to build on the win over Mexico, winger Timothy Weah stood out. Weah assisted Christian Pulisic on the opener in Cincinnati with his ability to beat defenders 1v1 on the wing. Against Jamaica on Tuesday, he dribbled three Reggae Boyz in the box before applying a deft finish past goalkeeper Andre Blake.

Weah’s play was especially important because of Pulisic’s limited time on the field over two games and because of the absence of Giovanni Reyna. The Lille attacker’s influence on the team stands as a reminder that depth in certain areas is a strength of the USMNT at the moment.

Injury and issues of form may keep the US from being at “full strength” if such a thing is possible in any qualification window. Reaching Qatar will heavily depend on depth. November served as a chance for a few players to stake their claims to places in the roster moving into 2022.

Some absences are felt more than others. Berhalter has options in the forward line, as evidenced by Weah’s one goal, one assist window, and by the play of Brendan Aaronson on the other side. The calculation is different in midfield, where the United States felt the lack of Weston McKennie’s industry in Jamaica.

Berhalter turned to Gianluca Busio in McKennie’s stead. While the Venezia FC man didn’t play poorly, the game did not seem made for his brand of thoughtful play. Illness made things difficult for Busio’s midfield partner, Yunus Musah. Just 18-years-old Musuh has moved from “not officially cap-tied” in June at the Nations League to “indispensable starter” at the end of 2021’s qualifying schedule.

“[Musah] was a little bit under the weather. He came down with strep throat,” Berhalter revealed after the game. “We could tell that was taking a toll on him.”

Musah left the match in the 66th minute, replaced by Kellyn Acosta. The move served to both shore up the midfield defense and insert fresh legs for a player fatigued after playing more than double the minutes in two internationals than he had for his club team in the last month.

That’s part of the USMNT reality as well. Despite the obvious talent in the pool, not every key player is getting significant time with his club team. Berhalter’s approach includes data provided by clubs about a player’s training levels, the better to pick a lineup of players with match fitness even if their recent game time is minimal.

That’s another aspect of “fine.” The USMNT is attempting to qualify while dealing with the imperfect. Imperfect rosters, imperfect conditions, imperfect experience. Experience is something earned over time.

Between the five most prominent USMNT names – Pulisic, Reyna, McKennie, Tyler Adams, and Sergino Dest – only Pulisic began the cycle with a qualifier cap on his resume. That reflects in nearly every USMNT lineup Berhalter picks in the Octagonal. On Tuesday night, the lineup had an average age of 22 years, 341 days, the second youngest to start a World Cup qualifier for the USMNT.

“I think we’re on the right track,” Berhalter said in Kingston. “We’re having to get the guys experience on the fly. We’re playing an Olympic age team. It’s really learning as you go.”

By the end of Tuesday, the USMNT found itself in 2nd-place in the Octagonal, one point back of a Canadian team that bested Mexico in Edmonton. The table, as it always does, will play on the psyche of teams and fans alike. It’s sometimes difficult to remember that where you are now only matters as a means to finishing in the top three come March.

The man in charge of getting the USMNT into that top three sees positives in the first eight games. He believes his team is right where it needs to be. He believes that the best word to describe the group, young and hungry, but prone to dips in form, is “resilient.”

“There are ups and downs in qualifying,” Berhalter said. “We talk about the roller-coaster that it is. But we just kept slowly and steadily climbing. I’ve been happy with most of the home performances. Our road record is pretty much like expected. We would have loved to have that one point in Panama. We’ve been resilient. This group has character. We’re on the right track.”