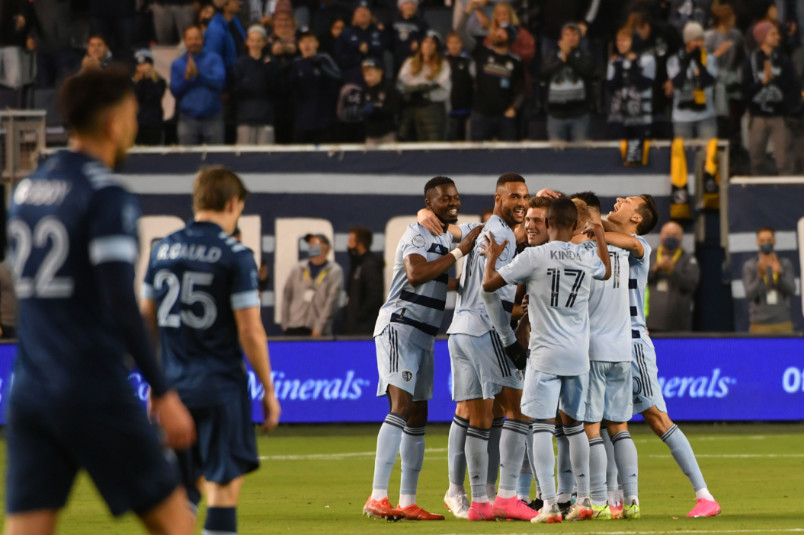 By Jason Davis – WASHINGTON, DC (Nov 24, 2021) US Soccer Players – One more game. For six Major League Soccer teams, that’s all the playoffs represented in 2021: One more game. A loss in the first round meant that a marathon 34 game regular season grew by exactly one more run out before the long, dark winter of the offseason arrived. To say that’s a letdown would be a severe understatement.

With so much effort expended just to reach Game 35, it’s worth asking what that one extra match changes for clubs who fell at the first playoff hurdle. Is just making the playoffs enough to raise optimism for the future? Does the way the defeat was delivered matter?

MLS is a fertile breeding ground for delusion. Even for teams that have a realistic view of their place in the league’s increasingly stratified competitive environment, it’s easy to fall into the trap of believing that you’re just one or two moves away from putting it all together.

Just making the playoffs in a league that sends more than half of its teams to the postseason is not a significant achievement. However, it does provide enough of a reason for a club to keep things the way they are.

The practical assessment begins now for those ousted in the first round. The winter may feel long and dark, but the work of preparing for 2022 cannot wait. If the teams that lost in the first round are going to turn 35 games into 36 or more next year, they must be sharp in their decision-making and pointed in their planning.

The reward for sneaking into the playoffs via one of the bottom three seeds in each conference is a road trip. More often in MLS than in any other notable soccer league, going away means coming up on the short end of the scoreboard. Home advantage in the MLS Cup playoffs matters more than ever, thanks to the knockout-style tournament of the modern era. There’s no longer a chance to balance an away leg with a match at home. In 2021, each MLS playoff game delivers a winner, even if it takes extra time and penalty kicks to get there.

What that creates are small margins and little room for error. The New York Red Bulls did everything they could to make things ugly on the banks of Delaware in their first-round matchup against the 2nd-seed in the Eastern Conference, the Philadelphia Union. It took a wondergoal from Union center back Jakob Glesnes to beat them, and now the Red Bulls enter the winter wondering what might have been.

Even with the disappointment of the result, the Red Bulls are in a better place than most first-round losers. The 35th game had real value for a young team under a coach tasked with returning New York to its most intense press-happy ways. Getting to the playoffs at all can be called an accomplishment, especially in light of the late-season push it took for Gerhard Struber’s team to get there.

Fans in New York can take issue with the direction of the team as dictated by executive leadership, but no one should fault the team on the field for its effort. While it’s not always the case, game 35 for New York this year makes for real hope for extra games in 2022.

If New York’s head of sport Kevin Thelwell is to be taken at his word, the Red Bulls could head into next year with a hardened group of young players who just pulled off a difficult feat by making the postseason plus a few weighty additions. Thelwell pointed to roster flexibility for the New Jersey outfit and the corporate backers of the team not lacking for resources if they so choose to spend.

Red Bull Global is spending. They’re building an 80-acre training facility in northern New Jersey. It’s how much they choose to invest in the squad that will determine the scope of the offseason. The fine line between optimism and disappointment after one more game is in evidence in the difference between the energy around the Red Bulls on one coast and the Vancouver Whitecaps on the other.

The young Red Bulls can hold their heads high and steam into the offseason talking about growing into an MLS Cup contender. The Whitecaps will spend the offseason working to convince themselves that the late-season run to the postseason will lead to more if, as expected, Vanni Sartini drops the interim title as coach.

Sartini’s highly spirited approach to coaching served the Caps in the months following Marc Dos Santos’s ouster. Simply by making the postseason, Sartini likely earned the right to coach Vancouver in 2022. But the fun of that run could mask deeper issues with a club that is facing a complicated offseason.

Ryan Gauld’s excellent debut after arriving mid-season is a reason for higher expectations in Vancouver. Even with the feeling that the club missed out on a chance to do something bigger this year, an extra game should be enough to prime the Whitecaps for 2022. There are no guarantees in MLS, something Sartini learned the hard way in Kansas City, but the second half of this year provided the seeds of hope in British Columbia.

Atlanta United will need more convincing that 2021 was salvaged by a single playoff game. For United, the nightmarish last couple of seasons have not only robbed the club of its place among the league’s elite, but it has also turned anything resembling success into bittersweet achievement.

On the one hand, Atlanta can feel good it salvaged its season with a playoff berth. The club finally landed on a coach who seems to fit the culture in Gonzalo Pineda and its talisman striker Josef Martinez is back on the field.

On the other, United never played up to its lofty ambitions or met the quality implied by its monetary investments in the roster. Flashes of effective play were typically followed by poor periods that eroded confidence. Atlanta reached the playoffs as the 5th-place team in the East, meaning it did better than the better minimum, but not by enough to earn a chance to play a playoff game at home.

That turned out to be the difference this season. Forced to go to the Bronx and face NYCFC at Yankee Stadium, Atlanta’s attack came up empty. Frankly, NYCFC is a better team. That result only reinforces that Atlanta’s climb back to the top still has a long way to go.

United re-signed general manager Carlos Bocanegra to a contract extension a week before the playoffs, a statement of faith in a key executive. It’s now up to Bocanegra to reward that faith and turn the 35th game of the season into one more on the way to a trophy.