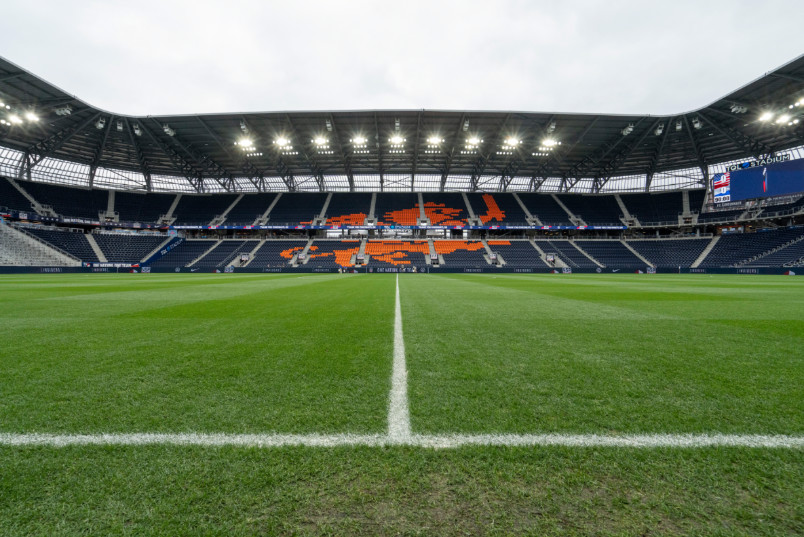 By Charles Boehm – WASHINGTON, DC (Nov 5, 2021) US Soccer Players – Compared to the USMNT’s breakneck pace of Concacaf Octagonal World Cup qualifiers so far, this month’s international window feels measured, even roomy. There are just two matches across the usual 10-day span instead of the three required in September and October, with a home base in Cincinnati, Ohio. Only one away trip, the relatively manageable flights to and from Kingston, Jamaica for next Tuesday’s duel with the Reggae Boyz.

A lighter schedule is probably for the best, given the mounting levels of wear and tear on players involved in this heavily compacted 2022 cycle. It also provides all of us with a better platform to appreciate the last USA vs Mexico qualifier as we know it.

If that sounds like a bold statement, consider how much this fixture, widely considered the biggest recurring event on the North American men’s calendar, has meant to all involved for the past three decades or more. Then look ahead to the dramatic changes to the World Cup looming on the horizon. Contemplate the knock-on effects to the rhythms and traditions that the United States and its Concacaf neighbors have crafted around the road to that tournament.

Canada, Mexico, and the US jointly will host a markedly expanded 2026 edition with 48 participating teams instead of the current 32. The trio will qualify automatically. Assuming FIFA doesn’t tinker even further, perhaps risky given the half-baked biennial World Cup concept they’re currently pitching to a skeptical public, 2030 will be the same size.

Concacaf is slated for six total berths in 2026. Even a heavy claw back when someone else hosts four years later would still likely grant at least four automatic slots and probably a few more via some form of intercontinental playoffs. That will make it significantly less difficult for the region’s biggest powers to book passage to the World Cup. The confederation will probably structure its format to ensure that its most lucrative match-up between its two biggest countries still takes place in qualifying. Yet, it may be difficult to summon the same enormous levels of intensity when both nations are something like shoo-ins.

So it’s not a huge reach to frame this showdown at TQL Stadium the last home qualifier of its kind against El Tri. The last one where a loss could mean not only dinged pride but real damage to the qualification campaign. Recall how the USMNT’s most recent “Dos a Cero” win in Columbus, in the 2013 Hexagonal, contributed to the tailspin that nearly denied Mexico a place in Brazil the following year, or the repercussions from the visitors’ 2-1 upset win there three years later.

USA vs Mexico games will always be special, always have meaning. Qualifiers still stand out, though, occasions crackling with anticipation that can define eras for both the teams and players who take part.

“Cincinnati with the new stadium, with increased capacity, we think it’s going to be a fantastic venue,” said Berhalter in a Thursday media availability just after his November roster was announced, making sure to salute the city’s soccer culture as well as the venue that FC Cincinnati unveiled earlier this year. “We think it’s going to be a great atmosphere. I’m already excited for this game, because it’s a big one.

“Regarding Mexico, I think it’s a very strong team, very mature team. They’re undefeated in qualifying this far,” he later added. “They’ve got a very talented attack and very good midfielders, so it’s going to be difficult game for us.”

Berhalter is 2-2 against Mexico since taking the helm three years ago. He lost his first two faceoffs with Gerardo “Tata” Martino, the 2019 Gold Cup final and a friendly at New Jersey’s MetLife Stadium a few weeks later. This year brought breakthroughs in both the Concacaf Nations League and Gold Cup finals, both dramatic extra-time victories. After using a range of tactical approaches in those, he’s now talking up an aggressive, up-tempo approach for the Cincy clash, a meeting of the Octagonal’s 1st and 2nd-place sides.

“This is a completely different animal,” said Berhalter. “Mexico’s in first place in the group. We’re trying to catch them.… We want to continue to be aggressive. We want to continue to push them, and see what comes. Continue to high press and make it uncomfortable for them. We’re OK with playing a fast game, it’s something that we have the athletes to be able do that and we want to put speed into the game.”

If it seems like the Jamaica game is taking a back seat, that’s both a reflection of the hype around USA vs Mexico and an allowance permitted by the schedule. Two matches instead of three means less need to rotate and manage minutes.

“We made a lot of decisions based on that,” said the coach. “It should be reasonable that if we’re happy with the performance of the players in the first game, that they can continue on and play the second game, we won’t need to rest them or rotate them…. We expect them to be able to play as much as as much as 180 minutes in two games.”

Conversely, the risk of caution accumulation hangs over three potential starters. Tyler Adams, Weston McKennie, and DeAndre Yedlin are carrying yellow cards. The next booking they receive will trigger a one-game suspension.

Having just made his first match appearance for Chelsea since the injury he sustained in the September window, Christian Pulisic is back in the squad. Berhalter cautioned that the attacker is well short of top fitness but may be tempted to push his minutes in light of his particular qualities.

“It’s luxury to have, to be able to bring a guy like Christian into camp, even though he’s not 90 minutes fit, to have him be able to make an impact in whichever way we choose,” said the coach. “For us, it’s about progressing him in a safe way. We know he’s valuable to the team. We know we want him on the field, but we’re also not willing to risk anything. It’s about how he feels and depending on that, will dictate what role he plays in these two games.”

The coaching staff’s decision to call in a relatively small group of strikers has drawn scrutiny. Many would consider Ricardo Pepi the only specialist #9 on this roster. Tim Weah is also an option at that spot, as is Pulisic in a pinch, and new arrival Jesus Ferreira tends to interpret the position as a false 9. Berhalter’s explanation gave another small window into his outlook.

TQL Stadium holds 26,000 spectators. With Friday’s match already sold out, it’s on track to be the biggest crowd for a home qualifier against El Tri since 1997. Participants and observers on both sides will hope that the first-ever World Cup qualifier in Cincinnati lives up to the moment as we all try to savor the last huge USA vs Mexico game of our current era.