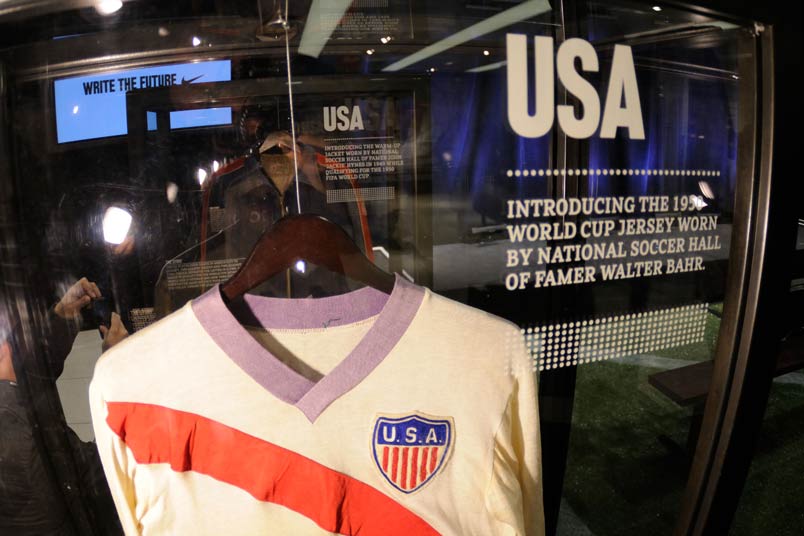 By Charles Boehm – WASHINGTON, DC (Dec 23, 2021) US Soccer Players – Altoona is so connected with the railroad that its minor league baseball team is named after the famous horseshoe curve in the tracks that allows trains to pass through the Alleghenies. As its railroad museum explains, the once vibrant downtown used to operate 24-7, the result of shift work that didn’t leave the train factories empty. Altoona was a driving force in industrializing America in the first half of the 20th century. That doesn’t make it all that surprising that it produced a key figure in soccer’s development in this country. That the connection continues into the 21st century is the story of a coaching lineage Jeffrey founded in Pennsylvania.

As an article in the Scottish soccer quarterly Nutmeg explained in-depth back in 2016, Jeffrey was the coach of the 1950 United States National Team. Getting the job late in the run-up to a lengthy trip to the World Cup, it was his tactics that shocked England in Belo Horizonte. The win didn’t advance the United States, but it made a major statement across the world. Almost 20 years after the collapse of the once-vibrant American Soccer League and a run to the semifinals of the first World Cup, a team representing the United States once again showed they could compete.

It was a fleeting success. The team barely played in the 1950s, trying again and again to put together a group to navigate whatever version of qualifying Concacaf put in place. It would take considerably longer than the gap between their last-place ranking in 1934 and the shock upset of England in 1950. Meanwhile, Jeffrey only coached the USMNT in Brazil, returning to the job that he had held since 1925 – head soccer coach at Penn State.

He left that job in 1953 with ten championships, a ridiculous undefeated run, and a reputation earned by building the best college soccer program of its time. It’s worth the context that Jeffrey was in charge during the Great Depression and World War II. It’s quite the story for someone who immigrated to the railroad town of Altoona and five years later was coaching college soccer.

Jeffrey was the model for looking to college coaches to find success with the national team, something that would show up again in 1990 when former University of Wisconsin-Milwaukee coach Bob Gansler led the USMNT at their next World Cup appearance. Jeffrey died in 1966 with his coaching lineage working its way back to Penn State.

By 1970, the captain of that 1950 USA team Walter Bahr would be the coach of Temple. He moved to Penn State in 1974, staying with the program through 1988. His assistant, Barry Gorman, would succeed him as coach, keeping the job through the 2009 season.

It’s back in Altoona where the connection to Jeffrey continues. One of Gorman’s youth team players, Fraser Kershaw, took the head coaching job at Penn State Altoona last January.

“I just think it’s the classic underdog that rose to the top,” Kershaw said of Jeffrey. His team plays a stone’s throw from where Jeffrey made his start in American soccer.

When Jeffrey retired from Penn State and handed the reins to his former player Ken Hosterman, it began a long succession of coaching knowledge that Kershaw is deeply proud to consider himself a part of.

“Now I’m stationed in Altoona and that’s where it all started, the immigrant from Scotland who started at the railroad. And our field is right next to the railroad,” he said. “So it’s like this 100-year circle.”

Kershaw is only one year into his time in charge of PSU Altoona. He’s excited to have led a very young team to the program’s first winning record in half a decade. It’s a small program in a quiet corner of the Allegheny Mountains. But he hopes to continue a tradition of achievement that dates back to that famous day in Belo Horizonte and what Jeffrey had already built in college soccer.

Jeffrey was inducted into the National Soccer Hall of Fame the year after he coached the United States at the World Cup and the founding of the original Hall of Fame. Several members of his 1950 squad would follow, including Bahr in 1976. Beating England became a touchstone moment for American soccer, the story turned into a book and later a movie in the 2000s. The original American Soccer League era eventually turned into the stuff of almost mythical teams like Bethleham Steel and the Fall River Marksmen. Meanwhile, Altoona saw an employee take on the role of factory team coach, take his chance at Penn State, and lead the United States at a World Cup.

While it’s easy to question the role of the college game in the modern era of developmental academies, it’s worth the reminder that college soccer helped build the game as we know it here. Its place in the sport’s history remains as important as the attempts to start professional teams, continuing to help build the game.