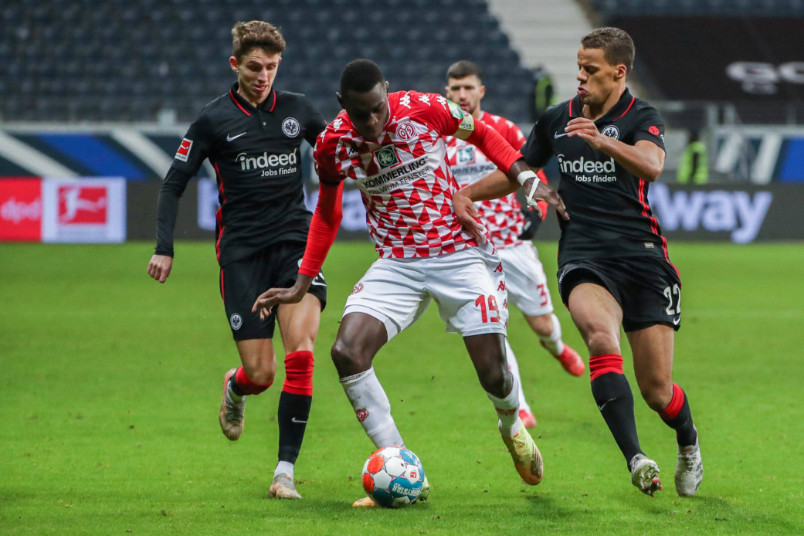 The roundup of USMNT players in Europe starts in the Bundesliga. Timmy Chandler’s Eintracht shutout Mainz 1-0 at home on a 34th minute Jesper Lindstrom goal. Terrence Boyd scored in Hallescher’s 4-1 loss at SV Meppen in the 3.Liga. Trailing from a 45th minute goal, Boyd converted a penalty in the 54th. Meppen added goals in the 66th, 67th, and 84th minutes.

“I’m really happy and pleased with the result and the performance,” Eintracht coach Oliver Glasner said. “It was a deserved win and a fantastic conclusion to a very good first half of the season. We’ve picked up a lot of points lately, our performance level has stabilized. We go into a well-earned Christmas break with great joy and pride in my players. All the players were always there for the team and for Eintracht Frankfurt. That was the real key.”

John Brooks’s Wolfsburg lost 4-0 at Bayern Munich. Bayern scored in the 7th, 57th, 59th, and 87th minutes. Tyler Adams subbed on in the 7th minute of RB Leipzig’s 2-0 home loss to Arminia Bielefeld. Arminia went ahead in the 57th, but a man down in the 70th. Arminia doubled its lead in the 75th minute. Adams entered for Emil Forsberg, who will miss a minimum of eight weeks due to a muscle injury in his left thigh.

“Our first half of the season has been sobering,” RB Leipzig defender Willi Orban said. “22 points is obviously not the total that we set out for or wanted. We have to analyse it all now. We’ve had a new coach for a week and a half who has introduced a few new things, but who still has a lot of work to do with us. We have to take a few days to recover, take responsibility and question ourselves whether we’ve played to our maximum.”

Christian Pulisic’s Chelsea drew 0-0 at Wolverhampton in the Premier League. Duane Holmes scored in Huddersfield Town’s 3-2 win at Bristol City in the Championship. Huddersfield fell behind in the 2nd minute. Holmes equalized in the 41st, Danel Sinani scored in the 46th, and Danny Ward made it 3-1 in the 55th. Bristol City scored again seven minutes into stoppage time. Lynden Gooch’s Sunderland drew 1-1 at Ipswich Town in League One. Falling behind in first-half stoppage time, Nathan Broadhead equalized for Sunderland in the 50th minute.

Jordan Pefok scoring four goals for Young Boys in their 5-0 win at Lugano in the Swiss Super League. Pefok scored in the 6th and 21st with Moahmed Ali Camera making it 3-0 in the 35th. Pefok added a 49th minute penalty and scored his fourth goal in the 61st.

Weston McKennie subbed out in the 72nd minute of Juventus’s 2-0 win at Bologna in Serie A. Alvaro Morata put Juve up in the 6th and Juan Cuadrado doubled the lead in the 69th. McKennie saw yellow in the 29th minute. Tanner Tessman and Gianluca Busio’s Venezia drew 1-1 at Sampdoria. Down a goal from the opening minute, Thomas Henry equalized in the 87th. Tessman subbed out in the 58th and Busio followed in the 69th.

Konrad De La Fuente subbed out in the 59th minute of Marseille’s 4-1 home win over Cannet Rocheville in the French Cup round of 64. Marseille fell behind in the 16th and went a man up in the 39th. Aradiusz Milik responded for Marseille with a 41st minute penalty and a 58th minute goal. Marseille added a goal from Luis Henrique in the 77th and Milik scored again in the 90th minute.

Erik Palmer-Brown’s Troyes exited 4-2 on penalties after drawing 1-1 at home with Nancy. Playing a man up from the 32nd, Brandon Domingues converted a Troyes penalty in the 44th. Nancy equalized in the 64th, seeing red in the 76th and again in stoppage time. Palmer-Brown saw yellow in the 37th. Nicholas Gioacchini subbed out in the 70th minute of Montpellier’s 1-0 win at Andrezieux. Teji Tedy Savanier converted a penalty in the 68th minute.

Luca De la Torre’s Heracles beat Groningen 4-2 in the Eredivisie. Down a goal from the 9th minute, Bilal Basacikoglu equalized in the 31st and Nikolai Laursen scored in the 34th. Groningen equalized in the 78th, but Orestis Kiomourtzoglou put Heracles up for good in the 87th and an own goal finished off the scoring in the 89th.

Reggie Cannon’s Boavista beat Moreirense 1-0 at home in the Primeira Liga. Yanis Hamache scored Boavista’s goal in the 34th. They finished a man down with a red card to Nathan Santos in stoppage time. Mark McKenzie’s KRC Genk drew 1-1 at home with Royal Antwerp in the Belgian Pro League. Paul Onuachu scored for Genk in the 32nd and Viktor Fischer equalized for Antwerp in the 82nd.

Cameron Carter-Vickers’s Celtic beat Hibernian 2-1 away in the League Cup. Down in the 51st, Celtic’s Kyogo Furuhashi equalized in the 52nd and scored again in the 72nd.

Tyler Boyd subbed out in the 74th minute of Rizespor’s 1-0 home win over Yeni Malatyaspor in the Super Lig. Deniz Hummet scored in the 80th minute. DeAndre Yedlin subbed out in the 66th minute of Galatasaray’s 1-1 home draw with Basaksehir. Down a goal from the 20th, Mostafa Mohamed equalized for Galatasaray in the 87th. Galatasaray went a man up five minutes into stoppage time. Yedlin saw yellow in the 30th minute.

Mix Diskerud’s Omonia lost 2-1 at Doxa in Cyprus. Trailing from the 11th minute, Marinos Tzionis equalized in the 26th. Doxa went ahead for good from a 49th minute penalty. Diskerud saw yellow in the 55th minute.