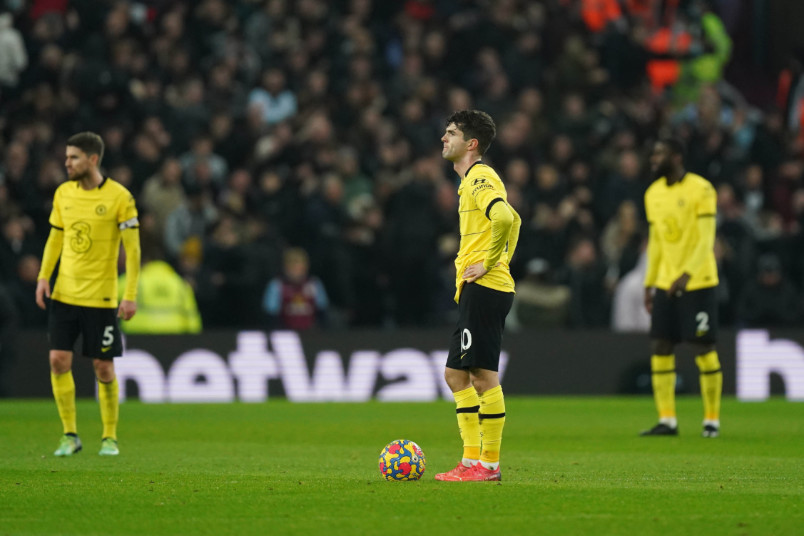 Monday’s soccer news starts with the Premier League results. Christian Pulisic’s Chelsea came back to win 3-1 at Aston Villa. Trailing from a 28th minute own-goal, Chelsea’s Jorginho converted a 34th minute penalty. Romelu Lukaku put them up for good in the 56th and Jorginho converted another penalty three minutes into stoppage time.

“It was a very big win,” Chelsea manager Thomas Tuchel said. “The boys are super tired. The effort was huge. We had a bit of a rough start. We were not sharp enough. I had the feeling we tried to get away with skillful play, but there was a last percent missing in sharpness and in intensive effort. Still, we did not allow them too much. But then we go behind with an own goal and a very unlucky goal, but the reaction was good in first-half and second-half, even better.”

Josh Sargent subbed out in the 72nd minute of Norwich City’s 5-0 home loss to Arsenal. The goals came in the 6th, 44th, 67th, an 84th minute penalty, and stoppage time. Norwich is at the bottom of the Premier League table, tied with 19th-place Newcastle on ten points from 18 games.

“I’m bitterly disappointed,” Norwich head coach Dean Smith said. “My overriding emotion is anger to be honest, because I haven’t seen that coming over the last week, we’ve trained okay. I know players have come onto the training pitch at different times because of illness or injury but that was too many unforced errors.”

Zack Steffen was on the bench for Manchester City’s 6-3 home win over Leicester City. Kevin De Bruyne had City up in the 5th minute and Riyad Mahrez doubled the lead from the penalty spot in the 14th. Ilkay Gundogan made it 3-0 in the 21st and Raheem Sterling converted a penalty in the 25th. Leicester City responded in the second-half with goals in the 55th, 59th, and 65th. Aymeric Laporte scored for Manchester City in the 69th and Sterling closed out the goals in the 87th minute.

Ethan Horvath was on the bench for Nottingham Forest’s 2-0 loss at Middlesbrough. An own-goal put Boro up in the 17th, scoring again in the 69th minute. Duane Holmes subbed out in the 79th minute of Huddersfield Town’s 3-2 home win over Blackpool in the Championship. Down a goal from the opening minute, Huddersfield’s Danny Ward equalized in the 3rd. Blackpool got its lead back in the 18th, going a man down in the 61st. Huddersfield responded with goals from Sorba Thomas in the 80th and 84th minutes. Holmes saw yellow just before exiting the game.

Lynden Gooch’s Sunderland shutout Doncaster 3-0 away in League One. Ross Stewart converted a 7th minute penalty and Elliot John Embleton scored in the 41st. Doncaster gave up an own-goal in the 50th minute.

In the Scottish Premiership, Christian Ramirez’s Aberdeen beat Dundee 2-1 at home. Trailing from the 7th, Ryan Hedges equalized for Aberdeen in the 12th and Lewis Ferguson scored in the 70th minute. Cameron Carter-Vickers’s Celtic beat St Johnstone 3-1 away. Liel Abada put Celtic up in the 9th and scored again in the 22nd. St Johnstone pulled a goal back in the 69th, but Nir Bitton scored Celtic’s third goal in the 82nd minute.

The Independent’s Miguel Delaney looks back at the year that was in European soccer. SI’s Brian Straus does the same for the United States. The Guardian’s Jonathan Liew with the importance of the fan response to The Super League.

Premier League on NBCSN: Southampton vs Spurs at 10am and Leicester City vs Liverpool at 3pm ET.