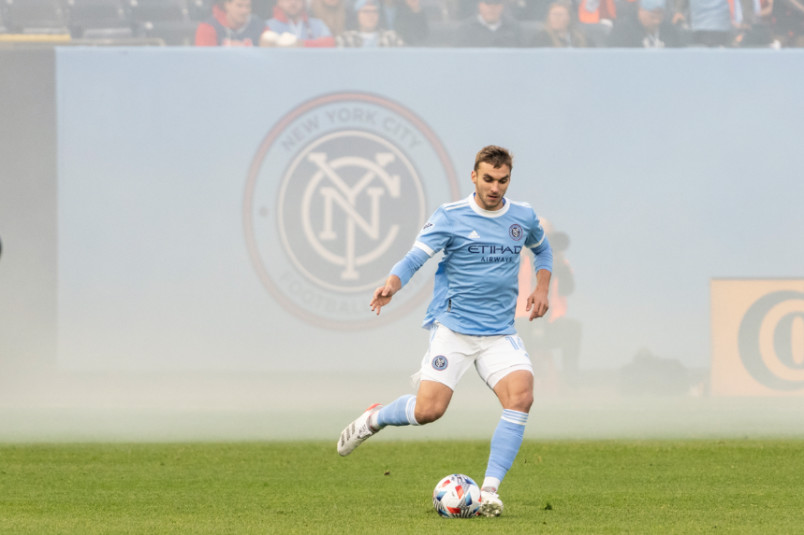 By Charles Boehm – WASHINGTON, DC (Dec 9, 2021) US Soccer Players – The Philadelphia Union had nearly pulled off an improbable victory over New York City FC in Sunday’s Eastern Conference Final at Subaru Park. Despite the absence of a starting XI’s worth of players due to a COVID-19 outbreak, a packed crowd was roaring their shorthanded team on towards a place in the MLS Cup final. Then a late error handed the visitors from Gotham a 2-1 comeback win. 2nd-seed Philadelphia’s season ended while 4th-seed NYCFC gets a shot at its first title.

It’s an interesting situation for NYCFC this season. The team revamped after last year’s 5th-place finish and first round playoff exit. Ronny Deila joined as coach in January from Valerenga in Norway’s Eliteserien and player moves followed. Once again for New York, the big question was about its approach.

Even in a centralized, salary-budgeted, parity-obsessed league like MLS, there are haves and have-nots. And NYCFC most definitely falls into the haves category. Their owners are City Football Group, the multinational conglomerate that owns and operates a large and growing suite of clubs around the world with Manchester City at its center, fueled by the enormous financial power of Abu Dhabi’s royal family.

Now that they’ve reached MLS Cup in their seventh season of existence, it’s worth asking whether NYCFC is finally mobilizing all those advantages towards a lasting place in the league’s elite. That’s a prospect that could reconfigure the power structure at and near the top of the Eastern Conference.

That said, it would be unfair to Deila and his players and staff to attribute their impressive run to this year’s championship game to potential spending power. The Cityzens have been skillful, assertive, and resilient to reach this point. Having implemented a possession-oriented identity comparable to their parent club in England early in their existence, they’ve stuck to that across their last three head coaches. The approach is finally reaping the rewards in the postseason.

NYCFC was one of the most proactive teams in MLS this season, averaging 27.5 touches per match in their opponents’ penalty box, second-best in the league behind LAFC. They’ve generally managed to grow younger and better over the years, becoming annual playoff participants.

Leaning on City Football Group’s unparalleled global scouting infrastructure, NYC has brought in young talents from around the globe, many of them on loans or other arrangements with sibling clubs abroad. The likes of Valentin Castellanos, Santi Rodriguez, Talles Magno, and Thiago Andrade have shown the ability to contribute quickly at MLS level while also offering long-term value on the transfer market.

Even within MLS’s financial constraints, City can deploy their wealth via optional spending mechanisms like Designated Players, Targeted Allocation Money signings, and the new Under-22 initiative. They now do so mainly via investments like these instead of high wages for aging big names. These are the most obvious tangible benefits of membership in the City Football Group, but someone still has to dig out results on the pitch.

It’s a credit to Deila and his staff that this season they overcame serious injuries to key starters Heber, Keaton Parks, and Anton Tinnerholm while working in new arrivals like Rodriguez, Magno, and Andrade. Despite an early-fall lull marked by two losses to their crosstown rivals the Red Bulls, City finished the regular season on a 3-0-2 run that they’ve extended into the playoffs.

Several rounds of postseason failure from 2016-20 have given way to this year’s impressive run, with wins over Atlanta, Supporters’ Shield winners New England and then Philly. A club that previously failed to convert their often-superior talent into playoff victories has now found a formula that works in the clutch.

“We’ve been very successful in coming to the playoffs six times in a row,” said Deila on Sunday. “We haven’t dealt with the pressure before and now we’re starting to do that. I think the learning, from the whole club, to win football games and how to deal with that and how to win them when the pressure is on; that’s something you have to learn over time. And this club has gone through a lot already at a young age.”

It’s significant that we’ve gotten this far before arriving at the topic of NYCFC’s home stadium. Criticism and mockery of their awkward Bronx cohabitation with the New York Yankees tends to dominate the discourse around the club. Beyond the snug dimensions of their pitch, which they’ve grown quite comfortable with in terms of home-field advantage, it did affect their past two seasons in significant ways. They’ve had to play several home games at Red Bull Arena and Citi Field due to scheduling conflicts with baseball, a less than optimal scenario for their players, staff, and fans.

At this point, though, the rest of MLS may want to give thanks for that situation. A soccer-specific home of their own might just be the last piece in the puzzle for their climb towards Goliath status. Should that box eventually be checked, the Cityzens have every reason to aim for that level. Winning this weekend can only speed that further along.