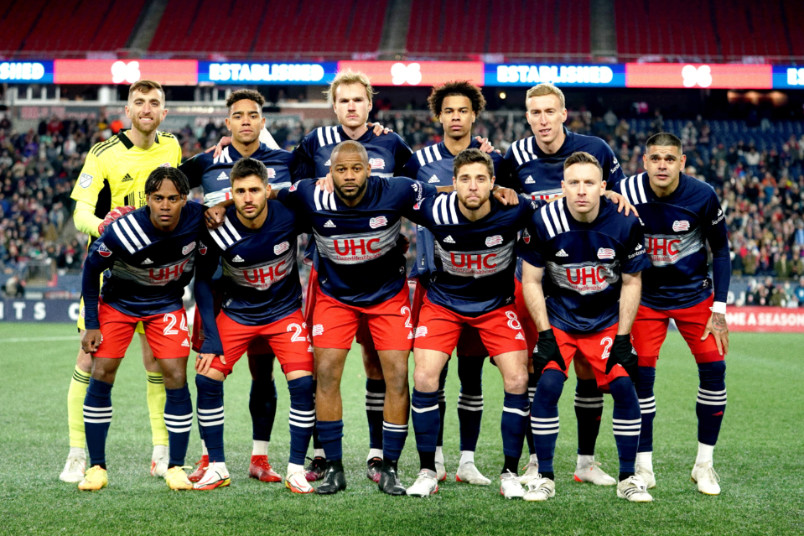 By Charles Boehm – WASHINGTON, DC (Dec 2, 2021) US Soccer Players – On one level, Bruce Arena’s words made sense. On another, they were bewildering. “We don’t have the best roster in the league. It’s got to get a little bit better, for sure,” said the veteran coach after his New England Revolution fell to New York City FC on penalties in Tuesday night’s MLS Eastern Conference Semifinal match at Gillette Stadium. “But I think if you look at the year on the whole, it was a really good year.”

The Revs dominated MLS in 2021. Accruing points at a 2.15 per game clip, they finished 12 points ahead of their nearest pursuer in the overall league table, winning the Supporters’ Shield with two weeks to spare. They would finish with 73 points, setting a new league points record and earning Arena the Coach of the Year award for the fourth time, another MLS record.

The foundation of all that winning was New England’s three Designated Players, strikers Gustavo Bou and Adam Buksa and playmaker Carles Gil, a front runner for the league MVP award. The trio combined for 66 goals and assists in the regular season, far and away the most production among MLS designated players, with Sporting Kansas City’s in a distant second place with 47. The Revs’ DPs reportedly cost the club upwards of $13 million in transfer fees. Their annual salaries add up to more than $6.2 million in guaranteed compensation according to the MLS Players Association database.

The rest of the squad was pretty darn good, too. Matt Turner won MLS Goalkeeper of the Year honors and earned several huge starts for the USMNT. Tajon Buchanan scored eight goals and five assists and became a Canadian national team mainstay, showing why Belgium’s Club Brugge is paying a $7 million fee to acquire him this winter. A litany of other Revs produced career years, or close to it. Turner, Buchanan, Bou, and Gil all made the MLS Best XI.

So how on earth could this not be considered “the best roster in the league” by a safe margin? The short answer is that NYCFC goalkeeper Sean Johnson saved Buksa’s spot kick after 120 minutes of deadlock, and all the other shootout takers made theirs.

“Certainly, we would’ve liked to have won the MLS Cup, but those things happen when you get into the postseason with single elimination,” continued Arena. “Then you go to penalties. You position yourself for that, it’s a crapshoot. Anyone can win.”

Those last six words might be the most efficient encapsulation of the MLS playoffs. The unpredictability can be thrilling. It probably elevates the postseason in terms of pure entertainment and drama. It certainly gives teams across the league hope that they can achieve great things if they just qualify, whatever lows they hit in the six-plus months leading up to it.

Then again, you might have a problem when your format for crowning your champion shares a motto with the lottery.

“This kind of group, having the season we did, it doesn’t always replicate in the playoffs,” said Revs midfielder Matt Polster post game. “It’s difficult, it’s not the same type of games. We knew that, but that’s just a disappointing result. We had expectations of going the whole way and winning MLS Cup. Tonight just wasn’t our night.”

On the other side of the spectrum, we have Real Salt Lake.

A .500 team in the regular season, RSL finished 25 points back of the Revs in the Shield standings. It took a 95th-minute goal from Damir Kreilach in an upset of Sporting KC on the final day of the season to squeeze them into the West’s final playoff berth. Even the, they needed the total-wins tiebreaker to nose ahead of the LA Galaxy. Simply finishing in the top seven was a laudable milestone for a club mired in a long-running search for new ownership that has hampered their competitiveness.

Yet here they are, 90 minutes away from the championship final, thanks to upset road wins over the Seattle Sounders and Sporting KC. RSL lost 6-1 to the Portland Timbers on a September visit to Providence Park. This weekend, just one goal there might be enough to put them in MLS Cup.

Granted, theirs is a compelling Cinderella story. Pablo Mastroeni, the coach leading it, is only an interim boss for now. He stepped in for Freddy Juarez at mid-season after Juarez left for an assistant’s job with Seattle. All in all, it’s a walking embodiment of the second chance that postseason qualification represents. The “different beast,” in the words of players and coaches around the league

As inspiring as that may be, it remains jarring that RSL is still playing and the Revs are done because of three results at the tail end of a 34-game season in which Salt Lake lost nearly three times as often as New England. The 2019 shift from two-legged playoff series to single-game rounds was supposed to better reward regular-season achievement. That, by definition, would suggest that a least a portion of the league’s leadership have significant reservations with what the playoffs tend to highlight.

As central as we perceive playoffs to be to North American professional team sports, none of Europe’s “big five” leagues use them to crown their champions, of course. Meanwhile, in the 26-year history of MLS, just seven of the regular-season champions went on to lift that year’s MLS Cup. Only eight even made it to the final.

Yes, the Colorado vs Portland playoff game on Thanksgiving drew one of the highest TV ratings in MLS history. That can only help as Major League Soccer negotiates its next TV deal. Still, that bigger question remains as glaring as ever. What are the playoffs really rewarding if it isn’t what happens over all of those regular season games?