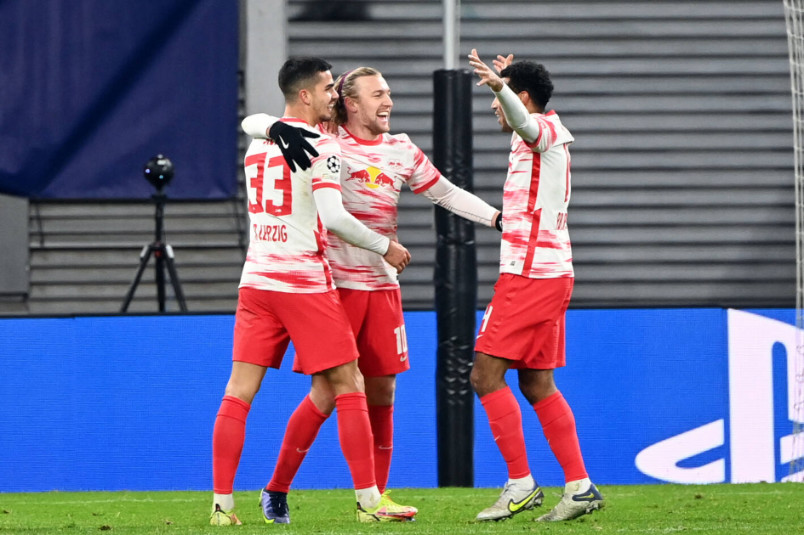 Wednesday’s soccer news starts with the results from group A in the Champions League. Tyler Adams subbed on in the 63rd minute in RB Leipzig’s 2-1 home win over Manchester City. Dominik Szoboszlai scored for Leipzig in the 24th and Andrew Silva doubled the lead in the 71st. Riyad Mahrez pulled a goal back for Manchester City in the 76th, going a man down in the 82nd with a red card to Kyle Walker. Zack Steffen was in goal for City. Adams saw yellow in stoppage time.

“We were extremely disciplined, tactically,” Achim Beierlorzer. “One player worked for the next and we have shown that the team can act well both with and without the ball. The next three Bundesliga games are now extremely important.”

Owen Otasowie was on the bench for Club Brugge’s 4-1 loss at PSG. Trailing 3-0 from goals in the 2nd, 7th, and 38th, Mats Rits scored for Club Brugge in the 68th minute. PSG converted a 76th minute penalty. Manchester City won group A with PSG finishing 2nd. RB Leipzig finished 3rd and transfers to the Europa League. Club Brugge exits the tournament in 4th-place.

“We definitely wanted to make something of it in the second-half,” Rits said. “I had the feeling after a few minutes that there might even be something possible if we scored quickly, but the goal came too late. Of course it’s nice to score, but I would rather have picked something up. We have to remember that our reaction in the second-half was good, but we concede goals too easily.”

Gio Reyna wasn’t in the squad for Borussia Dortmund’s 5-0 home win over Besiktas. Donyell Malen opened the scoring in the 29th. Playing a man up from the 43rd, Marco Reus scored in first-half stoppage time and added a goal in the 53rd. Erling Haaland made it 4-0 in the 68th, scoring again in the 81st minute.

“We were well in the game from the beginning, were serious off the ball and tidy with it,” Borussia Dortmund coach Marco Rose said. “Overall, we have bowed out of the Champions League in a respectable manner. We were in a top position after the opening two games. Then came the Ajax double-header. The Champions League campaign did not pan out ideally for us. We have missed out on our objective. Nonetheless, it was important for us to put in another good performance today. We managed that.”

Moving to League One, Lynden Gooch’s Sunderland lost 5-0 at home to Morecambe. Ross Stewart opened the scoring in the 13th and Nathan Broadhead doubled the lead in the 17th. Alex Pritchard made it 3-0 in the 56th and Broadhead scored again in the 68th. Leon Dajaku finished off the scoring in the 87th minute.

Also in the soccer news, New England’s Carles Gil won the 2021 MLS MVP award. “It is an honor for me to be named the MLS Most Valuable Player,” Gil said in a press statement. “I want to thank everyone who voted for me, everyone who works at the club, our coaching staff, our fans, and especially my teammates. Together, we achieved an unforgettable regular season.”

Europa League on Galavision: Real Sociedad vs PSV at 12:45pm and Celtic vs Real Betis at 3pm. UniMas has Napoli vs Leicester City at 12:45pm and Lazio vs Galatasaray at 3pm. Liga MX on Univision: Leon vs Atlas at 10pm ET.