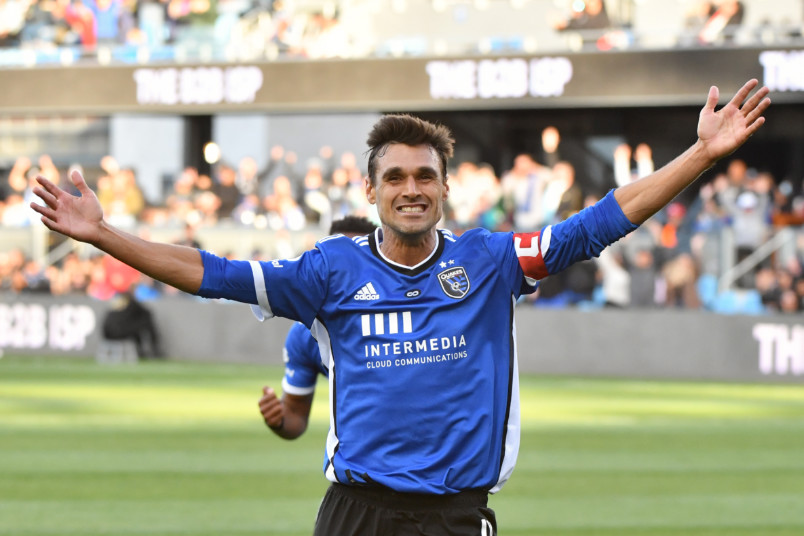 By Clemente Lisi – NEW YORK, NY (Dec 20, 2021) US Soccer Players – Decision Day was the end of the line for the 14 teams not moving onto the playoffs. With that, several MLS stars brought their careers to an end. In the case of the San Jose Earthquakes, there was nothing to play for at PayPal Park. Instead, the crowd was there to see star striker Chris Wondolowski score the final goal of his pro career in a 1-1 draw against DC Dallas.

After the game, Wondolowski grabbed the microphone, walked over to the center circle and officially announced his retirement after 17 MLS seasons. Wondolowski will be missed. MLS prides itself for developing players and highlighting young stars both from the US and Canada as well as abroad. Nonetheless, veterans like Wondolowski have been fun to watch and contributed immensely for years to the league’s growth.

“It’s been an amazing ride. I can’t thank you guys enough,” he told the crowd that afternoon. “It starts with my teammates and literally the league. These guys have been there, in the locker room, practices, and the battles.”

The 38-year-old Wondolowski is one of a list of players who decided to hang up their cleats in 2021. The group includes Wondolowki’s former US teammate Matt Besler and Federico Higuain. These retirements mark the end of an era for a league that continues to churn out talent. In the case of Wondolowski and Besler, it’s a reminder of the importance of MLS as a developer of American talent that continues to be important to the success of the National Team.

Wondo finished his MLS career with 171 regular season goals, more than any player in league history. The California native built a great career from humble beginnings, selected 89th of 96 college players drafted in 2005. After leading the Quakes Reserve League side in scoring with eight goals, Wondolowski went to Houston as part of the team’s relocation in 2006. While he was part of the Dynamo squad that won MLS Cup that year and again in 2007, he wasn’t a regular.

Returning to San Jose in 2009, Wondolowski broke through in 2010 and became a scoring machine over the next decade. As a result, he was called up to play for the National Team in 2011 and took part in the 2014 World Cup in Brazil. Wondolowski moved to the Quakes front office as an assistant to the general manager, his old teammate Chris Leitch. It will be Wondo’s unquestioned love for the game that fans will miss seeing on the field.

“I enjoy going out there every day. Any time you can play in a game, it doesn’t matter if it’s for the National Team or San Jose, it’s fun,” he told USSoccerPlayers.com in 2015. “There is no pressure. It’s just a matter of going out there and doing your thing.”

While in Brazil, Wondolowski was on the same 23-man roster that included Besler. The standout defender announced his retirement after 13 MLS seasons, most of them with Sporting Kansas City. The 34-year-old Besler signed on as a free agent with Austin FC at the start of the 2021 season after Sporting KC opted not to renew his contract. He won an MLS Cup with Sporting KC in 2013. Besler, who missed the last two months of the season due to injury, penned a letter to fans thanking them for their support.

“Although my time in Austin was short, I want to take a moment to express my gratitude,” he wrote. “I truly enjoyed the experience of wearing the Verde and Black and representing this organization to the best of my ability.”

Besler, who faced Wondolowski many times in league play, told USSoccerPlayers in 2016 that he feared no striker. “I have respect for every opponent and realize some opponents present a big challenge,” he said at the time. “But if you go into a game fearing someone, you don’t give yourself much of a chance.”

The third big name to retire is Higuain. Before it became trendy for MLS teams to sign South American talent, Higuain joined Columbus Crew SC in 2012. The Argentine-born attacking midfielder, the type of talent who could have excelled in Europe, made Columbus his home.
Higuain signed with DC United in 2020, moving to Inter Miami, where he played alongside his brother Gonzalo. He finished his MLS career with 55 goals and 63 assists in 193 regular season matches.

“I would love to play for my entire life,” he told reporters during an October 29 news conference. “But this is how football is, this is how life is. Everything has an end.”