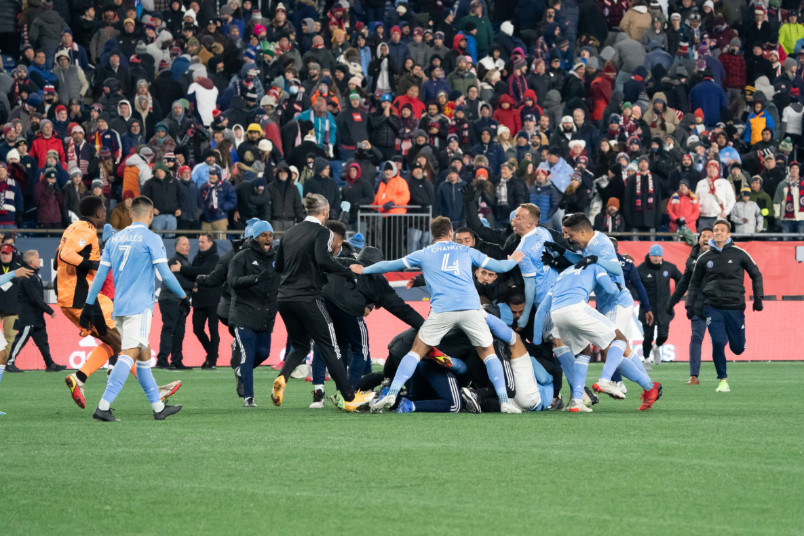 The New England Revolution exited the playoffs 5-3 on penalties to NYCFC after drawing 2-2, joining Colorado as the top seeds that didn’t advance from the conference semifinals. 4th-seed NYCFC becomes the only lower seed to win a game so far in the Eastern Conference bracket.

“What we said internally was that no matter what happens, we stick together, we keep going,” NYCFC goalkeeper Sean Johnson said. “That’s a class example of that tonight. Giving up the second goal in extra time, coming into the penalty shootout. Historically, penalty shootouts haven’t been our thing, but we said ‘let’s make this our moment, let’s embrace it, let’s enjoy it.’ Yeah, everybody stepped up in a big way.”

The action started early at Gillette Stadium. Santiago Rodriguez put NYCFC up in the 3rd minute. Adam Buksa equalized in the 9th, with that 1-1 score holding through regulation. Valentin Castellanos returned New York’s lead in the 109th, seeing red in the 113th. New England’s Tajon Buchanan sent the game to penalties with a 118th minute equalizer. New England failed to convert in the second round of penalties while NYCFC went five for five from the spot.

“We had a very good year, and you could argue that maybe we played a little bit in over our heads,” Arena said. “I think it was a good year. We don’t have the best roster in the league. It’s got to get a little bit better, for sure. But I think, if you look at the year on the whole, it was a really good year. Certainly, we would’ve liked to have won the MLS Cup, but you know, those things happen when you get into the postseason with single elimination. Then you go to penalties, and you position yourself for that, it’s a crapshoot. Anyone can win. And give New York City credit for winning the shootout.”

Moving to the scores from Europe, Josh Sargent subbed out in the 67th minute of Norwich City’s 1-1 draw at Newcastle United in the Premier League. Plying a man down from the 9th minute, Newcastle converted a 61st minute penalty. Norwich’s Teemu Pukki equalized in the 79th. Matt Miazga’s Alaves beat Unami 3-0 away in the Copa del Rey. John Guidetti opened the scoring in the 66th and Mamadou Sylla doubled the lead in the 82nd. Luis Rioja finished off the scoring a minute into stoppage time.

In Serie A, Tanner Tessman and Gianluca Busio’s Venezia lost 4-0 at Atalanta. The goals came in the 7th, 12th, 57th, and 67th minutes. Busio subbed out in the 58th. A league down, Andrija Novakovich subbed on in the 73rd minute of Frosinone’s 1-1 draw at Cremonese. Trailing from the 55th, Gabriel Charpentier equalized for Frosinone in the 58th minute.

FOX scored the most-watched @MLS match since 2004 with its Thanksgiving Day playoff match featuring the @TimbersFC and @ColoradoRapids ⚽️🦃 pic.twitter.com/AS4MEQVBG9