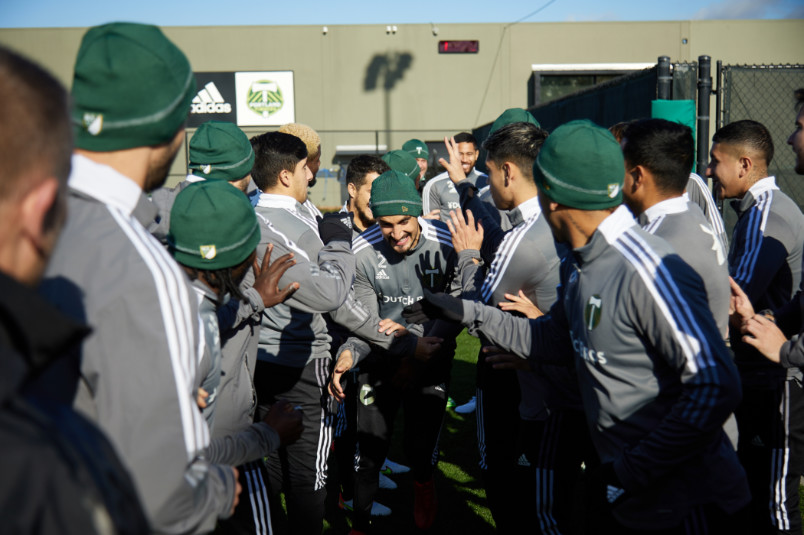 By Luis Bueno – RIVERSIDE, CA (Dec 8, 2021) US Soccer Players – The city of Portland has several nicknames. The Rose City, Rip City, Stumptown, and PDX pay homage to some portion of the city’s history and culture. None of those nicknames are going anywhere. For instance, the Rose City nickname is not contingent upon the number of roses that bloom in and around Portland at any one time. But there is one self-proclaimed moniker that the team might want to try and protect or, at least, back up with performances on the field. Soccer City USA.

Portland laid claim to that nickname decades ago. That doesn’t mean that it’s necessarily theirs to keep. In recent years it’s been somewhat contested, most notably from their Cascadia neighbors to the north. Not only has Seattle become a hotbed of soccer, but it’s a successful hotbed of soccer. Seattle has won two MLS Cups in the last six seasons. They’ve also got four US Open Cups in the trophy cabinet, one off the all-time lead.

What Portland has now is a berth in MLS Cup 2021. They’ll host New York City FC on Saturday. Both entrants entered these playoffs as the 4th-seed in their respective conferences. Now, they’re the last teams standing.

Keeping up with Seattle is part of the bigger game for Portland. The Sounders model resonates across MLS even in a season where 1st-place slipped away before making an early playoff exit. It’s a question of success and prestige, something that casts Portland in the shadow of the bigger club, in the bigger stadium, in the bigger town.

Right now, Portland has the chance to double down on its nickname and try to become the focal point of soccer if not in the country then in the Pacific Northwest. A win and Portland would equal Seattle in the number of MLS Cups won. Seattle has two, of course, but it took Portland five seasons to win MLS Cup while Seattle won it in its eighth season. A win here and Portland would equal Seattle with two MLS Cup wins in its first 11 seasons.

For Portland, it’s also continuing the legacy that got them the Soccer City USA moniker in the first place. It’s that long history of caring about teams called the Timbers going back to the original era of the North American Soccer League in the 1970s. Joining MLS in 2011, The Timbers were one of a handful of teams that carried their tradition with it into an expansion season. That also applies to Seattle, further complicating matters. Portland made the distinction clear, however.

Back in 2010, to proclaim its impending arrival in MLS, the club took out a billboard near the Sounders’ home stadium. It read simply “Portland, Oregon Soccer City USA 2011” and featured the Timbers’ ax logo taking up a third of the billboard.

Like so many expansion franchises do, Portland fell flat on its face in 2011 but full credit for trying. Over time the Timbers developed and became competitive and eventually helped its city grow into the nickname. Alongside a rabid fan base, a unique culture that features a lumberjack with a chainsaw, tifo, chants, and the confirmation that soccer in the city is special. The Portland Thorns NWSL team also helps since a true Soccer City USA can’t be one without that kind of presence.

Success on the field has to be part of it as well. Without a winning team on the field, the interest off the field wanes. It would be hard to take Soccer City USA seriously if the team that represented it was perennially in last place.

Portland’s chance to lay claim to an MLS title was always strong this year as the team came in with a talented roster, but age is catching up with key players. If this is the last run for this version of the Timbers, capping it with a trophy only highlights the quality of this squad. Regardless, a revamp may be necessary.

Sebastian Blanco (33), Diego Valeri (35), and Diego Chara (35) have carried the Timbers for many years, but the club must either find within its roster or bring in more talent. In Soccer City USA, that means more than goals, assists, and clutch plays. It also includes their presence in the community.

Felipe Mora (11) and Dairon Asprilla (10) lead the team in goals. Meanwhile, Diego’s younger brother Yimmy and Blanco are tied for the team lead in assists with seven. The cupboard is certainly not bare in Portland. Success might follow Portland in 2022 and beyond because of the strength of that roster. That includes competing with Seattle across the regular season.

The unofficial title of Soccer City USA already belongs to Portland. Lifting an MLS Cup in front of its citizens would certainly help keep it that way.