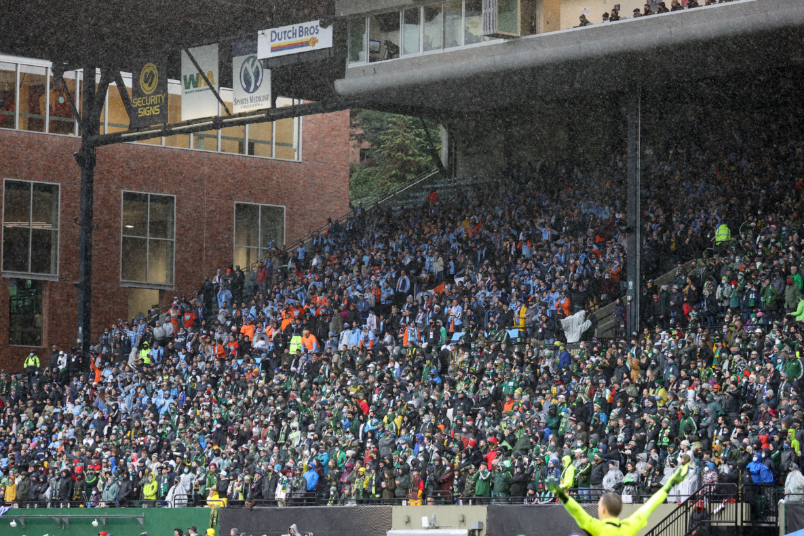 By Clemente Lisi – NEW YORK, NY (Dec 13, 2021) US Soccer Players – The 2021 MLS season has been quite a ride. A year after a pandemic delayed season, it came back strong in difficult circumstances. It had it all: close games, last-gasp goals, and plenty of upsets. In fact, it’s the continued unpredictable nature of MLS that many use as a criticism. Instead, it’s what many of us think remains one of its biggest assets.

In weather typical of the Pacific Northwest, New York City FC stunned the Portland Timbers on Saturday to win MLS Cup under very wet conditions. The game ended 1-1 in regulation, eventually settled 4-2 via a shootout thanks to the heroics of NYCFC goalkeeper Sean Johnson.

“It feels unbelievable to be able to call ourselves champions,” Johnson told MLSSoccer.com. “What a ride so far, this journey was crazy this year, so many ups, so many downs and we talked amongst ourselves before the game and said it’s a massive opportunity to make it all worth it.”

NYCFC’s title finally means that MLS has a champion from New York after 26 years of the MetroStars/Red Bulls coming up short. What that means going forward is an open question in a league dominated by parity. Things can and do change year-to-year in MLS, another one of the league’s talking points.

With the season over, here are five things we learned in 2021.

Former USMNT coach Bruce Arena is both a legend and a Hall of Famer. He also remains one of the best coaches in MLS, both past and present. What he was able to accomplish with the New England Revolution this past season underlined that, even though they went one-and-done in the playoffs. Arena guided the Revs to the Supporters’ Shield, setting a points record in the process, and moved into 2nd-place all time on the list of regular season wins with 218. In doing so, he solidified his case for being the best American coach in history.

Yes, the Revs exited the playoffs early, but that says more about the postseason format than it does the team or Arena’s coaching. And yes, Arena is old school. He doesn’t rely on analytics. He believes in grit and hard work. The 70-year-old Arena has already been part of two MLS dynasties, DC United in the late 1990s and the Los Angeles Galaxy in the mid-2010s, and this year proved he can still get lots out of his players.

Salt Lake was for real

For those of you out there who love upsets, you need to look no further than Real Salt Lake. The team coached by former USMNT midfielder Pablo Mastroeni went on a brilliant playoff run after finishing 7th in the very competitive Western Conference during the regular season. RSL goalkeeper David Ochoa also showed he is one of the best in the league in addition to providing story lines for reporters and fans with his willingness to smack-talk opponents and pump up his side.

Mastroeni, coaching on an interim basis, encapsulated RSL’s Cinderella run after losing to the Timbers in the Western Conference Finals: “Nobody gave us a shot when this season started and nobody gave us a shot when the playoffs started either. To have the mental toughness to overcome the perception of who we are is fantastic. You can always look at things from either perspective, but I couldn’t be more proud of the effort and the commitment of this group that I was able to lead.”

The emergence of Ricardo Pepi

MLS has become a wonderful place to foster young talent. As a result, many players have made the jump from MLS to Europe over the past few years like Tim Ream, Tyler Adams, and recently Gianluca Busio. The standout young player in the league this season was, without a doubt, FC Dallas striker Ricardo Pepi.

The numbers don’t lie. The Texas-born player, who will turn 19 next month, scored 13 goals in 31 games this season. In addition, the FC Dallas Academy product became a regular on the National Team and integral in the USA’s quest to qualify for next year’s World Cup in Qatar. Pepi, who has three goals in six games for the USMNT, could someday end up abroad. For now, he’s tearing it up in MLS and it’s been fun to watch.

Slowly coming out of the pandemic

Nearly two years into the global fight against COVID-19, MLS was able to return to some normalcy this season after league-wide revenues were reportedly down close to $1 billion in 2020. Fans were back in the stands across North America, Canadian teams were able to finally play at home again, and even the All-Star Game made a comeback.

It’s not to say that the league is back to normal. The Philadelphia Union lost six starters in their Eastern Conference Finals game against NYCFC due to a COVID outbreak. That changed the scope of that game, calling into question even playing it with one team so noticeably impacted.
The league has done a wonderful job working around the pandemic, but it’s an ongoing issue.

Thanksgiving is a day for turkey, family, and maybe MLS. The league got a ratings win with an NFL game as the lead-in, showing what it can do on network TV on a holiday afternoon. Colorado hosting the Timbers on Fox, drew 1.85 million viewers. That put the game, excluding MLS Cup Finals and All-Star Games, second to Freddy Adu’s 2004 debut with DC United. It can’t happen again next season due to the World Cup, but it shows what MLS may be capable of as a television draw.

“As you know, our media rights will expire at the end of the 2022 season,” MLS Commissioner Don Garber told reporters last week. “We have been out in the market with an unprecedented package of rights that include every MLS game, whether it be local, national, international, out-of-market, linear or streaming. There will be more details to come, and I have every expectation that our new media rights agreements will be finalized during the first quarter of 2022.”

Overall, MLS was able to use 2021 to transition back to normalcy, giving fans both an exciting product as well as proof the game continues to steadily grow in this country.