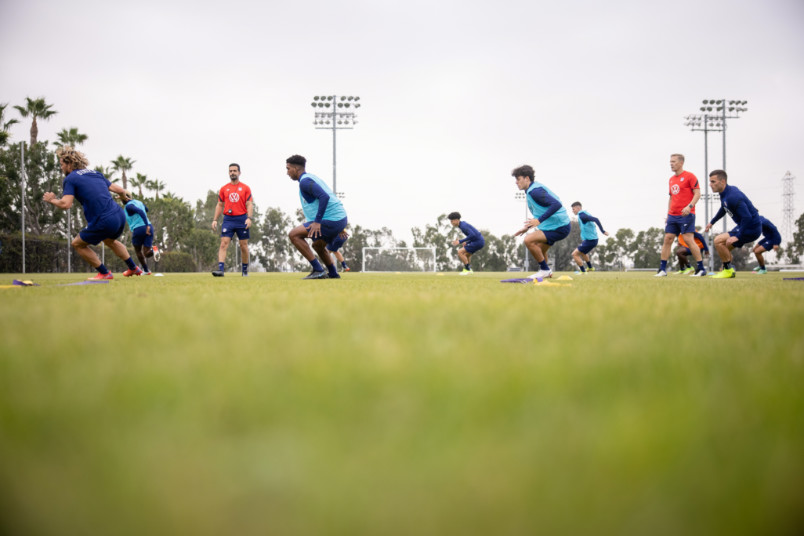 By Jason Davis – WASHINGTON, DC (Dec 8, 2021) US Soccer Players – For people around the world, December is the season of gifts. The same is true for Gregg Berhalter and the US Men’s National Team. For a program looking to maximize the intermission between the first eight Concacaf World Cup qualifiers and the final six games to determine who will go to Qatar for the tournament next November, December is the time to give and receive.

Doing his best Santa Claus, Berhalter handed out invitations to 26 players for an extended national team camp. The period will conclude with a friendly against Bosnia and Herzegovina on December 18, when this group will get a chance to prove themselves against outside competition.

In an era when so much of the senior national team is young, Berhalter’s call-ups aren’t merely an exercise in the spirit of giving. His search for players who can help his team qualify for Qatar, or perhaps make the trip to the World Cup itself, can’t stop during Concacaf’s winter interlude. Berhalter is hoping to give himself something this December: The gift of options.

There are a few veteran faces in camp, players already contributing to the qualifying effort. Then there are the ones coming back from long-term injury, like Jordan Morris and Aaron Long. All involved have the chance to show Berhalter they can be of use in later camps.

For now, the focus is rightfully on the new faces. Some of US soccer’s brightest young talents are in camp, ready to take the next step in their international careers. Major League Soccer’s turn towards academy-developed youth is paying big dividends, and Berhalter’s latest roster reflects the new reality.

Twelve of the 26 players in California have zero senior caps. Here is a look at a few of them as they embark on the quest for international glory.

Gomez is a player between clubs at the moment. US Soccer’s roster lists him as a Louisville City player, but he’ll be on his way to join Real Betis of La Liga as soon as the winter transfer window opens in Spain. That the 18-year-old fullback was plucked out of the second division of American soccer by a club in one of the top leagues in Europe speaks to his significant talent. Gomez took an unconventional route to pro soccer and a European transfer, but every move is paying off so far.

One reason for extra attention on Gomez is the Texas native is also eligible to play for Mexico. Even playing against Bosnia wouldn’t cap-tie him, so this December camp won’t decide his international future. Still, it looks like a positive sign that Gomez accepted the call-up. Berhalther will get a chance to make the case for the USMNT to a talented player at a position of need for the national team.

Cowell is another of the 18-year-olds in camp, one of six on the roster. The San Jose Earthquakes forward signed as a 15-year-old from the club’s academy and is still in the early stages of establishing himself as a force in MLS. He earned his first MLS minutes in 2020 and broke out in 2021, making 14 starts and collecting 1617 minutes.

Five goals and five assists placed him second on the team in both categories in 2021. If there’s a player in Carson without a senior cap who could make an immediate impact on the national team, it might be Cowell. His prodigious physical gifts make him a handful for defenders, regardless of age.

Among the notable aspects of Berhalter’s roster is the amount of defenders. More specifically, the number of players who serve as fullbacks and wing backs with their club teams. Among that group is DC United’s Paredes, another 18-year-old who broke out at the domestic level in 2021. United’s up-and-down season pushed Paredes’s campaign off the front page, but the Virginia native impressed enough to earn MLS Team of the Week recognition on three separate occasions.

Trusted early on by first-year United head coach Hernan Losada, Paredes established himself as one of his team’s most consistent performers over 19 starts and 24 total appearances. Paredes’s ability to cover the wing and contribute on both sides of the ball makes him an ideal fit for Berhalter’s system. In Carson, he’ll get a chance to prove he’s ready for a bigger stage.

Like Gomez, Clark is headed overseas when the transfer window opens. Clark’s jump is a big one, moving from the New York Red Bulls to RB Leipzig of the Bundesliga in January, thanks to the connection provided by the global network of Red Bull clubs. The second-year pro showed flashes of his massive potential in 2021, but an emergency appendectomy meant missing this year’s Gold Cup.

Clark played with the U-20 team that went to Mexico for a three-game tournament in November. In a senior camp with Berhalther’s direction, Clark can push for inclusion in the growing list of young, dynamic attackers playing in qualifying.

The youngest player on the roster is 17-year-old Chicago Fire goalkeeper Gabriel Slonina. Slonina’s rapid rise to prominence is earning him comparisons to some of the world’s top goalkeepers when they were in the dawn of their careers. In a league like MLS, coaches are often hesitant to turn to inexperienced goalkeepers, particularly when there are budget-friendly options available.

Slonina claimed the Fire’s starting spot for good in late September and impressed down the stretch of the season with his shot-stopping and maturity. In a year when the Fire struggled, Slonina was a rare bright spot. His play earned him not only attention from the USMNT, but Poland as well. The Illinois native is eligible for Poland through his parents but has thus far accepted call-ups from the USA only.

Slonina’s turn with the USMNT may or may not get him his first international cap. Still, at 17, he’s already well ahead of the curve for players at his position.