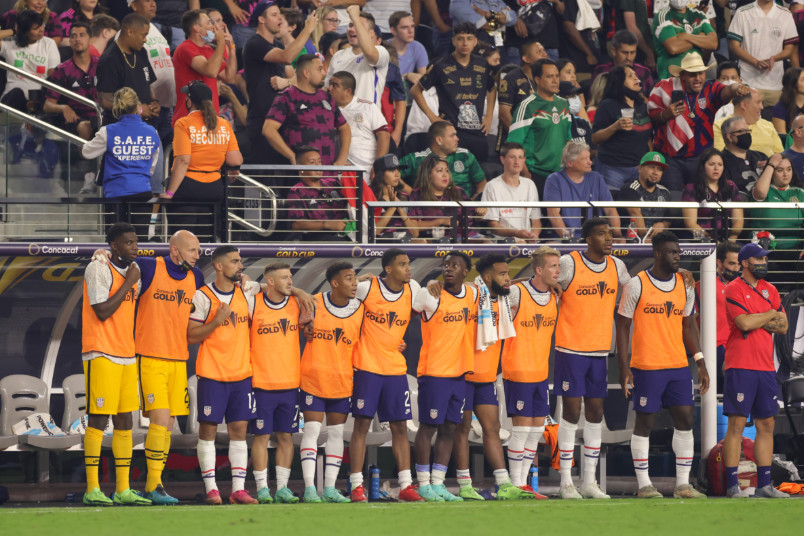 By Clemente Lisi – NEW YORK, NY (Dec 27, 2021) US Soccer Players – The final week of the calendar year usually brings with it stories and commentaries about the past 12 months. While the planet continues to deal with the pandemic, 2021 saw the slow return of sports and some normalcy. In soccer, that return included fans back in the stands in MLS and around the world and major tournaments like the Euros, Copa America, and Gold Cup.

More importantly, we saw the resumption of World Cup Qualifying, albeit in a more compressed schedule. Getting the games in is the next step for Qatar 2022. Concacaf responded by increasing the teams in the final round. For US coach Gregg Berhalter, it meant having to rotate players in key matches of the Octagonal while trying out new ones.

The USMNT officially ended 2021 on December 18, a 1-0 win against Bosnia and Herzegovina. The team, made up mostly of MLS-based players, capped off the year with a 17-2-3 record and the most wins in the program’s history. It was a highly successful 2021 for the USMNT, beating rivals Mexico in the final of both the Concacaf Nations League and Gold Cup.

“Just want to say thank you and congratulations to the player pool for their effort in 2021. We used a lot of different players in 2021 and a lot of different programming,” Berhalter told reporters after the victory against Bosnia and Herzegovina. “We played 10 months out of 12 where we had a competitive game.”

Here’s a look back at the year it’s been for the USMNT and what we can expect in 2022.

Three games, above all, stand out from this calendar year. They share a common opponent. Whenever the USMNT plays Mexico, it changes the scope of the game. In 2021, all three counted more than usual. Two of them took place with a trophy on the line, while the third was a vital home win in World Cup Qualifying.

Concacaf Nations League: The tournament final, postponed from 2020 because of COVID-19, saw the US take on Mexico in Denver. The result was a dramatic 3-2 US win on June 6 that took 30 minutes of extra time. The US came from behind twice at Empower Field, thanks to goals by Gio Reyna after 27 minutes and Weston McKennie eight minutes from time, to push the game into overtime. Christian Pulisic’s penalty in the 110th minute and the goalkeeping heroics of backup keeper Ethan Horvath made the difference. Horvath saved a penalty kick by Andres Guardado in the 124th minute to preserve the victory.

Gold Cup: The Americans won their second big game of the year against El Tri, downing Geraldo “Tata” Martino’s side to capture the Gold Cup. Once again, it took extra time to determine a winner. Miles Robinson’s 117th-minute header before a sold-out crowd of 61,514 at Allegiant Stadium in Las Vegas was the difference. Not only was the win sweet for the USMNT because it came against Mexico, but also because Berhalter had used an entirely different squad compared to the Nations League. Not wanting to overuse European-based players, Berhalter shifted personnel and adapted tactics for the USMNT’s seventh Gold Cup title.

World Cup qualifying: Win number 3 against Mexico once again happened on US soil, this time on November 12 at TQL Stadium in Cincinnati. Pulisic and McKennie were clutch, scoring goals in a 2-0 win. Yes, the Americans had put together another “dos a cero” versus El Tri. Pulisic’s strike in the 74th minute and McKennie goal five minutes from time were the highlights of a match that saw big performances by winger Tim Weah and Zack Steffen in net.

If 2021 was big, 2022 needs to be bigger. That’s because the World Cup looms. First, qualification needs securing. Then it’s the wait for the next games that count. The Octagonal resumes on January 27, with the USMNT hosting El Salvador at Lower.com Field in Columbus. It’s a city where the Americans have had much success in past World Cup Qualifiers, but in a new stadium earning its own reputation as a home venue.

World Cup Qualifying: Three days later, the US has a meeting away at Canada, a game that will certainly be competitive, with both teams looking to clinch qualifying as soon as possible. Canada, like the US, features a roster with a mix of MLS and foreign-based players. On March 24, the US will again lock horns against Mexico at the famed Estadio Azteca. It will be the first of three games in the span of a week to close out the Octagonal. The Americans host Panama on March 27 at a city and venue to be determined before closing out World Cup Qualifying on the road against Costa Rica.

World Cup: The finals will take place in Qatar, the first time the World Cup plays out in the Middle East and the first time it starts in November. FIFA will conduct the draw in April. The tournament begins on November 21, a long time for qualified countries and their coaches to try to figure out how to approach the World Cup. As we all know, the draw will determine the level of difficulty in getting to the knockout round. Getting past that in the unique circumstances of Qatar 2022 may see more surprises than normal.

Player pool: Berhalter could easily call up some new faces in 2022, along with players returning to full fitness. It’s already clear that the USMNT at full strength is more in theory than in practice. Berhalter’s ability to deal with the players available has helped the USMNT put together its monumental 2021. More of the same in 2022 is a fair expectation, but it’s worth the reminder that’s only the case because of the work the group already put in.