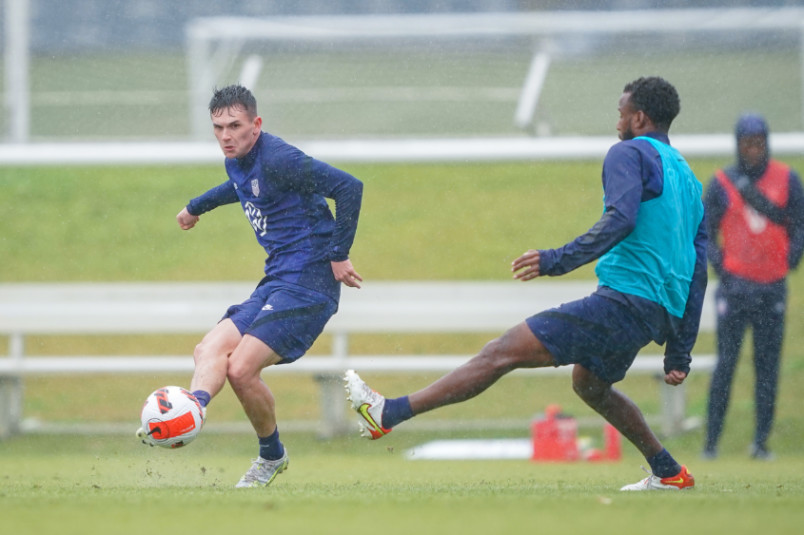 By Charles Boehm – WASHINGTON, DC (Dec 16, 2021) US Soccer Players – Members of the USMNT player pool tend to have an extremely wide range of schedules at this time of year. For most MLS and Liga MX-based players, the holiday season is also about taking a break. It’s a time to rest and recuperate before ramping up towards the start of the preseason in January. Those in Europe are busy with club duty on either side of winter breaks. Meanwhile, in England, the congested “festive fixtures” are their own unique gauntlet.

This winter, Gregg Berhalter would prefer to keep everyone in the pool at or near a happy median, as difficult as that may be. Thanks to the COVID-19 pandemic’s repeated delays to the qualifying schedule for the 2022 World Cup, another three-match window of Concacaf Octagonal action looms at the end of January. The USMNT will host El Salvador and Honduras in Columbus, Ohio and St. Paul, Minnesota, respectively, on either side of a visit to first-place Canada in Hamilton, Ontario.

It’s the first time the USMNT has played competitive games at this time of year since the last of the winter Gold Cups in 2002. With most of MLS idle for the entirety of December and January, the national team must fill that gap in terms of fitness and sharpness. Thus the December camp currently underway at Dignity Healthy Sports Park in Carson, California, which concludes with Saturday’s friendly vs. Bosnia and Herzegovina. Another similar gathering will kick off on January 8.

“We play again January 27, and it’s essential that when we hit the field on January 27, we have guys that are ready to compete at a World Cup qualifying level. So this camp is essential to have,” Berhalter said when announcing his December roster. “We understand that guys have been playing all year and they’re fatigued, and that’s why the program will be slightly different, but we got to keep them moving and looking forward to competing against Bosnia on December 18.”

As of Tuesday’s media availability featuring Taylor Booth and Cristian Roldan, the USMNT had not yet begun in-depth debriefing on this weekend’s opponents. That part is less crucial on this occasion. With this game falling outside of FIFA windows, Bosnia and Herzegovina have gathered an entirely domestic-based roster. Only three players on it are older than 25, and none have more than two caps. It figures to be an inexperienced but hungry adversary, which also applies to a good chunk of the USMNT group.

“Today’s kind of the last day we’re going to go full, all-out and then from tomorrow on, we’re going to start working on Bosnia, and working on tactics,” explained Booth, a former Real Salt Lake academy prospect now at Bayern Munich, where he’s yet to make his Bundesliga debut but trains with the first team. “There’s a lot of young players in this camp, me included. We’re treating it as if it was a normal camp and everyone’s here to work hard and prove to Gregg that we’re here to stay.”

The more veteran members of this US squad are working hard while many of their club teammates are enjoying downtime, and that’s just part of the current national team experience.

“I think it’s tough for club teams, first and foremost, to allow us to be here. Obviously, they want us relaxing and getting ready for the MLS season,” said Roldan. “But as international players, it’s our duty to stay fit and be ready when called upon. And this was another example of us having another opportunity to show that you belong in the qualifier group. So, for us it’s a no-brainer when getting called upon and trying to showcase what you got. Gregg is very analytical, he looks at every training session and every play, so being sharp mentally and physically is going to be really important in this camp and in January.”

Noting that Berhalter’s tactics and philosophies can be “complicated and nerve-wracking at times,” Roldan pointed to the value of bringing along new faces to give them a head start on that learning curve. This December group includes 15 players aged 20 or younger, and 20 are uncapped at senior level.

“Having all the young guys here expanding the player pool is really important. Obviously, when it’s their time to get called in, they want to be flying when they come in and understand the system,” said Roldan. “So it’s a good time to bring in newer guys and have us older guys help them out in that sense.”

The World Cup itself is looming, too, now less than a year away. A glance across USMNT history shows that even the greenest newcomers still have a chance to earn their way onto the plane to Qatar if they prove they can do a job. That’s more than enough to make big dreams feel attainable.

“So far working with Gregg has been really good and he’s been able to implement the tactics into my game and help me learn quickly,” said Booth, who has been training in the No. 8 central-midfield role that is so influential in the USMNT’s currently preferred 4-3-3 shape.

The Utah native did not hide his aspirations to climb the depth charts quickly enough to earn a call for the upcoming qualifiers.

“I’m always confident in my game,” said the 20-year-old. “So I’ve had a good first week of training and I’m not going to stop working hard.”