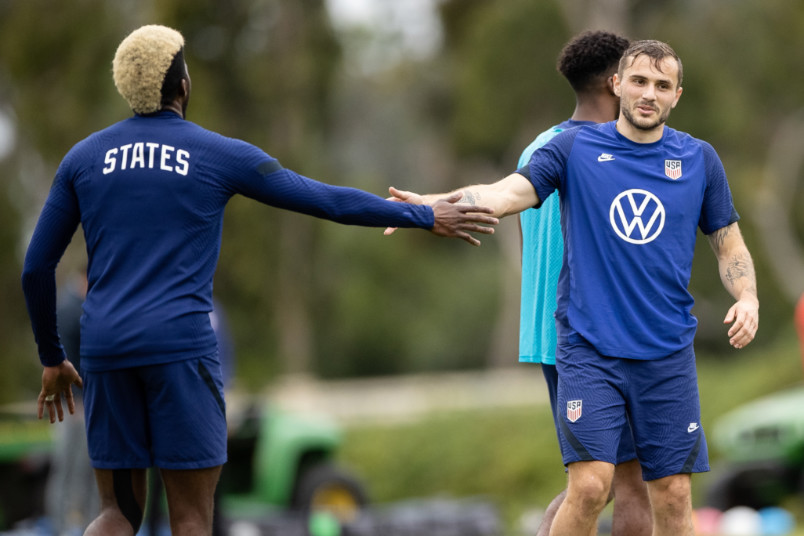 By Jason Davis – WASHINGTON, DC (Dec 10, 2021) US Soccer Players – The USMNT doesn’t usually gather in December. In a normal year, the November international window brings the final camp and games of the calendar. It’s not considered necessary when the USMNT regularly holds an out of window January camp. That changed last year when a lack of dates necessitated adding a camp in December. It continues this year with a rare January-February international window looming. Since World Cup qualifying resumes on January 27, the USMNT has plenty of reason to pack the calendar with as much activity as possible.

The makeup of the 26-player December roster called in by head coach Gregg Berhalter is largely young and inexperienced. A dozen players are uncapped, with seven of those players still teenagers. Two other teenagers, Ricardo Pepi and George Bello, received their first caps earlier this year. As the calendar year comes to a close, Berhalter’s mission is about finding depth from the rising generation of American talent.

The roster is also heavily domestically based, with a few notable exceptions. While the USMNT’s European-based contingent pushes through one of the more congested parts of their club seasons, a group of MLS players gets a chance to impress the national team boss. There might even be spots in the two remaining qualifying windows up for grabs.

A few of the players on the scene in Carson are more familiar to Berhalter and the program. While the majority of the roster can count their national team caps on one hand or not at all, there are three names with more than 30 national team appearances on their resumes and one player closing in on that number.

Berhalter is turning to those veterans to be a good influence on the young players in an extended camp while the players are working to stay sharp during the MLS offseason. This camp is also a return to the team for one veteran who might be primed to play a big role in the qualifiers on the calendar in 2022.

No one on the roster has more caps than Zardes with 65. The Columbus Crew forward missed the beginning of World Cup qualifying in 2021 because of injury. He returned in October to play in three games, including a start against Panama on October 10.

Now 30, Zardes is the most veteran striker option among Berhalter’s ever-evolving group. What Zardes has is a clear understanding of the responsibilities in the USMNT’s system. Berhalter has adapted tactically as a coach since he had Zardes playing for him with the Crew, but it’s clear that there remains an important role for Zardes in the team.

While the December camp is much more about the training field than the match against Bosnia and Herzegovina, Zardes’s presence means the USMNT has a proven goalscorer at the international level in the team. Zardes’s 14 international goals are the most of any player in camp. His next goal will tie him with Cobi Jones for 13th on the all-time goal scoring list.

The Colorado Rapids midfielder has been a fixture for the United States in 2021, playing in all but one match during the year. Those 19 appearances bring his overall number of caps to 44. Acosta established himself as a key piece of the midfield with good performances in the Nations League, followed by a virtuoso outing against Mexico in the Gold Cup final.

It’s fair to say that the United States would be two trophies and several qualifying points poorer if not for the work Acosta did this year. That’s earned the trust of his coach. In a team that rarely has every first-choice player available, Acosta’s rise to prominence is a crucial part of the team’s success. That rise is more remarkable in light of Acosta’s absence from the national team in 2019.

In the last year with a full national team schedule, Acosta appeared zero times for his country. There was no clear path back to the squad despite his good play in Colorado with a youth movement taking hold with the national team. Acosta proved he belongs in the team and can be a central figure in qualifying. He showed both leadership and savvy in 2021, ingredients not in ample supply for such a young team.

This was supposed to be a big year for Morris, but bad luck had other plans. After a strong 2020 earned him a chance to play on loan for Swansea of the English Championship, Morris tore the ACL in his left knee in his fifth appearance there. That took away his chance to not only build a future in England but also to play a role in the USMNT’s busy year.

Morris’s growth for club and country made him a presumed regular for Berhalter before the injury. His race back to fitness got him on the field just in time to play a small part in the Sounders’ season and to get a chance to participate in the December national team camp. What he gives Berhalter are options.

His status as a player working back from injury makes Morris one of the more intriguing stories this winter. There’s no questioning his talent. If he’s healthy enough to contribute, he will give Berhalter something to think about in the forward areas of the field. Morris is not only an option to play wide in Berhater’s usual 4-3-3, he could also be deployed centrally.

Rolan isn’t yet a member of the 30-cap club, but he’ll join Zardes, Acosta, and Morris in that group if he takes the field against Bosnia and Herzegovina on December 18. Through the packed schedule of 2021, he’s been a fixture for Berhalter. The Sounders midfielder was handed more freedom for his club team during the MLS season because of injuries that changed the complexion of the perennial contenders. That role, which carried more attacking responsibilities than Roldan had ever had before, served him well with the USMNT.

Roldan’s unceasing engine is an asset that fits well with an increasingly press-happy USMNT. With his significant experience in big games and a penchant for popping up in the right place at the right time, Roldan made himself indispensable for his country.

There’s no reason to think that Roldan won’t be on hand for some or all of the remaining six World Cup qualifiers coming in 2022. His presence in this camp connects a green group with the first team while also helping Roldan stay as sharp as possible going into the new year.