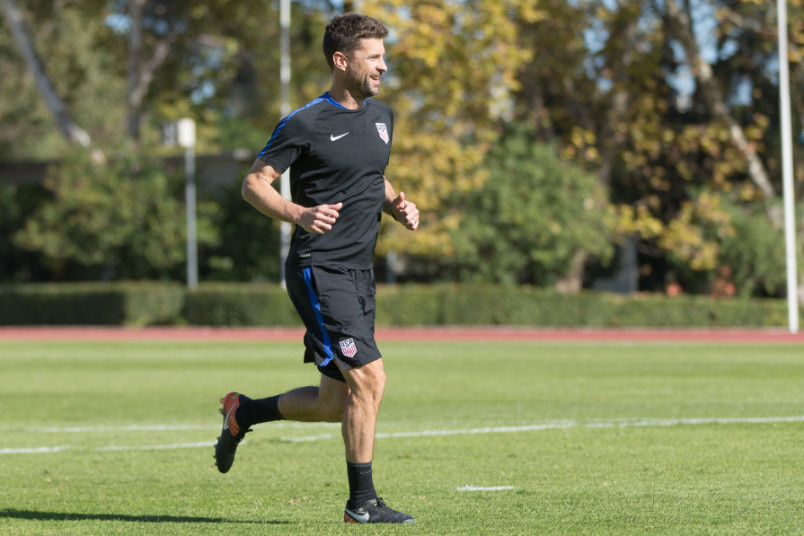 By Jason Davis – WASHINGTON, DC (Dec 22, 2021) US Soccer Players – For the American coach, there remains one truly available path for professional success. Though Americans have made inroads in European soccer in the last few years, Major League Soccer is the topflight competition that offers a clear pathway for coaches born and raised in the United States.

Because of the USMNT’s late arrival on the world stage, the early years of MLS saw a mix of foreign hires, with a sprinkling of Americans mostly reared in the college ranks. The league’s first class of coaches included just two Americans, Dave Dir of the Dallas Burn and Bruce Arena of DC United.

Dir earned his stripes coaching at Regis University in Denver and with the Colorado Foxes of the APSL. Arena’s success in college with the University of Virginia garnered him a shot at MLS when the league launched in 1996.

Though the initial group of MLS coaches in the ten-team competition lacked much American influence, the tide quickly shifted. Within six years of the league’s start, Americans held the majority of the coaching jobs.

Few of those trailblazers in America’s first national first division since the death of the North American Soccer League ever played a minute for their country. The national team program was so moribund during the athletic heydays of coaches old enough to be in charge on the first day of MLS that it was a minor miracle that the league’s first great coach, Bruce Arena, possessed a single cap.

The first American MLS coach with more than a single appearance for the national team was Glenn Myernick, who led the Rapids from 1997 to 2000. Myernick collected 10 caps in the late 70s and captained the team in 1978.

By the middle of the first decade of the 21st century, a retiring class of internationals who helped the USMNT rise in the 90s made their way into coaching. Dom Kinnear, the Scottish-born USMNT veteran who earned 54 caps for the national team, took the helm of the San Jose Earthquakes in 2004 and stayed when the team became the Houston Dynamo in 2006. In his first season, Kinnear led San Jose to a Supporters’ Shield, then won back-to-back MLS Cup titles in 2006 and 2007. Over the years, several former US internationals made their mark in MLS, following in Kinnear’s footsteps.

Peter Vermes stands out for both his success and for his longevity. As a player, Vermes represented the United States at the 1990 World Cup and scored 11 goals in 66 appearances. After a transition to a role as a technical director for the then-Kansas City Wizards, Vermes took on the head coaching role in 2009. He now ranks fourth all-time for regular-season wins and has brought Sporting Kansas City an MLS Cup (2013) and three US Open Cup titles (2012, 2015, 2017).

No coach in MLS is more tenured than Vermes. Several of his American colleagues with their own USMNT resumes are hoping to emulate his success.

The ranks of former USMNT players among MLS coaches will enter 2022 at the same total as it ended 2021 despite some changes. US great Tab Ramos parted ways with the Dynamo after two seasons, but FC Cincinnati installed 15-cap winner Pat Noonan as its new field boss going into the new campaign.

It’s Mastroeni that can now boast the most USMNT caps among the national team alumni in the list of MLS head coaches. He played 65 times for the United States over a decade, most notably starring in a 2002 team that lost Chris Armas to injury just before the tournament.

Mastroeni is a fascinating story as a coach. Like many ex-players, he immediately moved into an assistant role following the end of his playing career in 2013 by joining the Colorado Rapids under Oscar Pareja. If allowed, the hard-nosed midfielder might have learned on the job before ever being given the reins of a first-team operation.

Instead, Pareja’s sudden departure from the Rapids a week ahead of the 2014 season thrust Mastroeni into a head coach job before even he believed he was ready. The club suffered through its worst season in history and finished last, a humiliation they would repeat in 2015.

The club stuck with Mastroeni. In 2016 the Rapids finished with their best regular-season record to that point, with Mastroeni earning accolades for the turnaround. Unfortunately for Mastroeni, progress isn’t always linear. Halfway through the 2017 campaign, Colorado made a change.

It took Mastroeni five years to get another shot. Once again, it was because of a sudden coaching departure. After turning RSL into a surprise conference finalist in 2021, Mastroeni will get a chance in 2022 to show what he’s learned in the intervening years since his original run in Colorado.

Noonan’s story is closer to Wolff’s, who now ranks second to Mastroeni for most USMNT caps among MLS head coaches. Both men walked a traditional path to becoming head coaches, serving first as assistants under accomplished bosses before ascending to the top job on the strengths of their reputations around American soccer.

Like Mastroeni, the job for Wolff and Noonan comes with a high degree of difficulty. Wolff found that out the hard way in Austin FC’s inaugural season. The former USMNT forward’s plans for a free-flowing, attacking style of play ran headlong into the realities of fielding a first-year squad. Wolff will return in 2022 a little wiser and with the backing of a club anxious to win.

No club in MLS is more anxious to win than FC Cincinnati. That should work to Noonan’s advantage, but his learning curve could be steeper than Wolff’s. There might not be expectations in Cincinnati, but the fans want to support a winner. That means a quick turnaround.

As the youngest of the USMNT alum group in MLS coaching, Wolff and Noonan represent the next wave of former players to move to the sidelines. Several of their contemporaries may be ready to make their own move to a top job in MLS in the near future.

Landon Donovan, Conor Casey, and Steve Cherundolo all have head coaching jobs in the second division. A number of former US internationals are working as MLS assistants. The trend across the league towards hiring Americans can only help the chances that former internationals will soon play a bigger role in what happens on the field in the not-too-distant future.