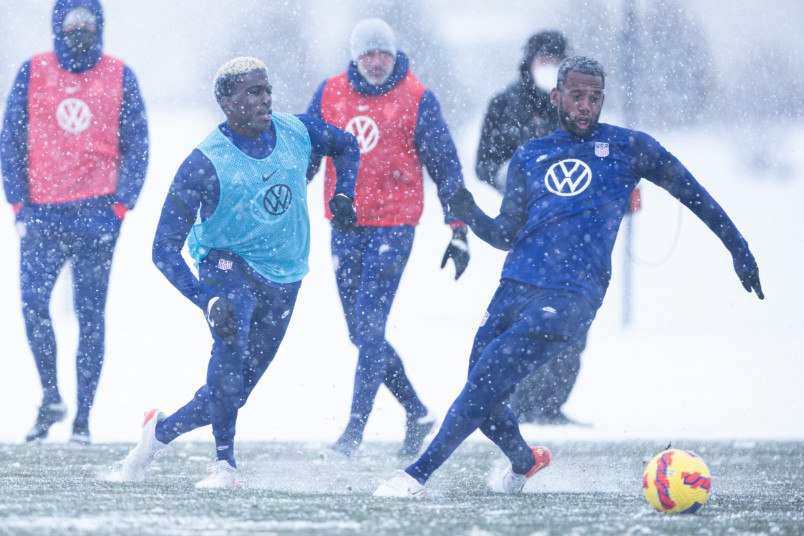 By Charles Boehm – WASHINGTON, DC (Jan 27, 2022) US Soccer Players – Weather aside, one of the top topics of the USMNT’s current World Cup qualifying window has been the fitness aspect of competitive matches in midwinter, in a pandemic. The coaching staff had to mesh their European-based cadre of players, most of whom are in full flow thanks to their club schedules, with a domestic group that is out of season but in training camp earlier this month. USMNT coach Gregg Berhalter was definitive when he unveiled his roster for these three qualifiers.

“We pushed them hard this [January] camp, enough so that we’re confident that they’ll be fit enough to compete,” he said. “With the European guys, most of them have been playing and if not they’ve been training regularly and should be at a good level as well. We think fitness won’t be an issue in this camp.”

How can he be so sure? The answer to that started nearly two months ago when the USMNT convened a domestic-based squad for a rare December camp to help bridge the gap between the end of the MLS and USL Championship seasons and the enormous Octagonal matches in January and early February. As a result, many of the same players had only a brief offseason break before rejoining Berhalter & Co in Phoenix for even more training, much of it demanding cardiovascular work.

“December camp was important, I think, for a lot of us to just maintain rhythm, continue to have games and training, keep your fitness up, and really only taking nine, 10 days off right after that [Bosnia & Herzegovina friendly] game and then right back into it,” defender Walker Zimmerman said this month. “That’s been the beauty of this camp is, we’re not just preparing for some kind of friendly. We’re preparing for three qualifiers. And so that being said, the staff’s done a really good job of making sure that we are fit, that we are gaining fitness. So we’ve had scrimmages, bike workouts in the afternoon to just increase our aerobic fitness.”

You have to go back two decades to find the last time the USMNT faced a situation like this. Old-timers will recall that the Gold Cup used to be a midwinter tournament. The 2002 edition happened while Bruce Arena was in the midst of rebuilding the program after the woes of the 1998 World Cup.

Arena turned to his new fitness and conditioning coach, Pierre Barrieu, to guide the January camp, a concept he’d inherited from Steve Sampson that would become a long USMNT tradition.

“Bruce at the time brought me on board and pretty much gave me the green light,” Barrieu, now with Toronto FC, told USSoccerPlayers.com. “He said, what do you have in mind? The goal is to be competitive for the Gold Cup.’ I told him what I was thinking of and he said ‘OK, why don’t we train doubles? You can train [fitness] in the morning and then we focus on the tactical in the afternoon.’ And it was a hard camp.”

There’s a rich irony that this annual event has been tagged ‘Camp Cupcake’ by some over the years. Given several weeks to work with a roster of MLS players and a few others experiencing difficult club situations abroad like Frankie Hejduk and Eddie Lewis, Barrieu laid out a punishing, immersive regimen.

“It was a heavy, heavy volume. And we trained for a month; we used the track in the morning, like a running track for track and field, and then we progressed to football-specific type of conditioning,” he noted, adding that such an undertaking would be much more difficult in today’s environment. “And in the afternoon it was lighter.”

All that sweat equity paid off. It took a tight penalty-kick shootout to dispatch defending champions Canada in the semifinals, and they benefited when guests South Korea edged Mexico in the quarterfinals. The USMNT marched through that Gold Cup undefeated, winning the title for the first time in over a decade.

Even more importantly, it built belief in Arena’s system. That laid the groundwork, both mentally and physically, for the sensational run to the World Cup quarterfinals that summer. Notably, one Gregg Berhalter started both of the knockout games. Despite stifling heat and humidity, the Yanks earned a reputation as one of the fittest and most dynamic teams in that tournament.

For Barrieu, the task in front of the current USMNT is simpler in comparison to 2002.

“We’re talking three games, three games in a 10-day period. It’s not being able to sustain high-level athleticism for a month and a half,” he said. “Plus nowadays I think players have been given [workout plans] to do in the meantime; there’s a lot of stake for them because it’s a World Cup year. So I think the professionalism from the players will be there to report in decent shape already, and then you have time to prepare them for really specific and punctual effort. So I think they can not only be fit for the games, I think they can be very fit.”

Berhalter is known as a data-oriented coach with a meticulous structure to all team activities. In that sense, it’s perhaps not surprising he believes he and his staff can fine-tune their sessions to ensure the MLS players measure up to counterparts overseas who enjoy the prized but sometimes hard-to-quantify status of being “match fit.”

Some see the decision to play both of this window’s home games in icy conditions in Ohio and Minnesota as injecting another factor of uncertainty here. For Barrieu, it’s “a calculated risk” on Berhalter’s part, with discomfort for the visitors outweighing other concerns.

“The question is not so much about the stress on the US bodies, it’s more about the shock on the Salvadoran bodies or the Honduran bodies,” he said. “That’s the luxury of the national team, is that every once in a while you have a period of training geared towards a few specific competitive games. So I see it as an advantage rather than a headache.”

In a sense, the core challenge of an international coach is balancing that mixture of extensive planning and design with the inevitable surprises that crop up in real time. Berhalter had months to arrange everything that led up to this week. Yet he also had to adapt on the fly when Gianluca Busio was ruled out of this camp, Zack Steffen had a back injury flareup, and extreme weather delayed DeAndre Yedlin’s arrival.

“I really took advice from some of the ex-national team coaches, in particular Bruce and Jurgen [Klinsmann] and Bob [Bradley], when they’re telling me that, listen, the national team, you’re not going to be able to call on all your guys all the time,” the USMNT boss said on Wednesday. “It’s just not happening, just due to injuries, suspensions, club releases, whatever you have, it’s going to be complicated. So we’ve rolled with that mindset. And we just adapted. Whoever’s in camp, whoever’s fit, whoever’s available, we go with them, and we’re confident in the group, confident in the depth of this group.”