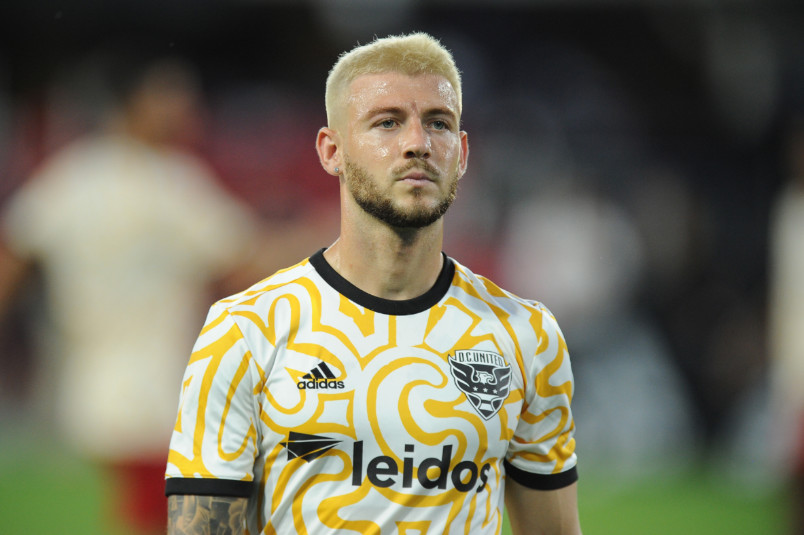 By Jason Davis – WASHINGTON, DC (Jan 28, 2022) US Soccer Players – Every team in MLS has a plan. It’s the nature of the business, of putting together a team that can climb the table and make the playoffs. And, if everything goes just right, compete for a championship. Planning is a crucial part of the process because while every club would like to sit back and let the trophies come their way, that’s not how it works.

Planning matters because things so rarely neatly align. Previous plans go wrong, whether through your mistakes or someone else’s, necessitating new plans. Plans can, or should, have multiple levels, with timing playing a transformative role in how things happen. Every plan has contingencies. Rather, every plan needs contingencies because plans can change in ways that are beyond your control. Take DC United, for example.

After an unsuccessful yet encouraging 2021 season, the Black & Red looked prime to hit the winter with a shopping list that would augment the pieces already in place under head coach Hernan Losada. Losada’s high-energy approach didn’t result in a playoff appearance for United, but it did reinvigorate the fan base, providing hope for a bright future.

If Losada was expecting to ride into 2022 on that wave of good feeling and with the same set of key players in tow, January provided a rude awakening. In just a few days over the last week, through deals negotiated simultaneously, United parted ways with two of its most important figures from last season.

USMNT winger Paul Arriola, one of two Designated Players on the books in DC last season, left for FC Dallas in a blockbuster move that set a new record for trade value in Major League Soccer. Dallas shipped United $2m in General Allocation Money spread over two seasons, with an additional $300,000 due to DC if Arriola meets certain performance thresholds.

That hefty price tag should make DC United fans feel better about Arriola’s departure, but there is the small matter of spending the GAM quickly and wisely. DC United general manager Lucy Rushton needs to replace Arriola’s production and work rate before the season begins.

Along with Edison Flores, the club’s other Designated Player, Arriola was a star in the brightening constellation at the club. His status with the national team brought United attention, and his outgoing public persona served the club well in the community. Arriola was a leader in a team making a turn towards youth. FC Dallas’ offer completely changed the plan. Then DC got another offer.

The best reflection of the club’s emphasis on the academy in 2021 was winger Kevin Paredes. The teenager stood out as a dynamic force on the flank for DC, embodying both the new commitment to development at the club and the energetic style of play. Paredes collected three goals and an assist in 24 games. By the end of the season, he was one of the building blocks for United’s 2022 season. For a club that spent years working out how to compete with the biggest spenders in the league, the arrival of Paredes (and several other intriguing homegrown talents) pointed to a club headed in the right direction.

Like with Arriola, United got an offer for Paredes it couldn’t turn down. The 18-year-old Virginian is on his way to Germany after Bundesliga club Wolfsburg agreed to pay a $7.5m transfer fee. The move is the latest in a spate of multi-million dollar buys of talented American players.

What benefits Major League Soccer’s reputation as a selling league hurts DC in the short term. Like any club shipping a young player out, United is selling high on a player with a limited resume. There are lots of reasons to think that Paredes could be a star in the making, but it also makes sense for DC to take a sizable offer.

United wasted no time converting the money coming in from the Arriola and Paredes moves into new players. The plan changing at the moment.

To replace Paredes’s ability to change games from the left-wing, DC traded $750,000 in GAM for Seattle Sounders fullback Brad Smith. The 27-year-old Australian brings with him the winning mentality baked into the Sounders’ identity to go with blazing speed up the wing. Paired with Julian Gressel on the right side, United now has a one-two wide punch that should make them dangerous. Smith and Gressel will need a trustworthy target up top to make their speed and service count.

For the casual observer, it might be surprising that United is in the market for a goalscorer. 2021’s lead striker, MLS veteran Ola Kamara, tied for the league lead in scoring and lost out on the Golden Boot to Valentin Castellanos via a tiebreaker. But Kamara is 32, in the final year of his contract, and takes most of the team’s penalties.

United’s ability to spend doesn’t compare to the top of the league in that category, forcing the front office to get creative. While clubs across the large are dropping significant transfer fees on young attackers or backing up the truck for prestige signings, DC is scouring the middle tiers of European soccer for a budget-minded option who can score goals.

To that end, United announced the signing of 26-year-old Taxiarchis “Taxi” Fountas to a pre-contract on Thursday. Fountas’s expiring contract with Rapid Vienna of the Austrian Bundesliga allows him to sign with United on a free transfer. However, he won’t join the MLS side until the summer under the current agreement. He signs with DC as a DP.

United may attempt to negotiate a release from the remainder of his deal with Rapid Vienna, a move that would likely require paying some fee to the Austrian club. This is United being at the mercy of the misaligned season calendars between MLS and continental Europe: Losada would undoubtedly like to have Fountas in before the season begins, but United’s roster-building approach limits its options.

Fountas could be just the first of United’s international acquisitions in this window. Reports suggest the club is on the hunt for a player out of Mexico. The retooling of United doesn’t appear to be over.

Maybe Fountas and another striker were always in the plan. Maybe the club even eyed Smith before Paredes’s transfer. But the chances are that DC United, like so many other teams who find their players in demand and the offer difficult to turn, adjusted on the fly. Everyone has a plan. Then it changes.