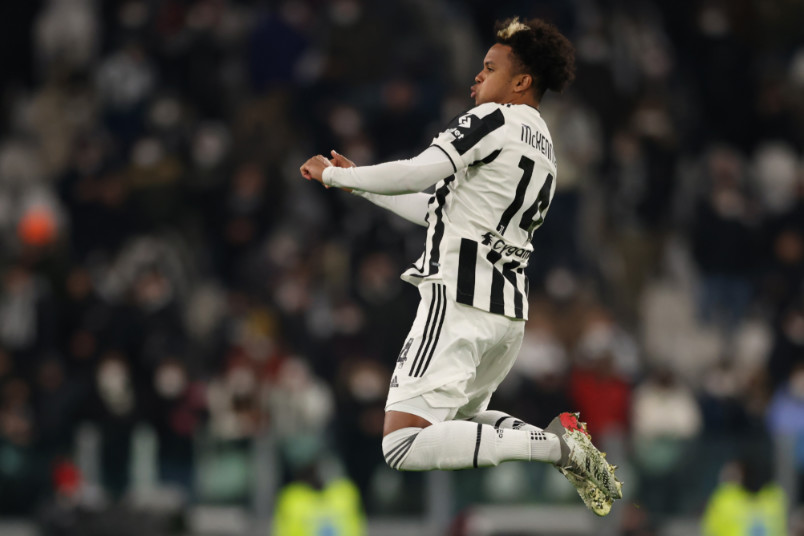 Friday’s soccer news starts in Serie A. Weson McKennie’s Juventus drew 1-1 at home with Napoli. Traling from the 23rd, Federico Chiesa equalized for Juventus in the 54th minute. The point has Juventus in 5th-place with 35 points from 20 games.

“This was a clash with a direct rival,” Juventus coach Max Allegri said. “Napoli played well and we did too. We could’ve taken the lead, but we lacked precision in the final third. After equalising, we had three or four minutes of decent pressure. We then became a bit sloppy in possession and rushed our play. We wanted to win to close the gap in the table, but we should also focus on the positives. The gap still remains the same. The team produced a good performance against a decent Napoli side that knew how to make life difficult for us.”

Bryan Reynolds wasn’t in the squad for Roma in their 3-1 loss at AC Milan. Falling behind to an 8th minute penalty and a 17th minute goal, Tammy Abraham scored for Roma in the 40th. Roma’s Rick Karsdorp saw red in the 74th minute and Milan added a third goal in the 81st. Gianluca Mancini also exited with a red card in stoppage time to reduce Roma to nine men. Roma is in 7th-place tied on points with 6th-place Fiorentina and 8th-place Lazio, three points behind Juventus.

“We are where our quality, coupled with all the refereeing incidents that have gone against us, mean we should be,” Roma coach Jose Mourinho said. “We are an average squad that could have three, four, five or six more points – but that’s where we are. If I look at the first goal and the late penalty then they are both clear examples where we have given the opposition chances. Then there were many other moments where we made significant mistakes. I didn’t see a problem with the tactical setup, just a lack of quality in that regard.”

Inter Milan leads the Serie A table by a point over AC Milan 46 to 45 but with a game in hand. Napoli is in 3rd-place on 40 points. Atalanta holds the final Champions League spot with 38.

ESPN’s Graham Hunter on overuse of players. The Ringer’s Micah Peters explains the situation for Chelsea chasing Manchester City at the top of the Premier League. Inside World Football’s Paul Nicholson with Inter Miami’s stadium plan.

Saturday has La Liga on ESPN Deportes: Levante vs Mallorca at 8am. Primeira Liga on GolTV: Estoril vs Porto at 1pm and Boavista vs Tondela at 3:30pm. Ligue 1 on beIN Sport: Lens vs Rennes at 3pm.

Liga MX on FS1: Monterrey vs Queretaro at 6pm and Santos Laguna vs Tigres at 8pm. Univision has Cruz Azul vs Tijuana at 10pm.

Sunday has Ligue 1 on beIn Sport: Brest vs Nice at 7am and Lyon vs PSG at 2:45pm. beIN en Espanol has Nantes vs Monaco at 11am. Primeira Liga on GolTV: Portimonense vs Maritimo at 10:30am and Benfica vs Pacos de Ferreira at 1pm.

Liga MX on Univision: UNAM Pumas vs Toluca at 1pm and Telemundo: Chivas vs Mazatlan at 7pm.

Monday has the Cup of Nations on beIN Sport: Senegal vs Zimbabwe at 8am and Comoros vs Gabon at 2pm. Super Lig on beIN Sport: Fenerbahce vs Demirspor at 12pm. All Times Eastern