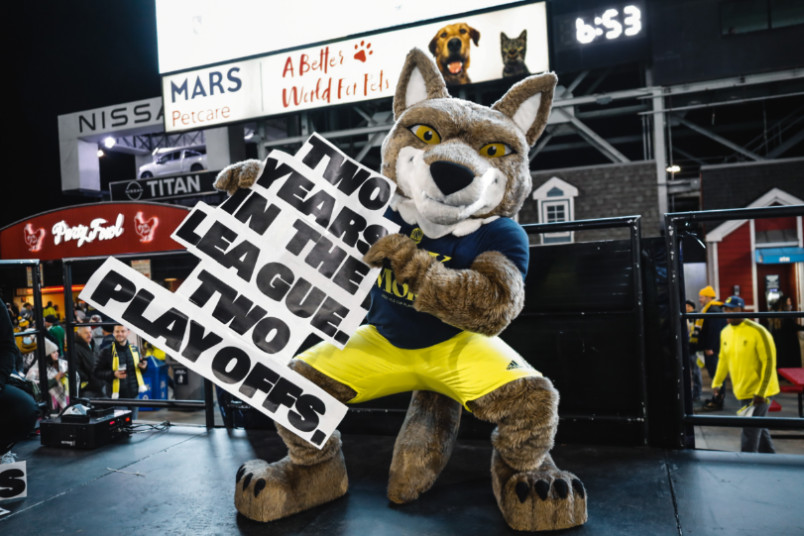 By Clemente Lisi – NEW YORK, NY (Jan 31, 2022) US Soccer Players – With Charlotte FC joining MLS for its debut season, the total number of teams in the league is now at 28. That creates an even split between the conferences. With Charlotte joining the Eastern Conference, Nashville SC moves back to the Western Conference. That type of realignment is not out of the ordinary in MLS during the expansion era.

Keeping the schedule at 34 regular season games, each team will play the other 13 MLS clubs in its conference twice, home and away. The remaining eight games on a team’s schedule will feature those from the opposite conference. Once again, that means that not every MLS team will face each other this season.

The New England Revolution won the Supporters’ Shield in 2021. The next four teams in the standings, Colorado Rapids, Seattle Sounders FC, Sporting Kansas City, and the Portland Timbers, all hailed from the Western Conference. While the Revs ran away with the Eastern Conference, the Rapids won the West on the final day of the regular season.

If things hold up in 2022 – a very big if given the ever-changing power shift in MLS from year-to-year – then the Western Conference could once again feature the best regular season teams. The West was widely lauded as the stronger conference in 2020 as well, at least in the regular season. With Columbus winning MLS Cup in 2020 and NYCFC the defending champions, the East proved its point in the playoffs.

Nashville SC finished third in the Eastern Conference in 2021, an ascent thanks largely to the wonderful play of Walker Zimmerman. He’s now a two-time MLS Defender of the Year, winning the award last season and a USMNT regular during this World Cup Qualifying cycle. An expansion side in 2020, the team has made the MLS Cup Playoffs two years running. That streak now moves West.

Which conference Nashville SC will play in this season isn’t a major talking point for the team this preseason. Instead, issues like re-signing players and astutely using General Allocation Money is what the front office is focused on as the team heads into its third season.

Nashville was originally a Western Conference side back in 2020, moving to the East due to the pandemic restart and staying there for 2021. Nashville SC played Atlanta United FC three times in 2021, a matchup that will only take place once on May 21 in Nashville. Another outcome of the conference shift means Nashville will not face NYCFC during the regular season after their tense match last season featured a melee.

Then there’s the travel with six teams, almost half of the Conference, located along the Pacific coastline. The geographic reality of the conference is that the closest team to Nashville is Sporting Kansas City, almost 600 miles away. In 2020, Nashville didn’t experience this grueling travel schedule since COVID-19 altered the regular season.

At home, Nashville will host teams in a new facility. Nashville SC Stadium will officially open on May 1 against the Union. The venue, the largest soccer-specific stadium in the country with 30,000 seats, is expected to become the latest example of how MLS works in new markets. In other words, playing at home will be a very big deal for Nashville, especially this coming season.

What can we expect from Charlotte FC? That’s always a big question when discussing an expansion side. They join a group of teams close enough to call it a road trip in the Eastern Conference. That works in both directions. Charlotte FC will have some stiff competition this season, having to play the Revs, NYCFC, and the Philadelphia Union twice. As a new team, Charlotte FC faces an uphill task regardless of conference.

The team has generated plenty of enthusiasm. They will play in Bank of America Stadium, whose main tenant is the NFL’s Carolina Panthers. The team has already sold 40,000 tickets for their first home game scheduled on March 5 against the Los Angeles Galaxy. The new franchise has a target of 20,000 season tickets for this season. They just signed their first-ever Designated Player, acquiring Polish international striker Karol Swiderski from Greek club PAOK.

Fans in the region can get a glimpse of the team over the next few weeks in neighboring South Carolina. Charlotte FC will participate in the Carolina Challenge Cup from February 12 to 19. The annual preseason tournament, back following after a two-year break because of the pandemic, will feature the Charleston Battery of the USL Championship and MLS sides Columbus Crew and Inter Miami CF.

“We’re honored to have been invited to this year’s Carolina Challenge Cup in Charleston ahead of the 2022 Major League Soccer season,” Charlotte FC Club President Nick Kelly said in a news release. “It’s a unique opportunity to be able to have the club’s first public-facing matches in our region at a tournament that is synonymous with soccer in the Carolinas.”

Charlotte FC will get the chance to preview what they can expect from the MLS regular season with games against the Crew on February 15 and Inter Miami CF four days later to close out the preseason round-robin tournament. For Charlotte FC, it’s all about getting their players minutes and conditioning them for the rigors of the Eastern Conference and all that comes with competing in MLS.