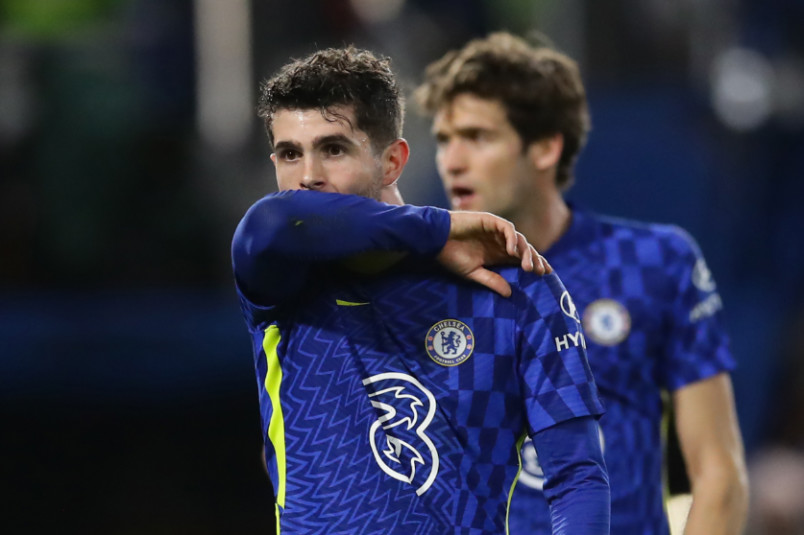 Monday’s soccer news starts with Christian Pulisic scoring in Chelsea’s 2-2 home draw with Liverpool in the Premier League. Falling behind to goals in the 9th and 26th minutes, Mateo Kovacic scored for Chelsea in the 42nd. Pulisic equalized a minute into first-half stoppage time.

“Obviously, a fantastic match of fooball,” Pulisic said. “One with emotions flying all over the place. It was a very exciting one where we would’ve obviously loved to get three points. In the end it was a good fight from the team.”

Zack Steffen was on the bench for Manchester City’s 2-1 win at Arsenal. Trailing from the 31st minute, City’s Riyad Mahrez converted a penalty in the 57th. City went a man up two minutes later. Rodri scored their winner three minutes into stoppage time.

“Arsenal were better,” Manchester City manager Pep Guardiola said. “We faced a team in the last years who struggled to be in the top four and started the season at the bottom, but they are in the top four now and had six or seven days from last game. We had two and a half, we came back and didn’t have energy. That’s why we tried to put one more in the middle to have control and more passes.”

Yunus Musah was on the bench for Valencia’s 2-1 home loss to Espanyol in La Liga. Omar Alderete scored for Valencia in the 51st, but a red card to Hugo Duro in the 82nd setup an 83rd minute Espanyol penalty. Espanyol scored again in the 88th. Matt Miazga was on the bench for Alaves’s 1-1 home draw with Real Sociedad. Falling behind in the 14th, Alaves’s Joselu converted a 58th minute penalty. Sergino Dest wasn’t in the squad for Barcelona’s 1-0 win at Mallorca. Luuk de Jong scored in the 44th minute.

Nicholas Gioacchini subbed on in the 75th minute of Marseille’s 1-0 win at Strasbourg in the Coupe de France round of 32. Mihailo Rostic scored in the 20th minute. Konrad De La Fuente wasn’t in the squad for Marseille’s 3-0 win at Chauvigny. Arkadiusz Milik scored in the 29th and Cengiz Under doubled the lead in the 41st. Amine Harit finished off the scoring in the 80th minute.

Also in the soccer news, Daryl Dike is now a member of West Bromwich Albion, completing a move from Orlando City. “I am extremely grateful to everyone at Orlando City for believing in me and for giving me the opportunity to play for this incredible club,” Dike said. “This was a great place for me to start my career and I am thankful to the club for helping me toward this next step of my journey. I will always cherish my time here with my teammates, coaches, and staff, but I’ll especially miss the fans and the incredible atmosphere they create for each home game.”

Ricardo Pepi’s move from FC Dallas to Augsburg became official on Monday. “An opportunity like this is something I have worked my entire life to accomplish,” Pepi said. “This is truly a dream realized. I understand that I have to keep pushing, training and growing. I am grateful to the FC Dallas organization for helping me achieve this goal. I will always have a special place in my heart for FC Dallas and our amazing fans. Thank you for supporting me. I will continue to make you proud.”

iNews’ Daniel Story lists what he wants to see from soccer in 2022. The Independent’s Miguel Delaney sets the bar higher for professional soccer. Football365 works through the escape scenarios for Premier League clubs in relegation trouble.