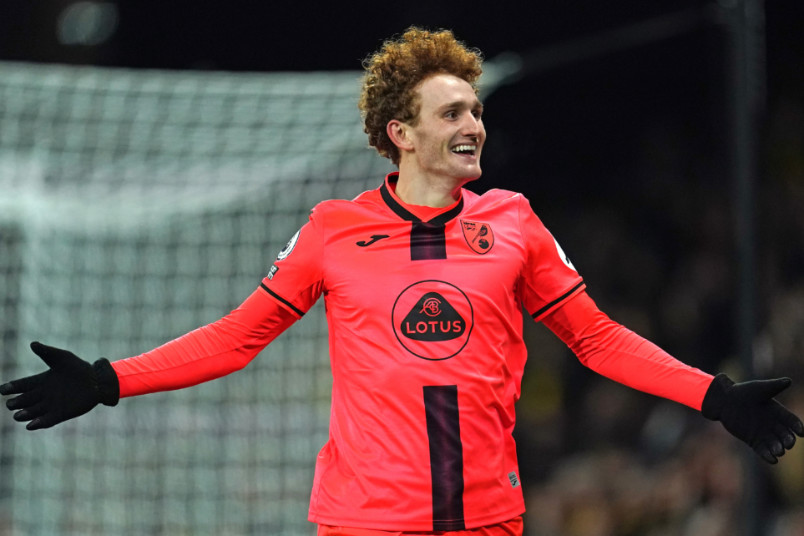 The roundup of USMNT players in Europe starts in the Premier League. Josh Sargent scored twice in Norwich City’s 3-0 win at Watford. Sargent scored in the 51st and 74th minutes with a stoppage time own-goal finishing off the scoring. Norwich is a point above the relegation zone in 17th place.

“It’s huge for us,” Sargent said. “Getting two wins in a row is massive for the guys and the confidence. Hopefully, we can take that into the next games. To get the first goal and put the game away with the second and third showed our character that we kept wanting to push on and I’m proud of the boys tonight. It’s about time for us to be clinical tonight! Hopefully we can continue that in the next games.”

Antonee Robinson and Tim Ream’s Fulham lost 3-2 at Stoke City. Falling behind in the opening minute, Fulham’s Rodrigo Muniz scored the quick equalizer in the 2nd. Fabio Carvalho put Fulham up in the 33rd with Stoke City equalizing in the 58th. Bobby Reid put Fulham up for good in the 72nd minute.

“Really difficult, like we expected it to be,” Fulham coach Marco Silva said. “It was a tough one, it’s always really tough to play here, Fulham’s last few results here weren’t the best. But we did really well.”

Matthew Olosunde subbed on in the 36th minute of Preston North End’s 1-0 loss at Swansea City in the Championship. The goal came in the 51st minute. Daryl Dike subbed out in the 53rd minute of West Brom’s 3-0 win at Peterborough United. Cedric Kipre scored in the 78th, Karlan Grant doubled the lead in the 85th, and Grady Diangana finished off the goals in the 89th. Dike injured his hamstring with an expected two weeks of recovery. A league down, Lynden Gooch’s Sunderland shutout Portsmouth 1-0 at home on an Elliot John Embleton goal in the 40th minute.

Moving to the 4th round of the Scottish Cup, Christian Ramirez scored for Aberdeen in their 3-0 home win over Edinburgh City. Ryan Hedges opened the scoring in the 23rd and Ramirez doubled the lead in the 44th Lewis Ferguson finished off the scoring two minutes into stoppage time.

Timmy Chandler subbed out in the 74th minute of Eintracht’s 2-0 home loss to Arminia Bielefeld in the Bundesliga. Eintracht fell behind in the 5th and Arminia scored again in the 27th. Chris Richards’s Hoffenheim lost 3-2 at home to Borussia Dortmund. Erling Haaland scored for Dortmund in the 6th and Andrej Kramaric equalized a minute into stoppage time. Dortmund’s Marco Reus scored in the 58th and a 66th minute own-goal made it 3-1. Georginho Rutter scored for Hoffenheim in the 77th.

Ricardo Pepi subbed out in the 57th minute of Augsburg’s 5-1 loss at Bayer Leverkusen. Trailing 1-0 from goals in the 9th and 24th, Augsburg’s Arne Maier scored in the 62nd. Leverkusen added goals in the 65th, 69th, and 81st minutes. Tyler Adams subbed on in the 55th minute of RB Leipzig’s 2-0 home win over John Brooks’s Wolfsburg. Willi Orban scored in the 76th and Josko Gvardiol finished off the goals in the 84th. Adams subbed out in the 82nd minute. Andrew Wooten subbed on in the 89th minute of Osnabruck’s 0-0 draw at Wehen Wiesbaden in the 3.Liga.

In Serie A, Tanner Tessman subbed out in the 66th minute of Venezia’s 2-1 win at Inter Milan. Thomas Henry scored for Venezia in the 19th with Inter equalizing in the 40th and going ahead in the 90th minute. Weston McKennie ‘s Juventus drew 0-0 at AC Milan. Andrija Novakovich subbed on in the 65th and assisted on Emanuele Cicerelli’s 72nd minute goal in Frosinone’s 1-0 win at Parma in Serie B.

Yunus Musah subbed out in the 88th minute of Valencia’s 3-2 loss at Atletico Madrid. Musah opened the scoring for Valencia in the 25th and Hugo Duro doubled the lead in the 44th. Atletico Madrid responded with goals in the 64th, 90th, and three minutes into stoppage time. Sergino Dest’s Barcelona shutout Alaves 1-0 on the road. Frenkie de Jong scored in the 87th minute. Shaq Moore subbed on in the 84th minute of Tenerife’s 4-0 home win over Oviedo in Serie B. Victor Mollejo put Tenerife up in the 6th and Eladio Xorrilla Jimenez scored in the 14th. Michel (79th) and Ruben Diaz (88th) finished off the goals.

Tim Weah subbed out in the 67th minute of Lille’s 2-0 loss at Brest in Ligue 1. An own-goal opened the scoring in the 3rd and Brest converted a penalty five minutes into stoppage time. Erik Palmer-Brown’s Troyes lost 2-1 at Angers. Brandon Domingues scored for Troyes in the 11th. Angers converted penalties in the 26th and 37th minutes.

Nicholas Gioacchini subbed on in the 71st minute of Montpellier’s 3-2 home win over Monaco. Elye Wahi scored for Montpellier in the 13th and Stephy Mavididi doubled the lead in the 32nd. Monaco responded with goals in the 34th and 81st, but it was Mavididi scoring again a minute into stoppage time.

Luca De la Torre’s Heracles drew 1-1 at home with Go Ahead Eagles in the Eredivisie. Kaj Sierhuis scored for Heracles in the 32nd with Go Ahead equalizing in the 73rd. Mark McKenzie subbed out in the 67th minute of KRC Genk’s 2-1 loss at Union Saint-Gilloise in the Belgian Pro League. Down from the 27th, Genk’s Paul Onuachu converted a 77th minute penalty. Union Saint-Gilloise scored ten minutes into stoppage time.

Reggie Cannon’s Boavista drew 1-1 at Pacos Ferreira in the Primeira Liga. After giving up a 42nd minute penalty, Boavista’s Kenji Gorre equalized in the 85th. Cannon saw yellow in first-half stoppage time. Tyler Boyd subbed on at halftime of Rizespor’s 0-0 draw at Hatayspor in the Super Lig. DeAndre Yedlin subbed on in the 88th minute of Galatasaray’s 2-1 home loss to Trabzonspor. Galatasaray’s Alexandru Cicaldau converted a penalty in the 31st. Trabzonspor equalized in the 84th and scored again in the 90th minute.