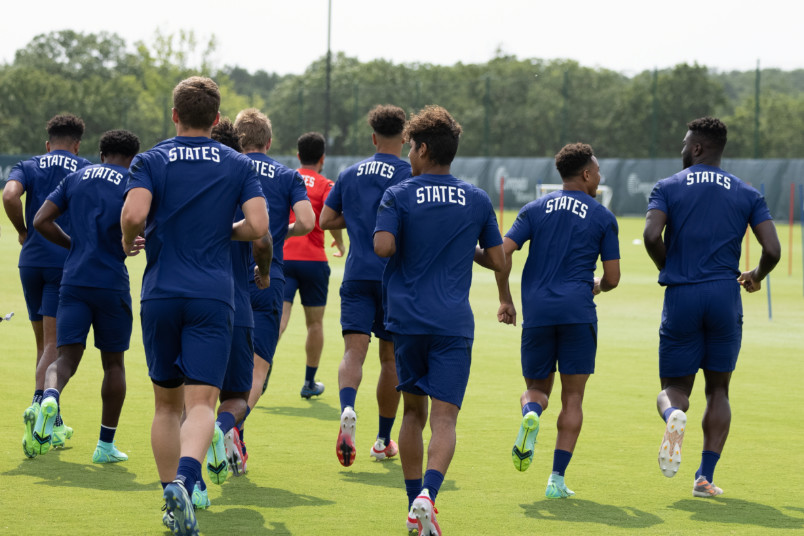 By Charles Boehm – WASHINGTON, DC (Jan 13, 2022) US Soccer Players – Like most of us, Gregg Berhalter tends to speak more expressively on topics he’s passionate about. The LA Times’ Kevin Baxter landed on one of those during Monday’s USMNT media availability from the current January camp in Phoenix when he broached the recurring subject of a proposed training facility for US Soccer.

“Kevin, you opened up a whole can of worms, I’ll tell you that,” said Berhalter with a smile. “I believe, and this is just my opinion, that it’s beneficial for us to have a national training center. And not only for consistency of the senior team, but also to have all the other teams, the ability for them to be there as well.”

It’s a seductive idea. Over the decades, names like Coverciano, the home of Italy’s national teams, and France’s groundbreaking Clairefontaine facility have become synonymous with the soccer renaissances they’ve helped foster. The United States could even be said to have a modest version of its own. “Bradenton” became a powerful shorthand for the youth residency program launched there by the incredibly successful 1999 Under-17 squad.

The 330-acre complex in the West Midlands countryside was more than a decade in the making. Delayed repeatedly by financial shortfalls, it was mothballed and nearly abandoned amid ferocious internal politics and the concurrent Wembley national stadium project. Though its total budget bloated to some $143 million, more than tripling original estimates, the Football Association’s new home finally opened in 2012. Since then, its 12 immaculate training fields and other state-of-the-art features, built with the capacity to host every level of the national teams simultaneously, have become the cradle of a world power’s rebirth.

“I’ve been around the world and was lucky enough to see some of the national training facilities of other countries, like St. George’s in England,” said Berhalter. “And it’s a laboratory, man. You see all the coaches interacting, you see the teams there, and really, the players feel at home. But that’s a big project, man, that doesn’t come easy. When you think about COVID times and some revenue loss, it’s not an easy thing to get done. But I would much prefer that.”

At this point, it’s natural to ask, “wait, don’t they already have a couple of those?”

At the start of this century, US Soccer partnered with the LA Galaxy and AEG to create what is now called Dignity Health Sports Park. The fields and indoor spaces used by the national teams were dubbed the “National Training Center,” offering 365-days-a-year playing conditions in sunny Carson, California. Even with ten practice fields across 125 overall acres of space, it didn’t take very long for that cohabitation to feel snug to some.

“We share [that venue] with the true owners, which is the Galaxy and AEG,” former USSF president Sunil Gulati said in 2014. “We think that it’s important to have a place that is our own, that we can do all the things, from youth to senior level.”

In 2018, a comparable arrangement with Sporting Kansas City produced the $75m Compass Minerals National Performance Center. The Federation dubbed it the National Development Center to help distinguish it from the Carson site. The “soccer village” serves as Sporting’s training ground and the base of the Federation’s coaching education programs. It also anchors a “STAR bond district,” an economic development initiative that provided upfront state financing.

By all accounts, it’s comfortable and well-appointed with cutting-edge technology and located at the very center of the country. The senior national teams have only occasionally visited for extended periods, however. Climate is a big reason why, as Midwestern winters make it a less appealing venue in the cold months. That’s why Berhalter and his USWNT counterparts have often chosen warmer places like Austin, Texas, Chula Vista, California, and Bradenton, Fort Lauderdale, and Orlando in Florida during those times of the year.

“We provide four seasons, which can be important, especially during [World Cup] qualification, and then the other piece too is that centrally located, to be able to travel from east or west, being in the middle helps, I think, the national team immensely from a travel perspective as well,” SKC manager and sporting director Peter Vermes told USSoccerPlayers.com this week. “I don’t think I have to try to pump up the facilities, the facilities are best in the country, and I know Gregg would agree because he’s been here and he says it every time he’s here … but they obviously need something in a warm climate, I would assume, as well. Because if they’re trying to get ready for something in January, I mean, we can’t even do preseason here in January, so I understand that that would be a necessity.”

You can see how quickly the basic parameters of a definitive solution for an NTC have narrowed here. Assume mild year-round climate conditions, geographical accessibility, ample field capacity, modern technology, and robust indoor facilities are requirements. In that case, there’s only so much real estate in play, and it probably wouldn’t come cheap.

As Berhalter mentioned, the Federation is just beginning to emerge from the deficits and severe financial cutbacks inflicted early in the pandemic. As St George’s Park shows, the cost of a project like this could easily run into nine figures. Then there’s the more intangible question of whether one main location would disadvantage certain regions or populations.

“I think our country is so big that just having one training facility is probably not feasible. I’m not talking about financially, I’m talking about more just from a location perspective,” Vermes said.

A sudden jolt of internal federation politics may turn out to work in Berhalter’s favor. Former USSF president Carlos Cordeiro stepped back into the spotlight this month to challenge his successor, Cindy Parlow Cone, in the election set for the US Soccer’s annual general meeting in Atlanta in early March. Part of his platform is the following:

“I will work to finally realize our long-held dream of a new year-round National Training Center so that our world-class athletes have access to world-class facilities. Every other soccer nation has such a center, and it’s time the United States has one as well, especially as we prepare for 2026 and beyond.”

If Parlow Cone wasn’t already planning to make this topic a talking point of her own, that might have clinched it. She even suggested a somewhat aggressive timeline when asked about the matter in a media availability this week.

“This is an important thing for our country,” she said. “I think we have started talks with different groups, and putting a plan together on moving the national training center from something that would be nice to have to logistically figuring out all the logistics that go into that, and doing the feasibility and timelines. For me, I think it would be perfect to have a national training center ready before the World Cup in ’26.”

It’s tough to know how a training center might resonate with voters. US Soccer politics tends to be dominated by the concerns of Federation members that can seem opaque to outsiders. If it does, then the Cone-Cordeiro competition could well push it closer to reality faster. Current USSF CEO Will Wilson suggested that he’s ready to allocate both political and fiscal capital soon.

“Look, I think everyone would agree that having that type of facility would be ideal, and fantastic. Obviously, a lot of work has to go into that,” he said in this week’s availability. “Cindy mentioned feasibility and the right sort of process. So we’re starting that. We’re going down that track. Obviously, the concept of an NTC has been discussed for quite some time. So it would be great to have, and to Cindy’s point, we’d like to try and transition away from it being a ‘nice to have’ to something that we can actually action.”

The USMNT won’t have to qualify for the 2026 World Cup. The pursuit of a long-term home for the program might just become the great quest of the next four years instead.