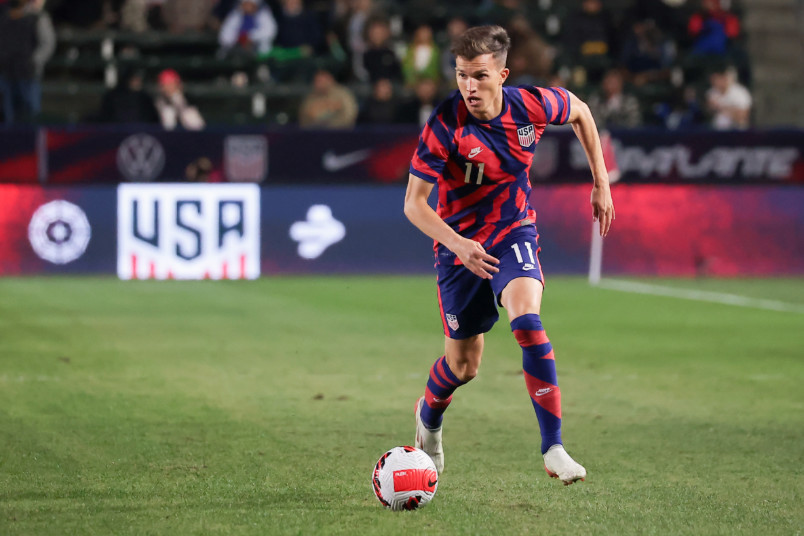 Friday’s soccer news starts with another move to Europe for a USMNT player. Colorado Rapids midfielder Cole Bassett got his debut and first goal with the senior squad on December 18 in the 1-0 friendly win over Bosnia. Called into the January camp, Bassett left early to complete an 18th-month loan deal to Eredivisie club Feyenoord.

“We’re incredibly proud of Cole for having earned this opportunity to pursue his dream of playing in Europe,” Rapids GM Padraig Smith said in a press statement. “It’s a testament to his talent, his performances here with the Rapids and his dedication to continually improve as a player. This move also reflects our steadfast commitment to develop young players and provide a pathway to the highest levels of the game. We look forward to seeing Cole’s continued growth and wish him all the best as he takes this next step in his career.”

Feyenoord is in 3rd-place in the Eredivisie with 39 points after 19 rounds. They trail 2nd-place Ajax by six points and 1st-place PSV by seven. Those three clubs are normally the ones fighting for titles in the Eredivisie. The last time a different team won the Dutch title was Twente in 2009-10. Feyenoord last lifted the shield in 2016-17.

The Eredivisie is 7th in the UEFA coefficient. That means the top two finishers qualify for the Champions League with 1st-place entering in the group stage and 2nd in the third qualifying round. The 3rd-place finisher now qualifies for the Europa Conference League. The league uses a playoff system for their other Europa Conference League spot, with 4th through 8th competing after the end of the regular season. After that, the Europa League qualifying spot goes to the winner of the KNVB Beker, the Dutch domestic cup. Feyenoord exited the cup in the second round, losing 2-1 at Twente after extra time on December 15.

Feyenoord is still alive in this season’s Europa Conference League, winning group E. They’re waiting on the knockout phase to find out who they’ll play in the round of 16 on March 10 and 17. The knockout round in Europe’s new competition includes the 2nd-place finishers in the Europa Conference group stage and the 3rd-place teams that dropped from the Europa League.

There are several clubs with USMNT players in the knockout round. Konrad De La Fuente’s Marseille plays Qarabag, Richy Ledezma’s PSV vs Maccabi Tel Aviv, and Cameron Carter-Vickers’s Celtic faces Bodo/Glimt. Those games are set for February 17 and 24. Bryan Reynolds’s AS Roma also advanced to the round of 16 as group winners.

Saturday has the Premier League on USA: Everton vs Aston Villa at 7:30am and Leeds vs Newcastle at 10am. Southampton vs Manchester City is on NBC at 12:30pm.

Super Lig on beIN Sport: Sivasspor vs Fenerbahce at 8am and Basaksehir vs Goztepe at 11am. Serie A on CBS Sports: Genoa vs Udinese at 9am. Ligue 1 on beIN Sport: Brest vs Lille at 11am and Lens vs Marseille at 3pm. Primeira Liga on GolTV: Tondela vs Vizela at 1pm and Sporting vs Braga at 3:30pm.

Sunday has the Premier League on USA: Arsenal vs Burnley at 9am.

Ligue 1 on beIN Sport: Metz vs Nice at 7am, Clermont vs Rennes at 9am, Montpellier vs Monaco at 11am, and PSG vs Reims at 2:45pm. beIN en Espanol has Nantes vs Lorient at 9am. La Liga on ESPN Deportes: Granada vs Osasuna at 8am. Primeira Liga on GolTV: Gil Vicente vs Portimonense at 1pm and Porto vs Famalicao at 3:30pm.

Liga MX on Univision: UNAM Pumas vs Tigres at 1pm and ESPN Deportes: Santos Laguna vs Necaxa at 8pm.

Monday has the Cup of Nations round of 16 on beIN Sport: Guinea vs Gambia at 11am and Cameroon vs Comoros at 2pm. All Times Eastern