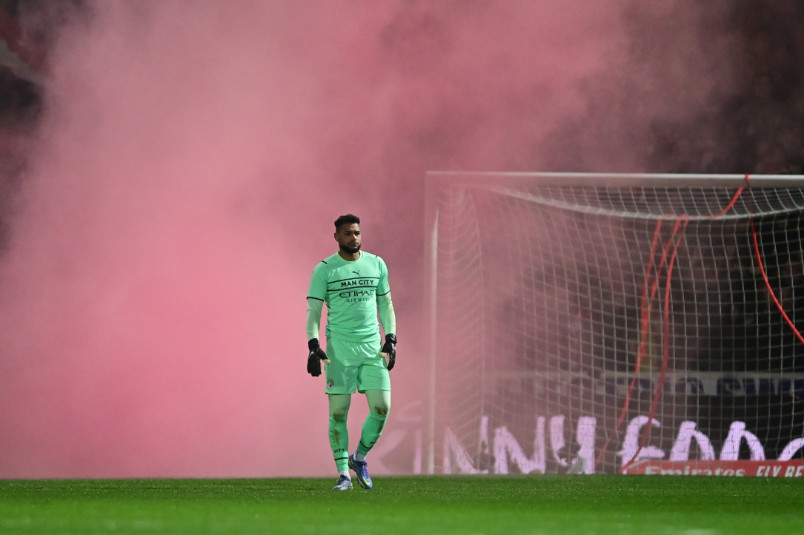 The roundup of USMNT players in Europe starts with the third round of the FA Cup. Zack Steffen was in goal for Manchester City’s 4-1 win at Swindon Town. Bernardo Silva opened the scoring for City in the 14th, Gabriel Jesus doubled the lead in the 28th, and Ilkay Gundogan made it 3-0 in the 59th. Swindon Town pulled a goal back in the 78th, but Cole Pamer added a fourth for City in the 82nd minute.

“We were facing a big challenge in the FA Cup,” Manchester City assistant Rodolfo Borrell said taking charge of a squad missing the manager and several players due to COVID positives. “It is always challenging and if you don’t take it seriously and start on the front foot, you are in trouble, even with the difference in terms of quality. I think we started very well on the front foot and very quickly we scored a goal, then another and could have had two or three more.”

Christian Pulisic exited in the 59th minute of Chelsea’s 5-1 home win over Chesterfield. Timo Werner opened the scoring for Chelsea in the 6th minute, Callum Hudson-Odoi made it 2-0 in the 18th, and Romelu Lukaki scored in the 20th. Andreas Christensen scored in the 39th and Hakim Ziyech converted a penalty in the 55th minute. Chesterfield pulled a goal back in the 80th.

“We started strong and decided the match very early,” Chelsea manager Thomas Tuchel said. “This is what we wanted. At 5-0 we had a lot of changes in some crucial positions, and had some players who lacked a bit of rhythm and confidence in the position they were playing. So the last 20 mins I would have wished for a few more chances and more clinical finishing, but okay, the job is done.’

In League One, Lynden Gooch’s Sunderland drew 3-3 at Wycombe with an own-goal putting Sunderland up in the 3rd minute. Wycombe responded with goals in the 13th and 36th. Ross Stewart equalized in the 39th and scored again three minutes into stoppage time. Wycome equalized five minutes later.

Moving to the Bundesliga, Chris Richards’s Hoffenheim came back to beat Augsburg 3-1 at home. Augsburg went up in the 5th minute through a Michael Gregoritsch goal with Ilhas Bebou scoring for Hoffenheim in the 38th and 44th minutes. Hoffenheim’s David Raum finished off the goals three minutes into stoppage time. Ricardo Pepi subbed on in the 60th minute in his debut for Augsburg.

Tyler Adams’s RB Leipzig beat Mainz 4-1 at home. Andre Silva converted a 21st minute penalty and Dominik Szoboszlai scored in the 47th. Mainz pulled a goal back in the 57th, but Christopher Nkunku scored for Leipzig in the 58th and Silva got a goal in the 61st minute. John Brooks’s Wolfsburg lost 1-0 at VfL Bochum to a 65th minute goal.

Julian Green subbed on in the 89th minute of Furth’s 0-0 home draw with Stuttgart. Timmy Chandler’s Eintracht lost 3-2 at home to Borussia Dortmund. Rafauel Borre scored for Eintracht in the 15th and 24th. Dortmund’s Thorgan Hazard pulled a goal back in the 71st and Jude Bellingham equalized in the 87th. Mahmoud Dahoud scored Dortmund’s winner in the 89th minute. Chandler saw yellow in the 88th.

Matthew Hoppe subbed on in the 74th minute for Mallorca’s 2-0 home loss to Levante in La Liga. Levante scored in the 47th and seven minutes into stoppage time, playing a man down from the 82nd. Yunus Musah subbed out in the 66th minute of Valencia’s 4-1 loss at Real Madrid. Trailing from a 43rd minute penalty and goals in the 52nd and 61st, Goncalo Guedes scored for Valencia in the 76th. Real Madrid scored again in the 88th. Musah saw yellow in the 58th minute. Matt Miazga’s Alaves drew 0-0 at home with Athletic.

A league down, Shaq Moore subbed on in the 73rd minute of Tenerife’s 1-1 draw at Amorebieta. Trailing from the 14th minute, Tenerife’s Enric Gallego converted a 27th minute penalty.

Weston McKennie’s Juventus won 4-3 at Roma in Serie A. Trailing from an 11th minute Tammy Abraham goal, Paulo Dybala equalized for Juventus in the 18th. Roma retook the lead with goals from Henrikh Mkhitaryan (48th) and Lorenzo Pellegrini (53rd). Manuel Locatelli pulled a goal back for Juve in the 70th and Dejan Kulusevski equalized in the 72nd. Mattia De Sciglio scored Juventus’s winner in the 77th minute. Juventus finished a man down with a red card to Matthijs de Ligt in the 81st.

Gianluca Busio subbed out in the 79th minute of Venezia’s 3-0 home loss to AC Milan. The goals came in the 2nd, 48th, and from a 59th minute penalty.

Konrad de la Fuente subbed on in the 79th minute of Marseille’s 1-0 win at Bordeaux in Ligue 1. Cengiz Under scored in the 37th minute. Reggie Cannon’s Boavista drew 1-1 at home with Tondela in the Premieria Liga. Trailing from the 71st, Jeriel De Santis equalized for Boavista in the 88th minute.

Tyler Boyd subbed out in the 61st minute of Rizespor’s 2-2 home draw with Besiktas in the Super Lig. Down to a 25th minute penalty, Joel Pohjanpalo equalized for Rizepor in the 56th. Besiktas went ahead in the 60th, but Pohjanpalo scored again in the 68th. Both teams finished a man down with Gokhan Gonul exiting for Rizepor in the 85th and Besiktas seeing red a minute later.