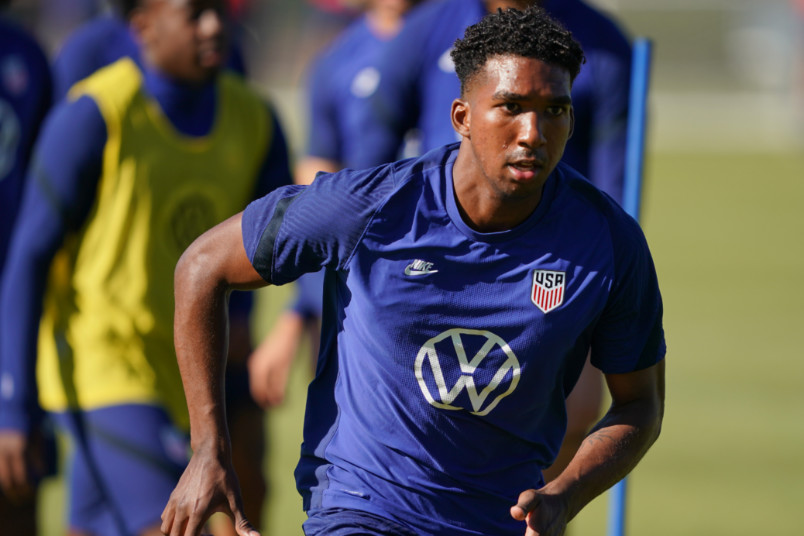 By Jason Davis – WASHINGTON, DC (Jan 14, 2022) US Soccer Players – For most soccer fans, the transfer market and its many vagaries are part of the appeal of following the world’s game. Tracking the rumors and intrigue that comes with the multi-million dollar moves that dominate headlines adds a dash of off-the-field drama to the events between the lines.

Soccer has levels when it comes to its transfer sagas. The most famous names and most precocious talents command most of the attention, particularly because the fees to purchase their rights can soar into the tens of millions of dollars. There’s a prestige that comes with a hefty price tag. Beyond the obvious revenue boost, an expensive sale means to a club, pulling off a big deal or a flashy purchase can put a team on the map. In the case of MLS, that can also work for an entire league.

Major League Soccer is starting to reap the rewards of entering the world transfer market on a meaningful level. Through both the organic development of players in MLS-run academies and via the purchase and sale of talented players from abroad, America’s top division can now claim both a significant revenue stream and the ancillary benefits of being a “selling league.”

Whatever else marks the MLS 3.0 era, it’s that push to making investments in players pay off that is most striking. MLS commissioner Don Garber clearly stated the league’s intention to do so at his State of the League address in 2018. The league lived up to his words. With millions coming in for players like Gianluca Busio and Ricardo Pepi, MLS can leverage player sales into stronger clubs and a better competition.

It took 25 years to get to this point. To describe the process as difficult, time-consuming, and expensive would be to understate the challenge by orders of magnitude.

That’s why any progress on that front from America’s second division is a reason to celebrate. Simply because of the presumed quality difference between a first division league versus a league operating further down the ladder, the USL Championship will have a tougher time carving out its place in the world transfer order.

Finances are different at the USL Championship level. What MLS clubs bring in and spend on their operations pales in comparison to clubs in Europe’s top leagues, but the USL Championship clubs operate at levels well below MLS. Total payrolls typically sit between $1 and $2 million, with few players breaking six figures in annual salary.

American second division clubs don’t often run well-funded academies or have the resources to make the academy teams they do run free for all. Carving out pathways for players to move into Championship rosters out of the academy is difficult work that will take years to make stick. In the Wild West environment of lower-division soccer in the United States, it’s a victory for a club to make it to five years of continuous operation, much less develop players who can graduate to the first team.

The Championship is making progress, despite the realities. The league has years of stability, even as the makeup of the competition changes from year to year because of MLS expansion, shrinking budgets, Federation sanctioning, and MLS launching its own third division.

In the late summer of 2021, Louisville City announced the sale of 18-year-old left back Jonathan Gomez to Real Sociedad of La Liga. Gomez was a highly regarded prospect when he arrived at LouCity from his native Texas. Choosing a Championship club, Gomez now shows that there’s a way for an American soccer player to develop outside of MLS. While Louisville’s fee from selling Gomez on is relatively modest, it represents a milestone on the league’s journey to full engagement with the transfer market.

USL’s professional clubs are unlikely to be in a position to lay down millions for a transfer. However, the stability of those clubs will improve immensely with even limited outgoing transfers. It creates a different business model for lower division American soccer.

Gomez’s move from Louisville to Real Sociedad came about through the persuasive powers of former Louisville City head coach John Hackworth. LouCity offered the promise of immediate playing time in a growing league. Gomez’s success getting a move abroad could encourage talented young players to consider or stay with USL Championship teams over the higher profile environment of MLS. If a player needs a stop on the way to Europe because of FIFA’s age restriction, the USL presents a professional atmosphere without the pressure of MLS or its restrictive contract requirements.

Orange County’s Kobi Henry looks set to follow in Gomez’s footsteps. After spending time as a youth player with Orlando City and Inter Miami, Henry chose to sign with Orange County instead of entering into a Homegrown contract. The assumption is that Henry’s arrival in Orange County came with the understanding between the club and the player that he would get his chance to leave for Europe as soon as he reached his 18th birthday.

Then there’s the most recent confirmed transfer involving a USL Championship player and the potential significance of the fee. Birmingham Legion, the third-year club building a presence in Alabama’s biggest city, sold Jamaican striker Junior Flemmings to Toulouse of Ligue 2 in France for a reported $500,000.

It’s the biggest fee ever received for a USL Championship player and a possible indication that clubs in Europe are keeping tabs on the lower divisions in the United States. Flemmings is a Jamaican international and benefits from his Reggae Boyz profile. Still, it’s hard to imagine Toulouse would spend six figures on a player without tracking his play in the Championship.

The league’s push for better broadcast platforms, including internationally, will pay dividends that go beyond attracting more fans. Flemmings’s transfer could be an example.

Flemmings doesn’t exactly count as a young player, and Birmingham didn’t play a role in his development. That doesn’t change the money involved or take away from the watershed potential of his deal. If other clubs can do the same, it could remake the second division of soccer in the United States.

The money changing hands isn’t massive by the standards of the top clubs in the world. It’s not even big enough to compare to what MLS is pulling in for its outgoing transfers. For the USL, however, it can only be called one thing: game-changing.